Over the years, every time we watch Lucas Puig footage, it’s like uncorking an aged bottle of wine from your own wine cellar. There’s a slight taste of nostalgia with every sip, but endorphins soon hit once you realize that it’s a completely new and refreshing experience. Lucas has had an amazing career in skateboarding, earning his stripes from the days of Lakai and Cliche, to becoming a foundational member of the Adidas skateboarding Pro team and joining Palace Skateboards. As many of our earlier readers may know, we tested the first Puig model ten years ago, and worked with adidas to a special Weartested event for the Lucas Premiere ADV in Shanghai. It’s been incredible seeing the progression of Lucas’ pro models over the years, and the new technical advancements that have been made to ensure that the end consumer can get an incredible skate shoe tailored to Lucas’ specs. Without drawing this out any longer, we’d like to present the newly released Adidas Puig Indoor shoe model. Read on below to see how the new lightweight take on the Puig model performed in our 10 hour weartest.

The Adidas Puig Indoor fits true to size; we recommend going for the size you usually wear in adidas.

The three main areas to evaluate the durability of a skate shoe include the toe area, the mid foot area, and the outsole. With the toe area, the Puig Indoor features a durable suede one piece toe cap which held up well during our weartest, but did have noticeable signs of wear. As you can see from the pictures, the most worn down areas of the shoe were within the Ollie-area area, which is typically a weak spot for most skate shoes. Moreover, the stitching which connects the suede toe piece and the midfoot mesh piece ripped. When it came to the midfoot area, it performed quite well during our skating. There was a small flaw around the heel collar; although the material was extremely comfortable, the collar gets shredded up quite quickly. We examined the last part of our durability test, which was the shoe’s outsole. The side areas of the outsole were quite thin but they did help protect the toe area and the durability was great, with the bottom of the outsole showing very slight signs of wear. Overall, the Puig Indoor’s durability test had a balance of pluses and minuses.

The cushioning of the Puig Indoor was surprisingly good, for a vulcanized shoe model. The Adiprene sockliner is quite thin and had the same thickness from end to end. However, the main cushioning element is the EVA midsole, which varied with thickness. The midsole was designed thinner in the front and thicker in the heel. Based on this construction, it was possible to achieve both excellent boardfeel and cushioning abilities in one sole construction. Thus, the Puig Indoor can cushion relatively tough landings which noticeably reduces the danger of heel bruises. As a result, the shoe can be recommended not only for low impact skating but also for slightly tougher landings as it manages to cushion bails quite successfully.

When we first tried them on, the heel, midfoot and toe area felt quite snug on the feet, which was a huge plus. The toebox area of the adidas Puig indoor is definitely inspired by the cupsole version but has a more rounded tip. The clean and pointed shape of the shoe offered great flick and allows plenty of control while doing flip tricks. The suede also felt thicker than expected, which helped hold the rigidity of the shoe throughout the 10-hour test. Another plus, was the lack of creases and wrinkles in the suede.

As aforementioned, the forefoot cushioning of the model was quite minimal, which is a characteristic that helped in maximizing boardfeel. This is exactly what the Puig Indoor excelled in. The boardfeel was exceptional; the sole itself is quite thin, which minimizes the space between the foot and the board, and allows for more control for flip tricks and pop. The toe area was the best part, where the sole was the thinnest and boardfeel was amazing. Moreover, the pattern of the sole itself is quite soft, and after a few sessions, the sole broke in nicely to adapt to the concave of our feet and board. In the end, this proved to be very effective, helping immensely with flip tricks. The outsole of the shoe has the same aesthetic of the cupsole Puig model and supports the flexibility of the sole unit. The combination of a wide and thin treaded pattern on the shoe also helped in adapting to the concave of the board and maximizing boardfeel.

The Puig Indoor is a very comfortable shoe. The selection of material chosen for the upper was a mix between suede, synthetic materials and mesh. When designing the shoe, the adidas Skateboarding product designers made sure that the materials were positioned in areas where they performed best. Sometimes, vulcanized shoes can be very heavy, but with this model, we were pleasantly surprised with how lightweight the shoe was. The shoe’s stability is slightly above average. The shoe hugs the feet very well and creates a secure feeling of not slipping out even though the shoe is a very low cut model. With that said, due to the technical design focusing more on providing boardfeel, the Puig Indoor model had a minimal amount of padding and reinforcements in the heel, which sacrificed on heel support. 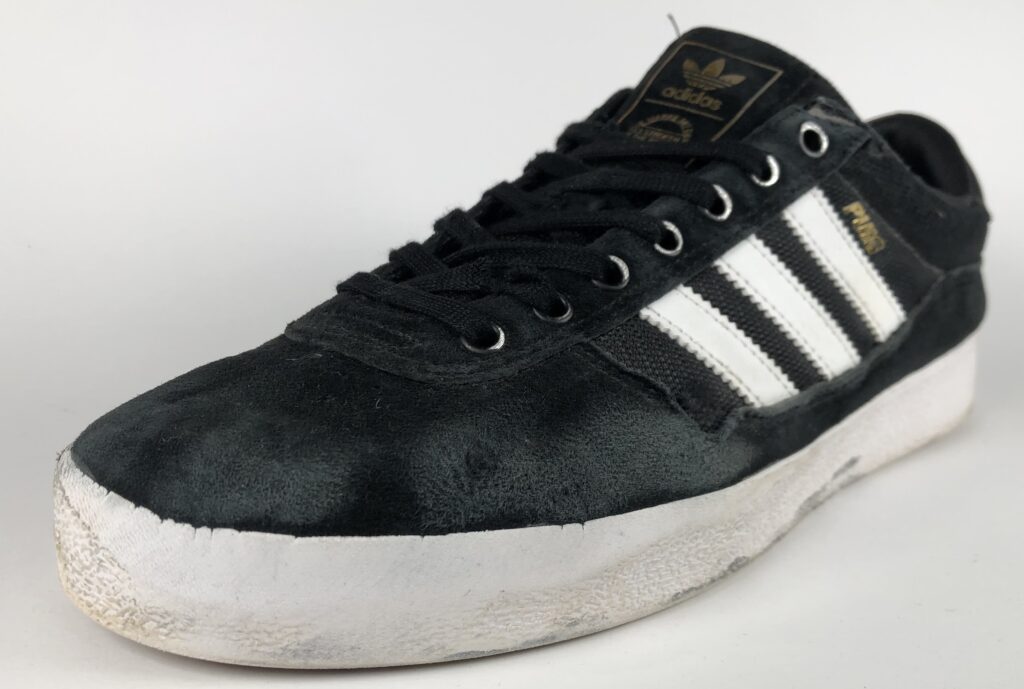 The Puig Indoor, Lucas Puig’s lightweight vulcanized version of his Pro Model, offers extremely impressive boardfeel and grip, while also surprising us with its cushioning performance. Durability of the shoe could be better, and although stability was not the main focus of the model, it could also be improved with some heel reinforcements. In all, the Puig Indoor is a great looking shoe with impeccable performance capabilities for technical low impact to mid-grade impact skating.