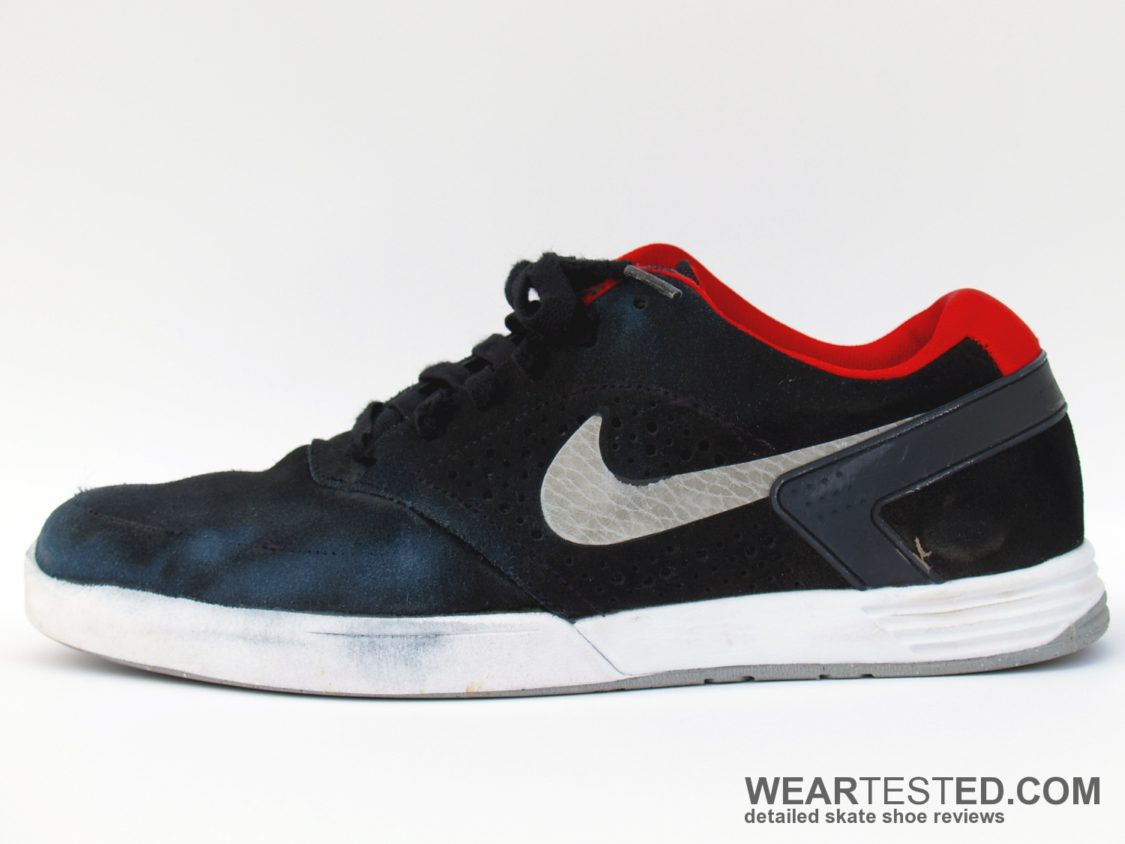 With the variety of brands, team- and pro model skate shoes, it is not an easy task to pick the most relevant, interesting and innovative ones to review them. In many cases choices need to be made that cause good shoes not to be reviewed at the end of the day due to a lack of time. This unfortunatelly also happend to the the Nike SB Paul Rodriguez series until now.  With the just released 6th iteration of the PRod this will finaly come to and end. Weartested proudly presents the Nike Paul Rodriguez 6 review.

It only feels like yesterday that Paul Rodriguez made a sponsor change for the history books in 2004 – from the then well-established and successful éS to the relatively young Nike SB division. The move was eyed suspiciously by many, with more than a few  screaming “sell out”. Times change, and oh, how they changed.

In 2012, éS footwear delivered its last collection and is un­fortunately going on hiatus for now. Nike SB, on the other hand, is more popular than ever, not just with consumers but also professional skateboarders as employer of choice. It’s a controversial topic that can be seen and discussed from many perspectives, but a fair share of those changes can be credited to the high quality of the products that Nike SB has released in recent years. On first inspection, the 6th iteration of the Paul Rodriguez signature shoe doesn’t seem to be an exception. A more detailed view is given in the following lines.

The Paul Rodriguez 6 is durable for several reasons. The now-standard one-piece toebox with decorative stitching reaches to almost the middle of the shoe. However, it meets the sidepanel in the ollie area and the connecting double-stitching is therefore affected by the griptape. During the test duration of 10 hours, the stitching ripped partly through in this area. Nevert­heless, the generous overlapping and the overall stability of the model prevented a hole. Furthermore, the angle at which both panels meet causes the top layer to be pulled over the toebox layer when doing tricks. This prevents the gap from spreading and the durability is maintained for long-term use, too.

Due to the long toebox design and the drawn-back middle area, it is also possible to include a large number of big ventilation holes in the sidewall without a major reduction in durability. The rubber outsole is of medium thickness and comes in for a lot of wear because the suede toebox is rather low. As a result, it developed slight grooves during the test period where the upper material bellow became visible. Since the suede is of high quality and the wall thickness of the rubber increases towards the bottom sole, this is only a minor issue though. Additional details, like the fused Swoosh, which can’t peel off like it did with previous models, or the inward-facing mesh at the collar, contribute further to the shoe’s good durability. The shorter mesh tongue, which is hidden and pro­tected by the high peak of the sidewall, suits to the longevity of the design, too. However, a slight weakness occurs due to the long toebox.

The big suede panel lacks reinforcement and becomes wavy with wear. This could cause single points of attack for the grip­tape, resulting in holes in the long run. Finally, the laces. Compared with previous models, the Paul Rodriguez 6 features a tighter eyestay arrangement. The drawn-back sidewall and the fact that there are only 5 eyelets mean the laces are protected to a certain degree and stay intact for quite a long time. Crucially, the often-critical top eyelet is protected by the high peak of the sidepanel, which bends outwards when the shoes are tightly laced.

The Nike SB Paul Rodriguez 6 is suited for high-impact skating. The use of Lunarlon foam enables it to dampen harsh landings and bails quite well. The cushion capabilities can already be felt while walking or just pushing in the shoe. 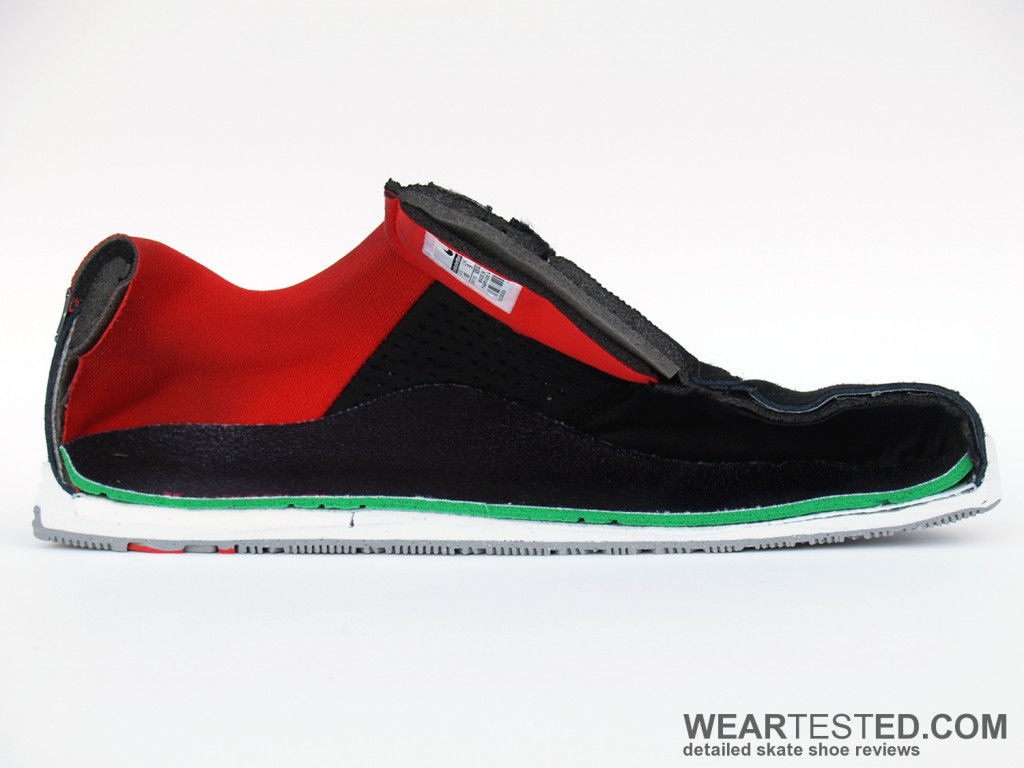 The combination of a rubber outsole in the front for durability and a foam outsole in the middle and heel area makes sense in terms of durability, weight and cushioning. As can be seen in the cross section, the foam thickness increases heavily towards the back, which ensures a soft ride. The use of midsole foam instead of a removable Lunarlon insole is especially advantageous for people who like to use orthopedic insoles. The removable insole can be replaced without losing the Lunarlon cushioning.

The breathability of the PRod 6 is way above average for several reasons. It features a thin, mesh tongue that allows airflow at the instep of the foot, a key region. This is a feature seen in more and more models. Additionally, it has perforated sidewalls. Both the bigger diameter and the number of perforations are exceptional and ensure good breathability. What makes it really special is the fact that not just the upper layer is perforated but the inner material as well. Unfortunately, this is rarely the case for skate shoes. It allows continuous airflow through the sidewalls and makes a noticeable difference.

The fine sole pattern of the Prod 6 features good grip. The flexibility is not completely there straight out of the box, so a week of wearing-in time is recommended. After the initial sturdiness is gone, it adapts well to the concave of the deck and the improved contact surface keeps the feet from slipping. 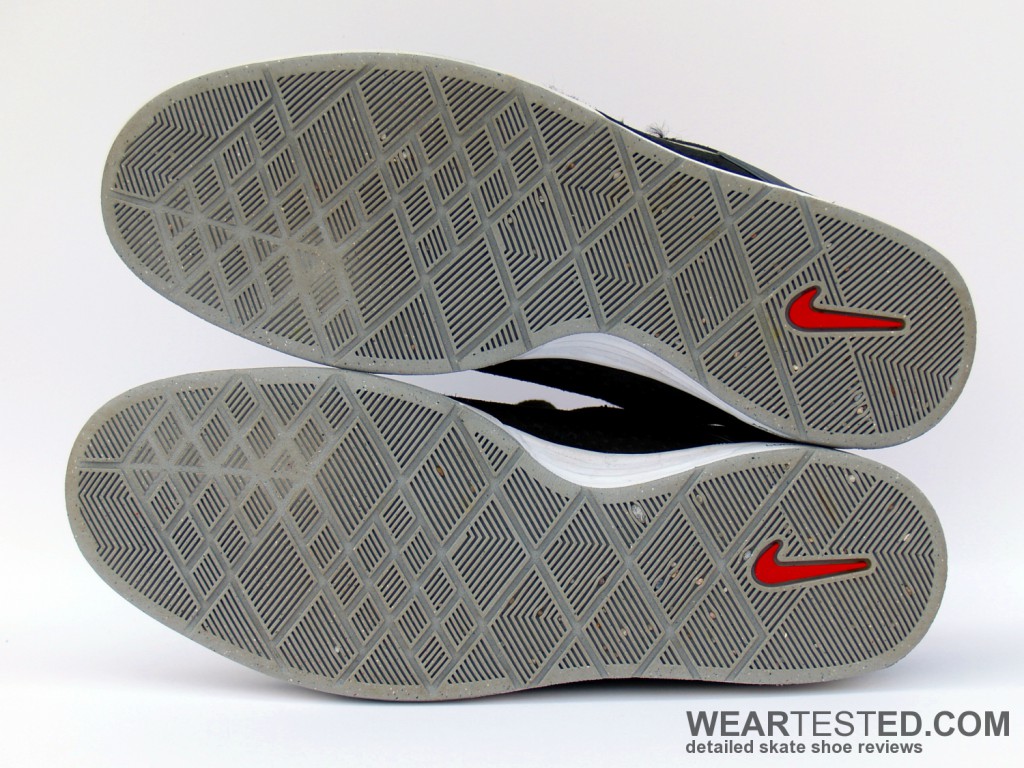 The fine, rectangular shapes with the thin and soft lamellae and the flex grooves in between create the typical soft grip of cupsoles that still allows switching of the foot position. The sticky feeling of a vulcanized sole is not completely reached though. Due to the limited height, the initial grip decreases slightly with wear, with flat areas appearing after the 10-hour testing time, which is a minor flaw of the model.

There has been a silent revolution in the PRod signature foot­wear range regarding shape.

While earlier models like the 3 where bulky to say the least, the 5 was a turning point to some degree and the 6 continues this direction of a significantly thinner, closer-to-the-foot and more-streamlined silhouette. The toebox of the newest iteration is well rounded with an overall arrow shape; it tapers slowly from the bottom eyestay to a centered, rounded peak. Also, the collar and heel are noticeably thinner and narrower, which create a cupsole model that is close to the shape of the Nike SB Koston 1 in regards to padding and width.

As could be expected of a cupsole model with a foam middle sole, the boardfeel is well balanced and not as direct and some­times painful as a thin vulcanized sole. The thinner front allows for good contact with the board that gets better with wear and the resulting increase of flexibility. The heel region, which only plays a minor role regarding boardfeel, offers necessary cushioning. Overall, the shoe offers direct contact to the board, but the balance between boardfeel and protection leans slightly towards impact control.

Paul Rodriguez’s newest model features a well-designed inner lining. It doesn’t feature tongue-centering straps that could cause discomfort, but the tongue still stays in place most of the time and adjustments are barely necessary. The stitching in­side the shoe is limited to a minimum and overlapping panels are attached to each other by very flat or even hidden stitching to ensure a comfortable lining. A special design feature is the heavily bent collar in the area of the Achilles tendon. It faces far towards the tongue, which results in a superior heel lock – the foot is securely kept in position and doesn’t slip out at any time. Initially, it feels quite different and the feet have to get used to the tight fit around the tendon, which may cause friction, but after a few sessions, and combined with the soft, mesh material in the region, it feels very comfortable. A minor possible improvement would be the use of a more ergonomically shaped and thereby more supportive insole with a noticeable wedge under the middle foot. The previously mentioned use of Lunarlon also means that local stresses are distributed evenly around the feet, so they don’t get as tired even after long sessions.

The heel design is maybe the most obvious new feature of this model. As well as the rigid plastic reinforcement in the heel, which can be seen in the cross section as a white line, it is equipped with an external element, too. It seems to be inspired by basketball and outdoor designs and adds a certain amount of rigidity. All in all, though, it seems to be more of a design feature  and dynamic movement of the foot is still possible as usual. The higher cut bellow the ankle that rises  towards the tongue caused mixed feelings among the testers. On one hand, the additional support feels protective and safe, but on the other, if you are used to lower cuts, it can cause friction that can be uncomfortable. Overall, the model offers very good support for a low top that is above average even for a cupsole design.

The Nike SB Paul Rodriguez 6 offers superior breathability and is suitable for high-impact skating. While being durable, comfortable and very supportive, it features a slimmed-down silhouette compared with its predecessors, as well as solid grip and boardfeel.