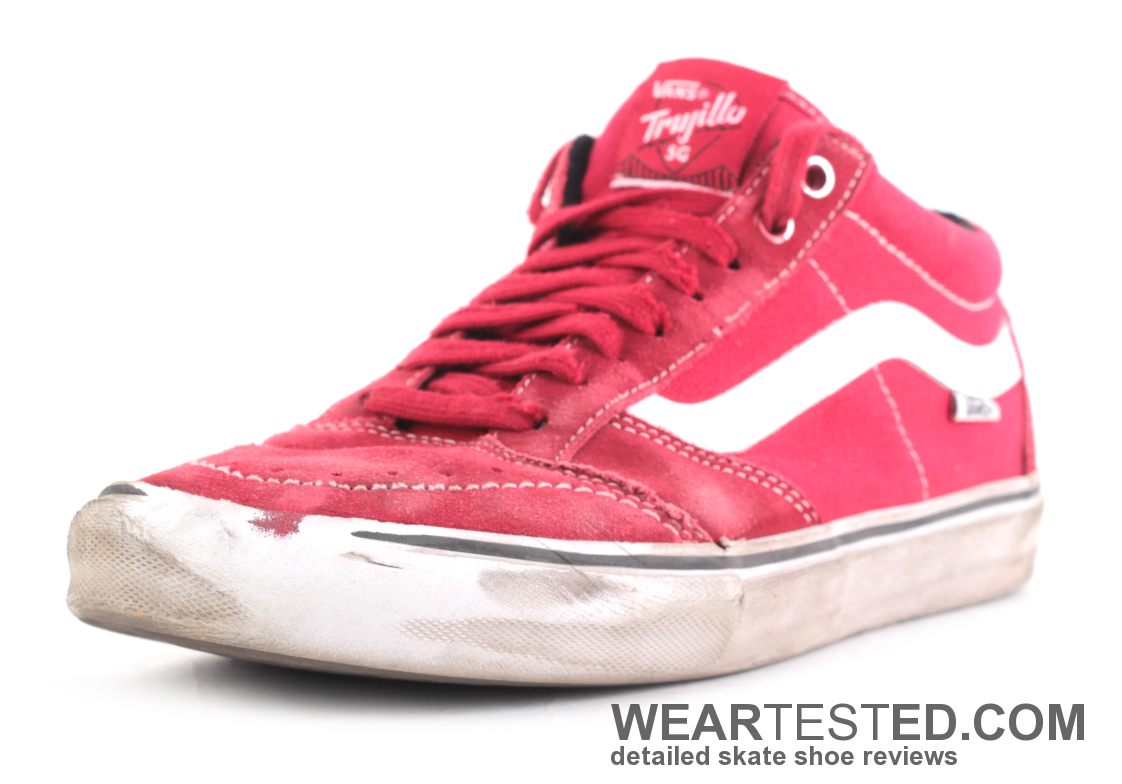 When you think of a raw not-giving-a-fuck skateboarding attitude, the first person that should come to your mind is Tony Trujillo. This is a skater who has held it down for street skating for over 18 years, 16 of which he has been pro. His first video part in Anti-Hero’s Yellow Cat shows a young buck mixing street and transition with boneless fingerflips and kickflip backside grabs. For the younger dudes, you’ll probably remember him from his Vans pro models and TNT’s dyed blonde hair from the recent Girl/Anti-Hero Beauty and the Beast Tour edits. But without a doubt, from looking at his list of sponsors, you can tell Tony’s backed by companies who are down for rough and raw skating: Anti-Hero, Vans, Spitfire, Independent, and Fourstar. Not to mention, he’s got a SOTY award under his belt. So it’s no wonder that Vans has decided to bless him with a new model, the TNT SG. Boasting boardfeel and control, Vans has packed technical elements in this model to ensure that TNT’s style of skating is well supported in this model. We at Weartested laced these up and put it to the test.

The Vans TNT SG fits a bit bigger than usual. We recommend going a half size down for skating.

At first glance, this model resembles the Vans Old Skool very much with its detailed stitching. However, after inspecting and skating it, it can be safely said that the TNT SG is more durable. Like the Old Skool, the TNT SG is stitched up into three main parts: The forefoot and the midfoot, which are both made of suede leather, and the posterior area, which is made of canvas. The forefoot to midfoot area, where kickflips often make the most damage to, has a larger surface area and is triple stitched. This proved extremely beneficial in preventing the dreaded kickflip hole on the edge of the shoe, which didn’t appear during or after the 10 hour test. Another plus of the shoe was the stitching of the Vans leather logo. 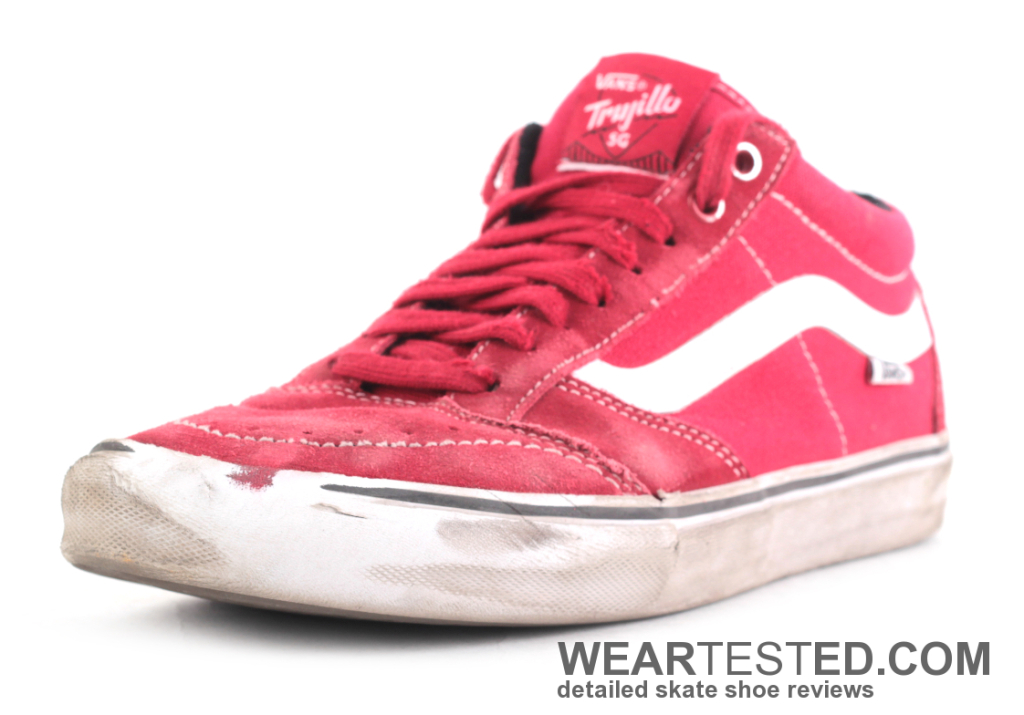 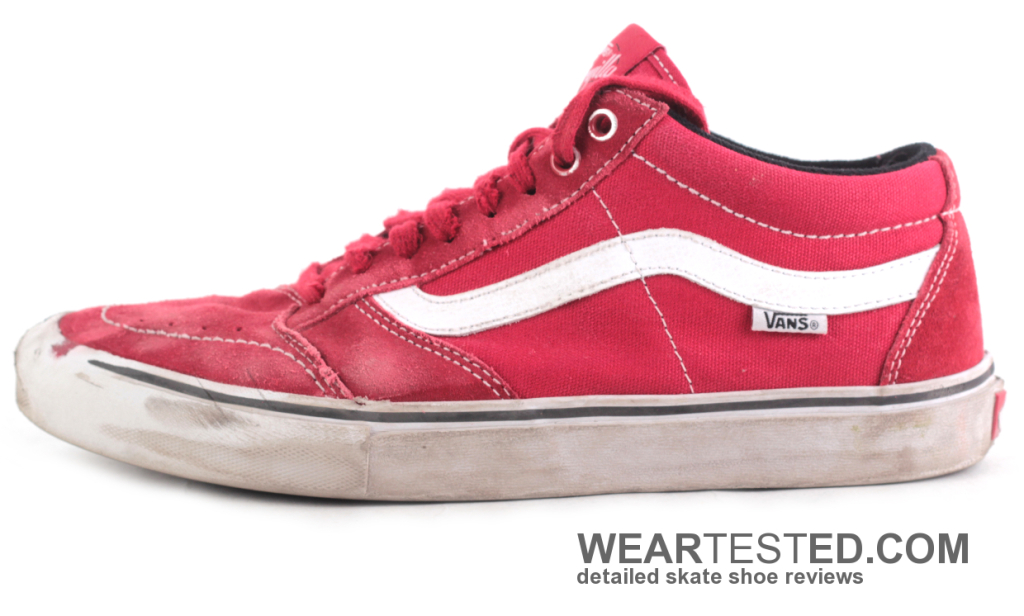 Cushioning for the Vans TNT SG was quite average. This model does feature an Ortholite Sockliner aimed to enhance cushioning capabilities of the shoe as minimally as possible. But in the end, The TNT SG is a vulcanized model, which just can’t beat cupsole cushioning. Upon first skating the shoe, the insole is extremely hard and stiff. However, after a few hours, the insole broke in and the Ortholite Sockliner began to show its usefulness. Cushioning was the weakest in the forefoot, but this may have to do with more wear in the sole where the forefoot spends more time in plantar flexion during pushing and molds the waffle cup sole to the insole more tightly, minimizing cushioning overall. 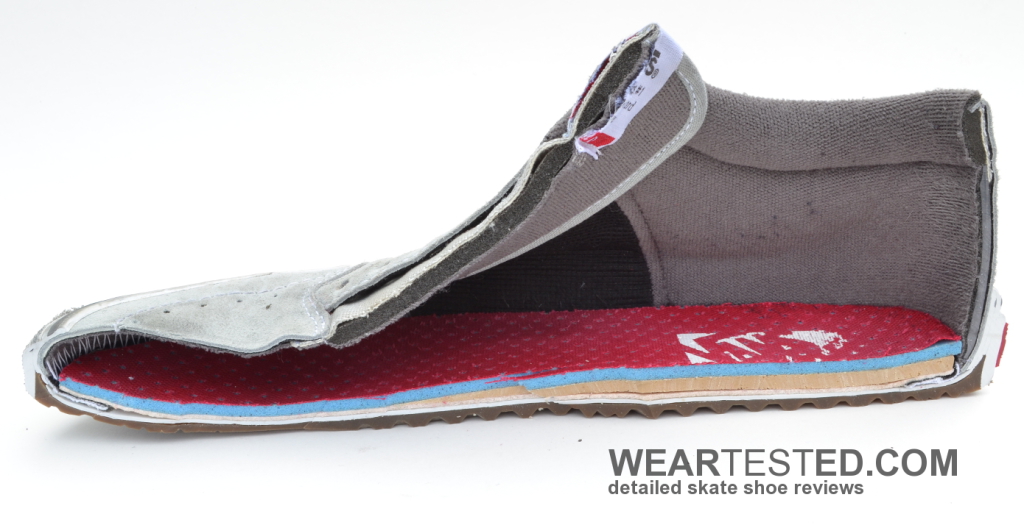 The shape of the shoe is similar to a mid-top, but with a lower top-line collar. If laced to the top, the shoe almost fits in snug like some kind of skate boot. The rear foot area where the heel fits is slimmer, and it widens much more around the midfoot, before tapering off into a rounded edge in the front foot area. The slim heel area is a very snug fit for skaters who prefer a more secure heel.

This is where Vans has proclaimed their shoe shines the brightest, and to be honest, this shoe can definitely back that claim. There are three elements of Vans’ technical features that are working together to create amazing board feel and grip. The first is Van’s gum rubber waffle outsole, providing more than enough grip, and is the perfect thickness for maximal flex and boardfeel. The second feature is Vans’ Pro Vulc construction, which is just a thicker, beefed up, and ready for abrasive contact vulcanized outer. The third feature is the aforementioned Ortholite Sockliner, which isn’t the best for cushioning and impact absorption, but instead packs a punch when it comes to boardfeel. The sole was thin enough to feel direct concave contact of the board when setting up for tricks. All three of these elements play their part in showcasing amazing boardfeel and grip, which Vans is notorious for. The suede upper also did not tear open during the 10 hours of skating, despite the vulc wearing all the way down.

The shoe lacks a technical element to ensure airflow and breathability for the skater. For those who get sweaty feet during skating, this is an element that is quite important when designing a shoe. The toe box is lined with 10 tiny holes that may help a bit with breathability, but in the end, there were sweat stains in the suede from sweaty hot-boxed feet. Moreover, the shoe is initially very stiff right out of the box. But once it is broken in, the shoe excels at providing the skater with maximum flex while still retaining a supportive and stable shape. A positive characteristic of the shoe was the added heel support in the rear section of the shoe, made of suede that helped maintain a supportive and stable shape during skating. Moreover, the canvas rear foot area retained its shape through grinds, slams, stress flex and pushing. The Ortho-Lite Sockliner provided a deep and secure fit for the heel when skating, no slipping out occurred when skating stairs.

The sixth installment of TNT’s line-up from Vans doesn’t fall short when it comes to boardfeel and grip. It’s a great shoe to skate flatground, transitions and ledges, but not so much for jumping down big gaps and stair sets. With that said, cushioning and breathability could be improved for the next model.

Check out the Vans TNT SG at ARROW&BEAST