It’s safe to say Tiago Lemos has cemented himself as one of the greatest today in terms of pop, style and footage production. Anytime we can get a clip of Tiago, it’s a treat. Whether it may be through his fit, or his selection of tricks, Tiago’s skating brings a taste of nostalgia that’s been remixed for the present day. And it works beautifully. His first signature shoe with NB Numeric, the 1010, dropped roughly two years ago, and it was one hell of a high performance skate shoe. Since then, Tiago has continued to film, putting out insane instagram clips of his “throwaway”, and saving the even more incredible bangers for his part in the full length Primitive Video “Define”, which dropped earlier this year in June. Shortly after, NB Numeric followed up with a series of short videos promoting his second signature shoe model, the NB Numeric 808. The videos featured Tiago shredding in San Francisco, Oslo and New York, edited beautifully by Kyle Camarillo, atop a Masta Ace beat with pounding 808 kick drums. Simple, clean and detailed; the videos released set the stage for the introduction of the NB Numeric 808, and we were hooked. Read on below to see how Tiago’s second signature shoe performed during our weartest. 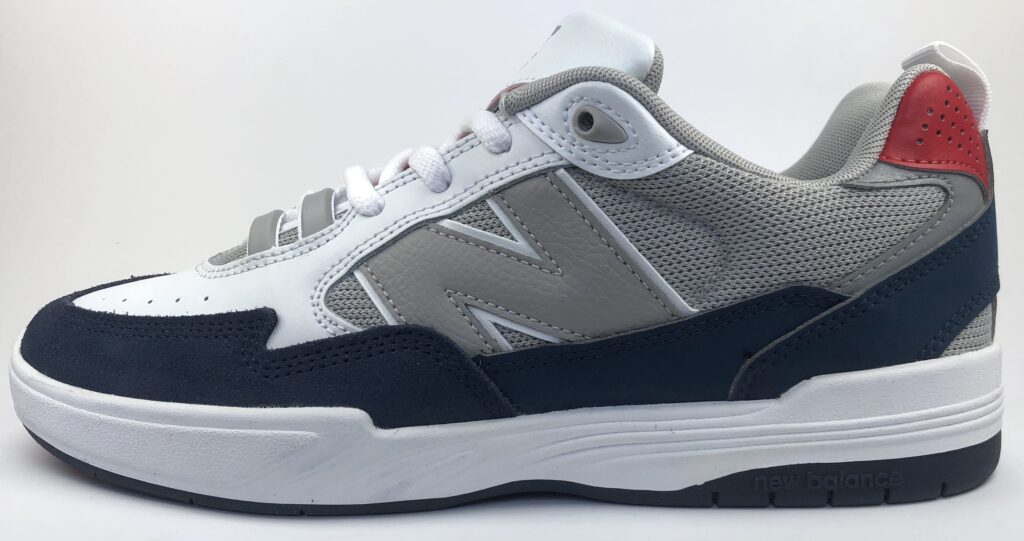 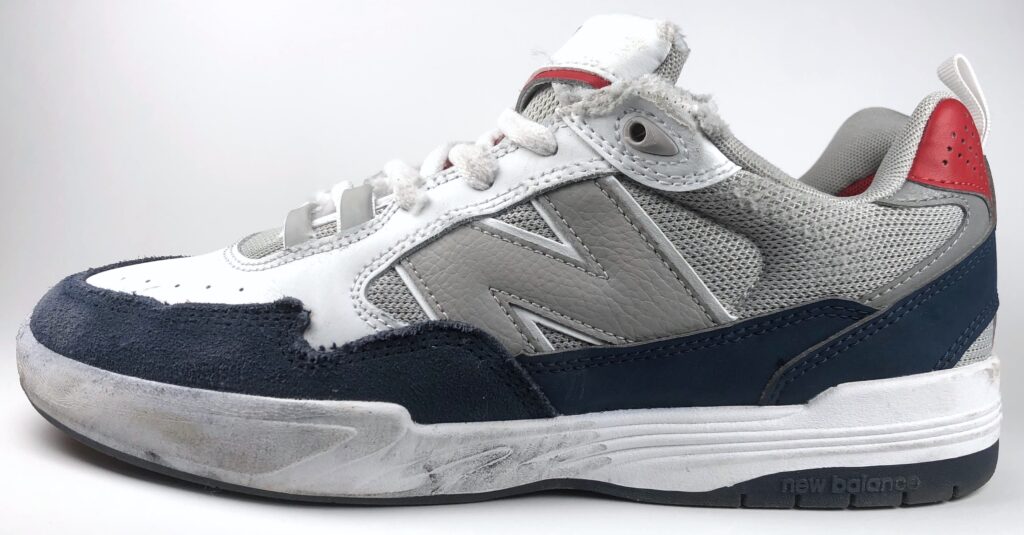 For the Tiago 808, NB Numeric took the sole construction from Tiago’s first shoe, the 1010 model, and simplified it. The 808 outsole can be described as a “cup” that holds the main cushioning element, the orange foam piece, in place. The foam piece is visible on the sole though a small window. NB Numeric calls this the ABZORB midsole which absorbs impact through a combination of cushioning and compression resistance. The key word in that sentence is compression resistance. Compression resistance within the shoe is quite noticeable since the foam piece is actually very hard. The advantage of this is that the foam can cushion tough landings without compressing completely and whittling down. In our wear test, it was definitely noticeable to have a very secure and good cushioning feeling which felt bit harder than usual.

By just looking at the outward appearance, the Tiago 808 reminds you of the classic skate shoes from the 90s. The shape of the shoe itself runs parallel from the midfoot section and tapers from the toe to a pointy end. The heel area is rather wide and a solid padded tongue makes the shoe look a bulky from the side but looking down from the top, it is rather slim. So it doesn’t feel bulky when worn and skated. As aforementioned, the upper layer construction reinforced the upper of the shoe, which helped maintain the rigidity of the shoe’s shape, and prevented the upper from sinking inwards.

The boardfeel of the Tiago 808 took some time getting used to, especially breaking in the stable sole and upper construction. After a few sessions, the sole and midsole of the shoe broke more in and the boardfeel enhanced. Even though the material layers in the forefoot were reduced in thickness, the sole is still thick and rather stiff which is the  reason why the boardfeel is average.

In terms of the sole, it features a wide and deep thread pattern which typically results in good grip. However, the stable midsole reduced the ability of the sole to sink into the griptape which made the grip also perform average.

An absolute highlight of the shoe is the shoe’s comfort and stability. The shoe itself is rather on the heavy side but it excels with a snug fit, with a few different factors working together. The foam element in the heel area and the tongue stabilize the ankle and heel into a deep pocket. This contributes to the great fit of the shoe. The tongue is held in place by two flexible straps that work to stabilize the superior surface of the feet. The upper’s sidewalls, tongue and heel area feature a well thought out combination of materials; suede was used in the forefoot for flick, while leather, mesh and a heel stiffening element were used in other parts of the upper construction to form a very stable and durable shoe.

Often times, good stability of a shoe is overlooked and not really focused on, but when it came to the Tiago 808, it was an excellent surprise. It is incredible how the stability of a shoe can affect the skate shoe’s longevity. The 808 is definitely a model which after our 10 hour wear test had very minimal changes in terms of stability and durability, with plenty of sessions left to spare. 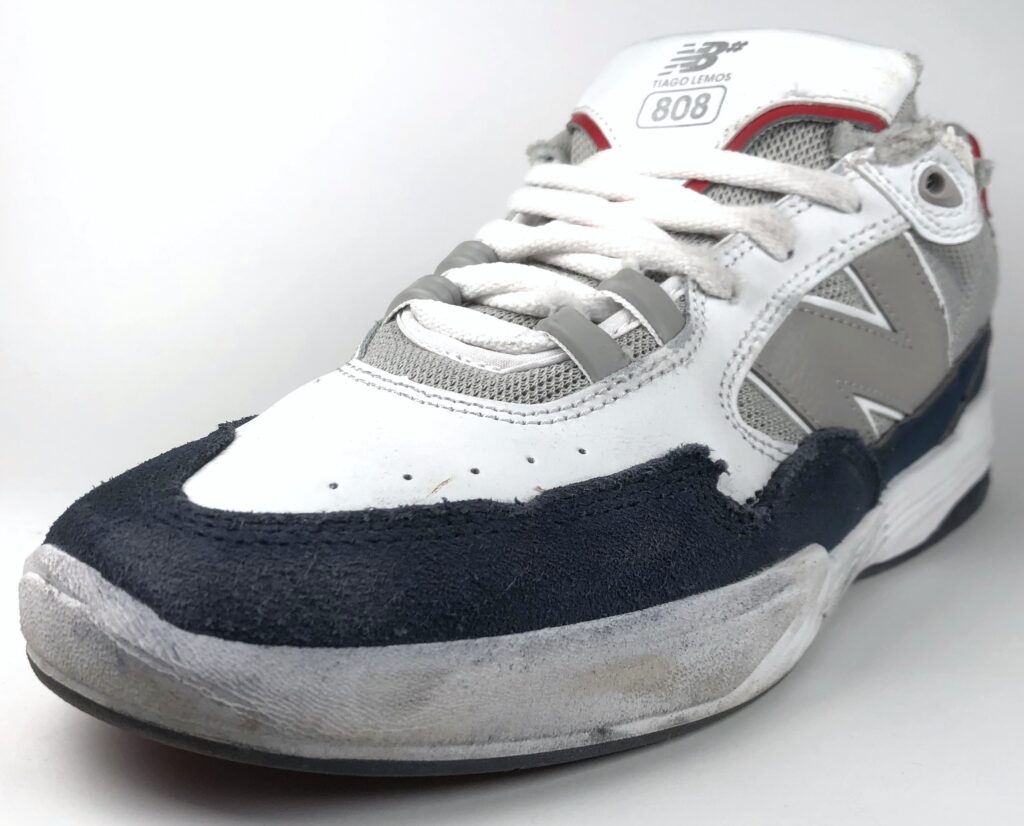 The NB# Tiago 808 is new model that was designed for cushioning protection and durability in mind, which were characteristics that were able to shine due to the shoe’s superior stability. With that said, the boardfeel and grip do pay the price, but Tiago’s second signature shoe on NB# is definitely a hit for us.