There aren’t many shoe brands in the scene who can boast about having a product made for skateboarding thirty years ago, making very few tweaks along the way and having it still widely adopted by skateboarders today. And then there’s Vans. A company with skateboarding at its core, and a product portfolio of skateboarding’s most iconic and classic silhouettes. Designed with skateboarding in mind, Vans’ products have always been reliable in withstanding the wear and tear skating brings, and certain designs have become a reflection of the level of skateboarding during a specific era. When it comes to the Half-Cab model, the shoe is based on its predecessor, the Vans Caballero, and redesigned based out of necessity as street skating took over in the 90’s, and high top shoes weren’t as popular with vert skating taking a step back. Thus, the original Half-Cab shoe was released in 1992, a time where baggy pants, small wheels and street legends were born. It’s funny how thirty years later, the same styles from the 90’s have circled back to today, and even more fitting is how this year marks thirty years of the timeless Half-Cab shoe in skateboarding. Vans has collaborated with countless brands, skate shops and skaters this year to bring new colorways of the Half-Cab and celebrate their anniversary around the world. We got our hands on a pair of the Skate Half-Cab ’92’s, and put them to the test to see how an effortlessly designed classic model fared during our test, in a time where technical full feature designs are dominating the market. 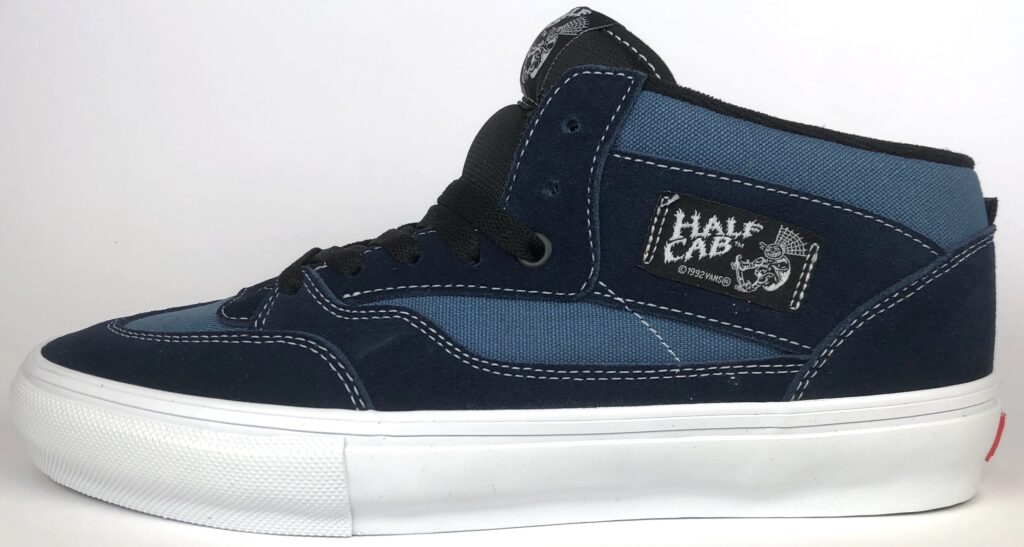 The Vans Half Cab fits true to size.

The sole and upper construction are the two main elements of a skate shoe’s durability. Starting with the sole construction of the Half Cab, most noticeable element is the very thick and high foxing tape, which is actually a two-part foxing tape. This is key to achieve a good durability since it protects the upper material from griptape contact. In our test, the upper in the forefoot area is almost untouched due to the foxing tape’s design. Since this is the element with the most griptape contact, the side of sole showed most wear in the kickflip-area.

Now let’s talk about the upper construction of the Half-Cab. Despite a lot of stitching in the critical forefoot and midfoot areas, the sole helps protect the upper to the point where there was very minimal wear visible. The upper also kept its individual panels together structurally. Vans also used their established Duracap technology, which is a rubber layer of reinforcement below the suede that protects and prolongs the shoe’s durability. Areas on the upper that showed signs of wear include the heel area and the tongue, however they were more of aesthetic flaws. The tongue itself had quite some padding, so it stuck out a lot and came in contact with the grip, which wore it down and made it looked more used than it was. Same as for the Half Cab label.

With that said, all in all, the durability of the Half Cab was exceptional. 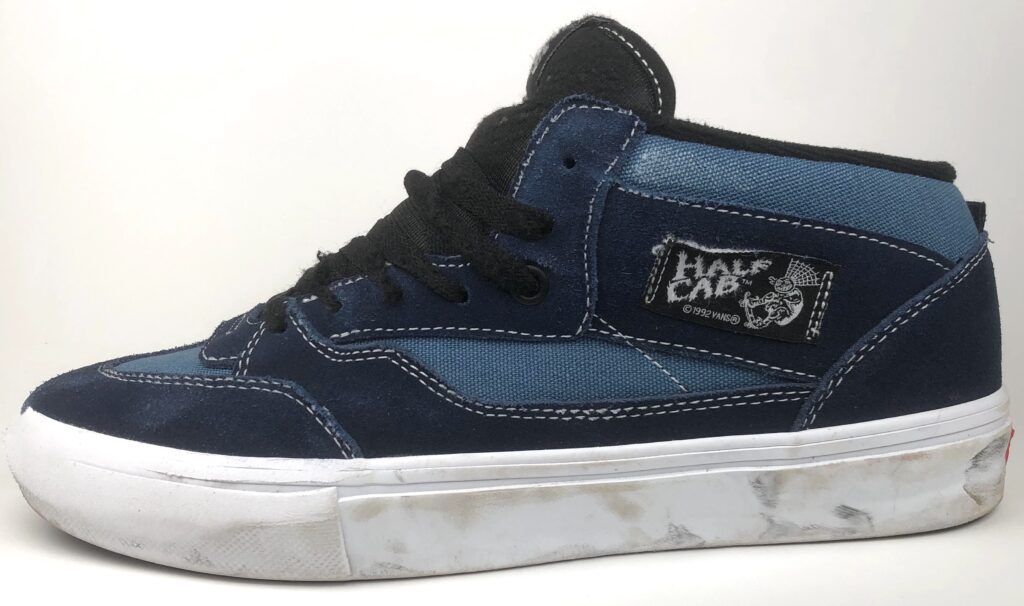 When it comes to cushioning, the Vans Skate line typically uses one of their many cushioning technologies. With the Vans Half Cab, the designers decided for the Pop Cush midsole construction. The sole is very thin, as usual for vulcanized construction, and the PopCush is a thick insole foam. In our wear test, the shoe kept the flexibility of the sole high, while providing an above average cushioning feeling.

The Half Cab has a slim pattern in the forefoot and midfoot area and gets wide in the heel area. The mid-top height sits right on the ankle creating contact between shoe and ankle. The heel and tongue padding make these areas slightly bulky but do taper off and end in a sleeker and thinner toe area. The midfoot area goes almost parallel towards the toe area and ends up in a rather pointed end.

There are high expectations when it comes to boardfeel and grip for Vans shoes. As mentioned, the sole itself is very thin, and in combination with the wide sole thread pattern, the shoe is actually very flexible. The Half Cab takes one to two sessions to break in, before providing the full capacity of the boardfeel. Once the full flexibility is given, the sole adapts well to the concave of the board and increases the surface area of the sole touching the griptape.

Vans uses a new rubber compound called SickStick. It is a gum rubber compound calibrated to improve grip and durability. During the first two sessions, the grip felt too grippy and direct. It was even hard to adjust the foot in position for flip tricks, especially in combination with the breaking in-period where the shoe felt stiff on top. Over the period of our 10 hour wear test, the shoe got more flexible and also the grip developed in a more positive way. Thus, overall the boardfeel and grip were very good but it does need some time to develop its full swing.

The Half Cab has ups and downs regarding the comfort. The padding and multiple material layers resulted in the foot area storing a lot of heat. Also, the shoe is heavy. The mid-top cut goes right over the ankles. Fortunately, and also due to the good amount of padding, no blisters developed but the shape is quite a risky cut for some feet. On the positive side, the padding does help the make your feet fit well to the shoe without having pressure points. Also, Vans added a lock-in tongue which include straps that can keep the tongue in place.

Stability is definitely a strength of the Half Cab. As you can see in the cross-section picture, the feet sit low in the shoe and are surrounded by the high foxing tape of the sole. This created a very secure and safe feeling while reviewing the shoe. The multiple layer construction in the forefoot and midfoot are quite stiff. As mentioned, they needed some time to get break-in but kept their structural strength constant. The mid-top cut keeps the feet in place and in that area, Vans also added in an additional heel stiffening layer. Overall, the stability is excellent. 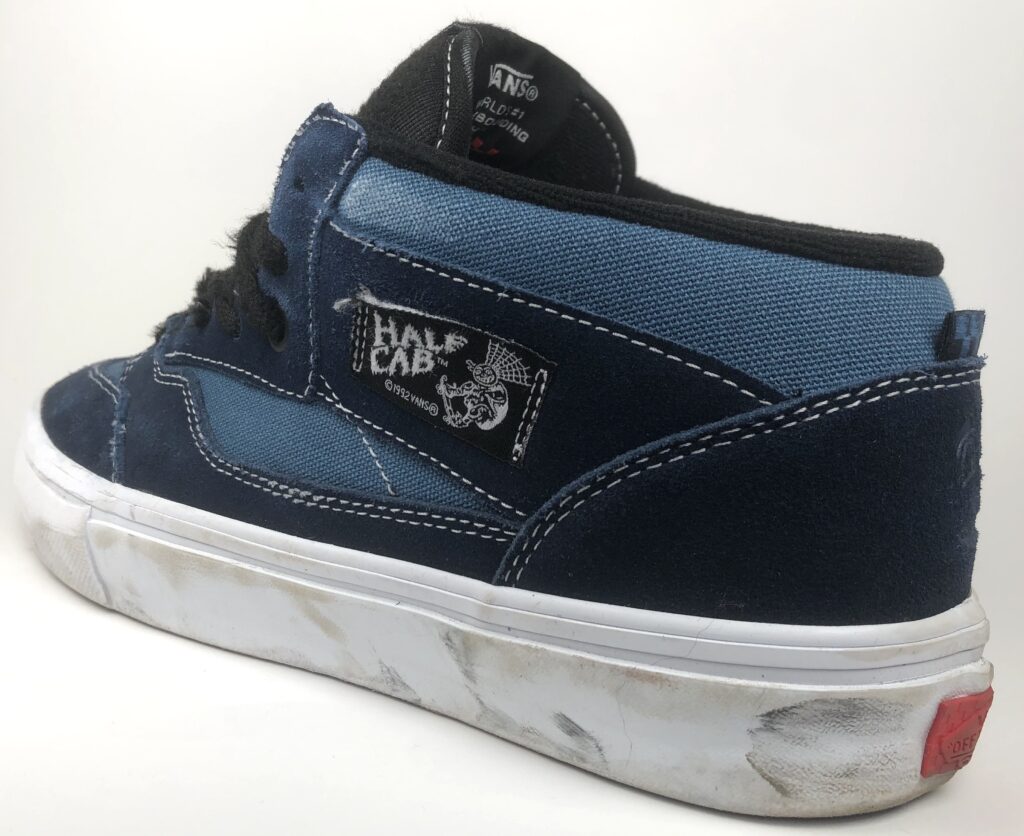 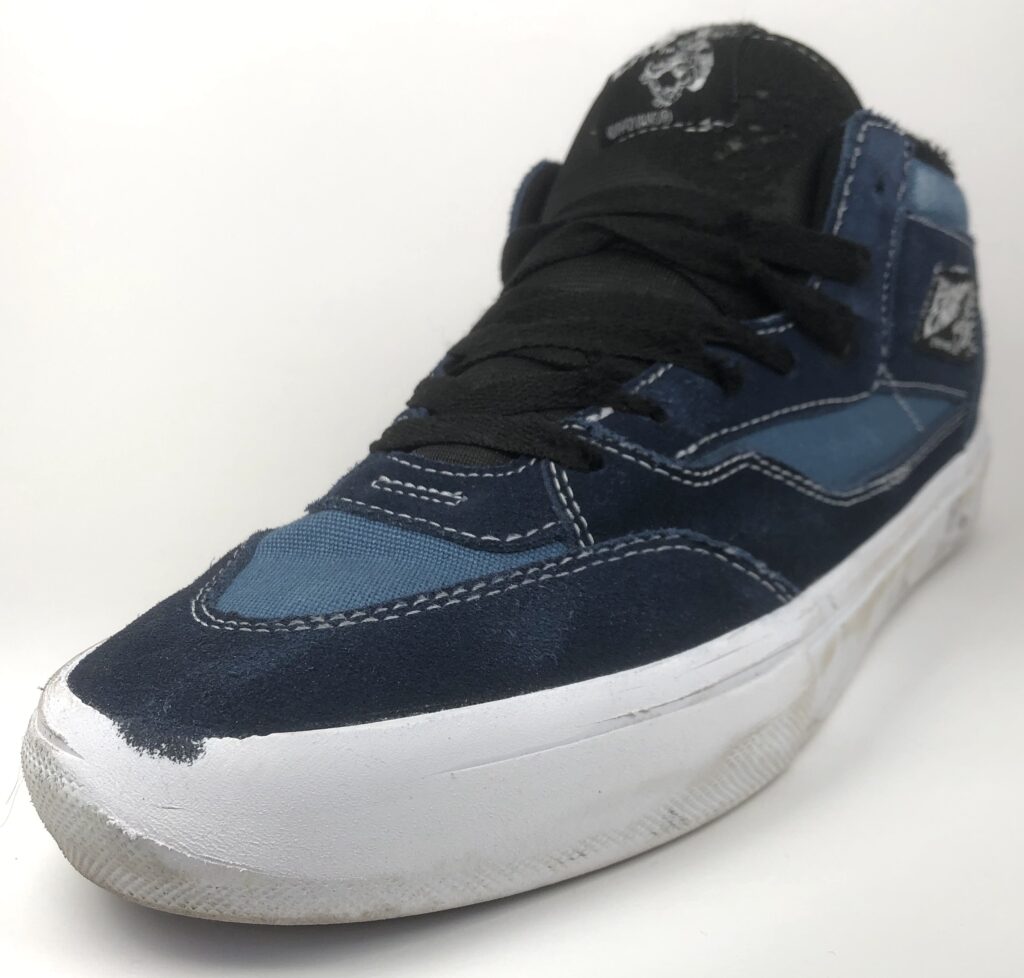 Even after 30 years, the Half Cab is never out of style and the updated version has exceeded our expectations when it comes to durability, boardfeel and stability. The grip of the shoe is very strong, and needs some time to break in, and there are some points of comfort that could be improved, but overall, the Half-Cab is a timeless shoe designed for pure skateboarding.