It’s been more than two years since we’ve written and tested Tiago’s first pro model shoe from DC. Since then, Tiago’s continued his rampage, dropping video parts, constantly impressing everyone with IG video clips and leaving DC to enter the heavy roster on New Balance Numeric. Not to mention, Tiago’s been a consistent footy machine with numerous parts and clips filmed for Primitive, Crupie, Dime and Parade. Just last year in November, Tiago posted on his IG that he was leaving DC, a move that definitely shocked us as we thought he was the perfect fit for the brand. Yet only three weeks after his announcement, Tiago posted a photo announcing his addition to the New Balance Numeric team, joining the likes of PJ Ladd, Levi Brown, Jamie Foy, Chris Colbourn and Tyler Surrey. With no time to waste, it seemed like New Balance had the plan to release his signature shoe immediately, and the internal design team go to work with Tiago to create a technical high performance skate shoe that fit the style of skating. The “Trust Tiago” teaser for the New Balance Numeric 1010 was the perfect momentum to release the highly anticipated model; after watching it we knew we had to get our hands on a pair to test out all the technical details. Read on below to see how the shoe performed during our 10 hour test.

The New Balance Numeric 1010 runs a half size bigger; we recommend going a half size smaller than what you usually wear.

The durability of a skate shoe can be broken down to several areas, the forefoot and midfoot section, the sole and the heel.

The forefoot of the Tiago 1010 features a suede piece in a typical New Balance shape. This is the main element of durability in the forefoot since it is usually the area that is open to wear and New Balance also added an underlying fused protection layer to enhance the durability. The suede piece is triple stitched to a mesh piece that covers the top of the forefoot area. These elements when combined, result in an overall good forefoot durability. The stitching did partially rip, however due to the thick suede and the additional protective layer, the shoe still held up well. The midfoot section features multiple layers that overlap and are pieced together through more additional stitching. This posed as a could be a weak spot, but the Tiago 1010 showed basically no wear resulting in a very good midfoot durability. The side of the sole in the toe area, which is also usually a critical spot for griptape, proved to be durable and signs of wear only appeared after the 10 hour test.  The bottom of the sole showed no sign of wear. The collar was the area which showed most signs of wear resulting in more of a visual issue rather than a performance issue. Overall the  durability of the Tiago 1010 is good. 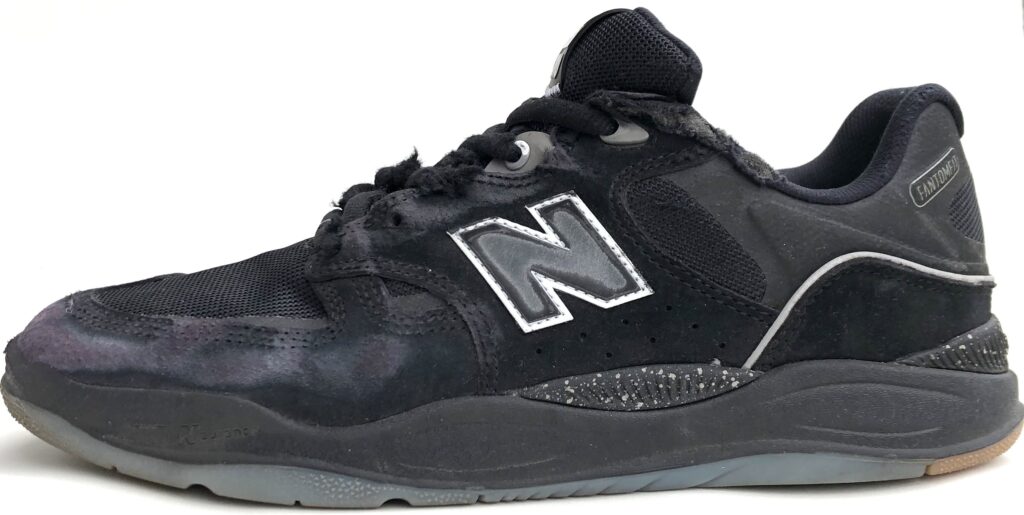 The cupsole of the 1010 has three prominent New Balance cushioning technologies, which include the NDURANCE outsole, FUELCELL foam inlays and an ORTHOLITE insole.  The outsole can be described as the cup which holds all these cushioning elements together to create an excellent cushioning effect. There are two FUELCELL EVA foam pieces. One is stretching over the whole midsole and is visible in the lateral and heel area which creates a nice soft feeling for the feet. The second element is thicker and placed in the heel area, meant for improving cushioning and protecting the heel. This element is also visible through a hole in the bottom of the sole. The sockliner actually has the least contribution to the cushion, however, it is significant in providing an additional layer for comfort. In summary, the New Balance design team and Tiago emphasized a lot on the sole construction resulting in a very good cushioning effect in the heel and midfoot section. The toe area only features a thin layer of the EVA foam in order to maintain boardfeel and flexibility.

Regarding the boardfeel, the Tiago 1010 can be divided into two areas, a thick and stable heel area and a thin and flexible toe area. The boardfeel of the New Balance 1010 took some time getting used to and to really break through the transition between the two areas. However, after a few sessions, the sole and midsole of the shoe broke in and the boardfeel greatly enhanced. The outsole has an interesting shape. In the lateral toe area, basically where the big toe sits, the sole has lots of groves for flexibility so the sole is really in contact with the board. The outsole of the toe area, where your pinky toe sits, is almost flat and helps increase the stability. A similar flat rubber pattern is located around the medial area and is stretched to the heel. It contributed greatly to a safe and secure feeling. All in all, New Balance made sure that the areas where grip is needed is present, and areas which don’t directly affect the grip is more stable.

Another highlight of the shoe was the shoe’s stability. The shoe itself is a snug fit, with a few different factors working together to ensure a tight and compacted fit for the feet. New Balance calls it FANTOMFIT which are two foam packages inside in the heel area. These foam elements stabilize the ankle and heel into a deep pocket, and contributes to the excellent fit of the shoe. The tongue is held in place by two flexible straps that work to stabilize the superior surface of the feet. The sidewalls, tongue and toe have exposed mesh pieces which help to make the shoe more breathable. Usually mesh makes a shoe unstable but the upper and especially the heel contraction made the feet completely stabilized within the shoe, which eliminated slippage and helped with the consistency of flick tricks. During the whole weartest, breathability was good which made the shoes quite comfortable to wear. Often times, good stability of a shoe is overlooked and not really focused on, but when it came to the Tiago 1010, it was an excellent surprise. 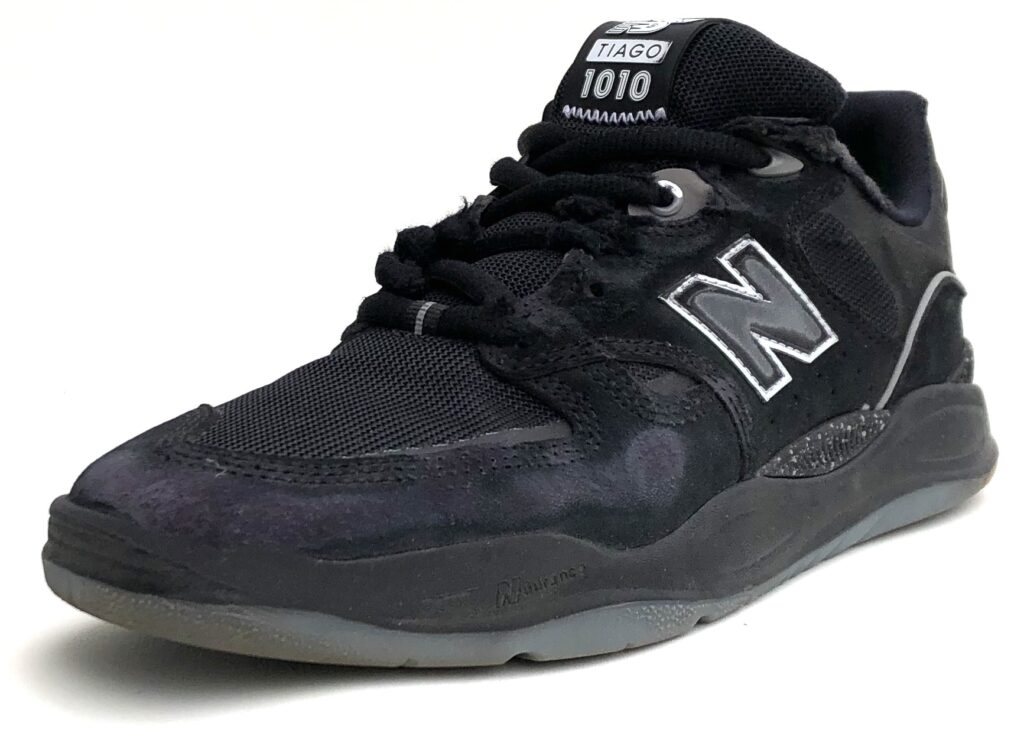 The New Balance Tiago 1010 is a high performance skate shoes that excels in cushioning, comfort and stability, but the shape will take getting used to and more attention to technical elements to enhance the durability of the shoe could help.