Skateboarding is constantly developing, not only due to its creative community’s drive but also due to external influences. In the 90s and early 2000s skateboard products were almost exclusively available in core skate shops. With the rise of e-commerce and brands constantly looking into expanding their sales channels outside of core skate shops, the concept of a core skate shop became rarer. However, they will always be part of the skateboard community because they can offer what no one else can, authenticity and support for the local scene. Neil Chester and Craig Smith saw core shops struggling over the years fighting almost a David vs. Goliath fight. Thus, they took a chance and started Parade. The concept is basically a common platform showing the best of it, to support skateboarders, stores, brands and creatives from the community. Parade is a curated destination that brings them all together online, promoting the culture and helping skateboarding thrive in today’s rapid environment. Parade is a new and quite different concept, so they promote newer ways of sharing. You can the the result below, since they were so kind sharing with us their content and pictures for their adidas 3ST.004 introduction.
s
“With the release of the adidas Skateboarding 3ST.004, Parade spoke with adidas Senior Footwear Designer Scott Johnston to learn more about the 3ST project, the inspiration, the learnings and what’s next. 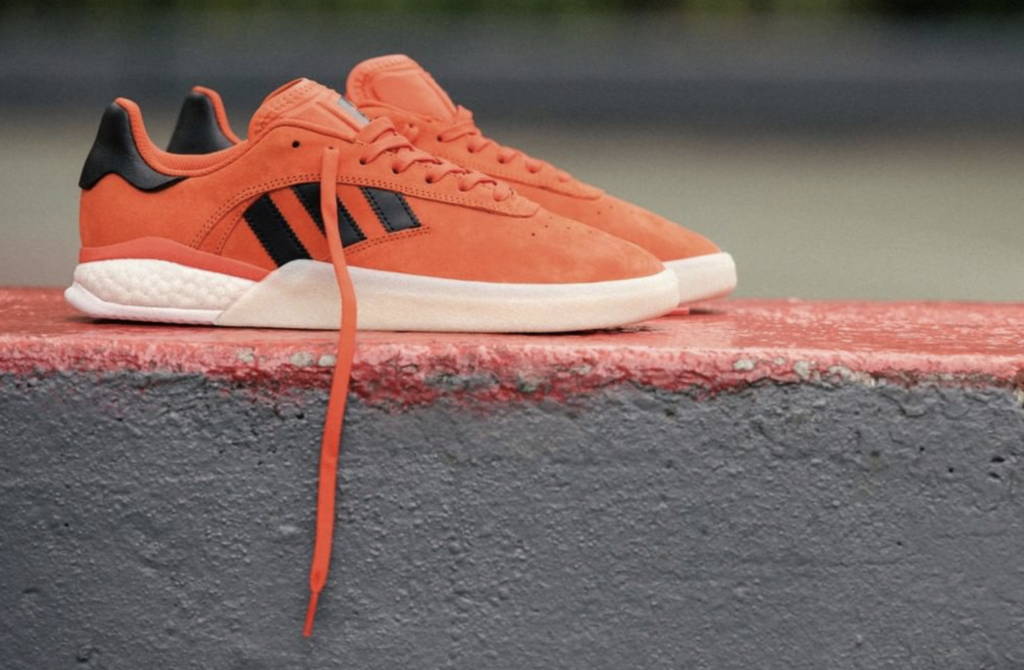 The adidas Skateboarding 3ST project was born out of a desire to push the boundaries of skate shoe design. Overly technical or innovative footwear has always been somewhat of a commercial gamble and presenting newness to skateboarders can often be a challenge. It’s a tough product and design balance that is consistent across any professional sport. If a previous product performs then why change it? All of those challenges are what adidas wanted to face head-on when embarking on the 3ST project.

adidas Senior Footwear Designer Scott Johnston initiated the 3ST workshop program. As many readers will know, Scott needs no introduction having previously been a pro skateboarder with Chocolate for many years. Needless to say, his designs demonstrate skateboarding knowledge and experience. “We set out to challenge the status quo of skate footwear, which can be pretty stagnant and 3ST is our opportunity to take risks.” 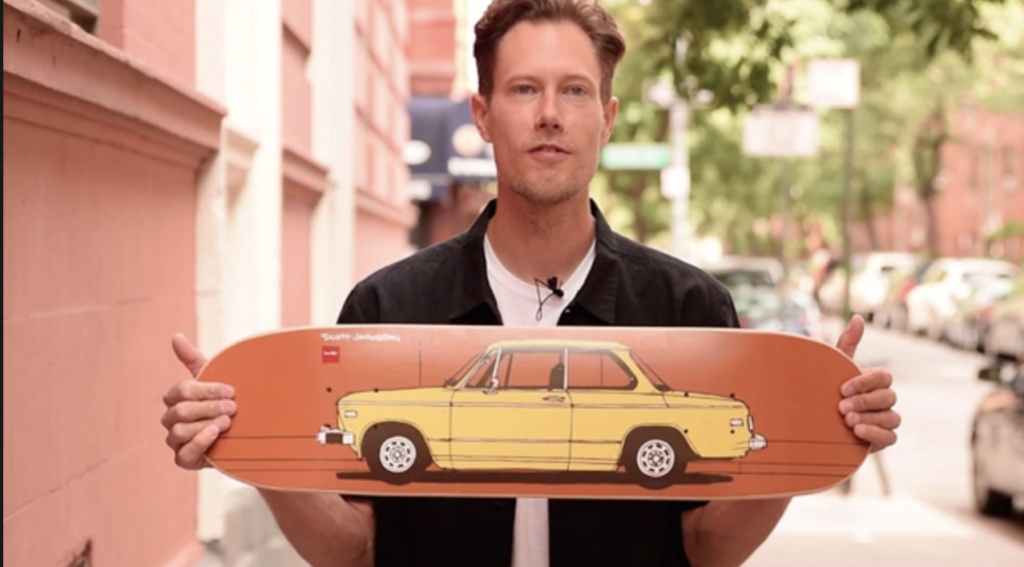 The first product launched was the 3ST.001 in Spring 2018. With invaluable team insight and testing, the first 3ST stated its intention immediately and sought to open the aperture of traditional methods. Scott continues, “When you think about skate footwear, it’s safe to say one would think Vulc. So this was our first target for 3ST, to explore how we can approach vulcanised footwear through a newer performance lens.”

The .001 was quickly adopted by the adidas team, especially by Miles Silvas and Gustav Tonnesen who both appreciated its subtle technology, support and refined board feel. Check any recent footage and you’ll see them in the .001, showcasing the products diversity through their differing skate styles. 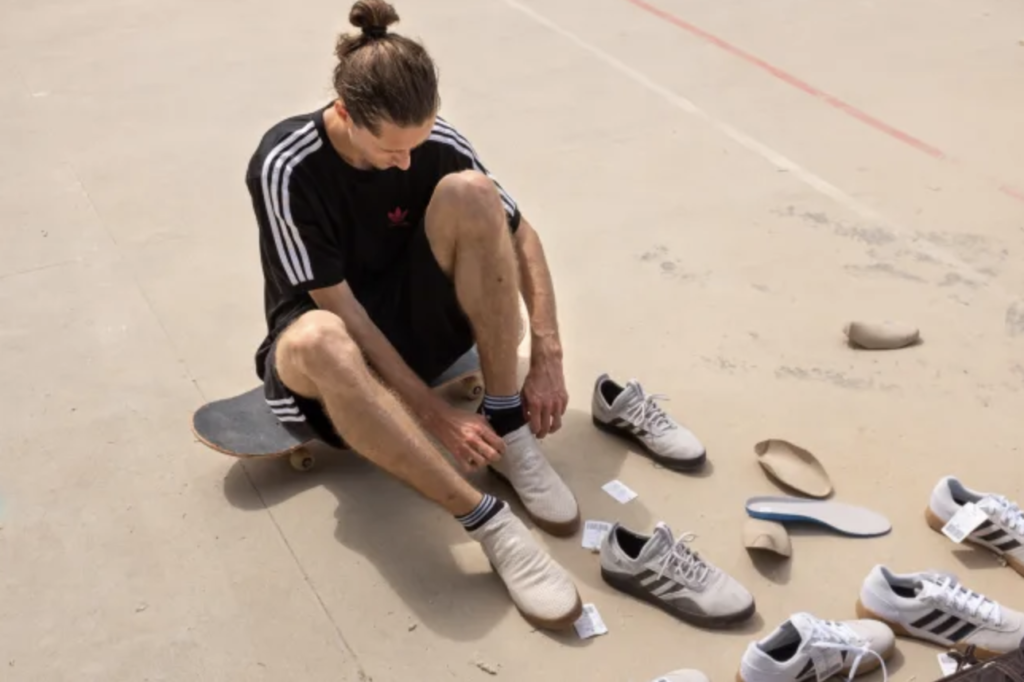 Releasing a new shoe is the litmus test for any skate shoe designer, yet alone something strikingly different. R&D gets you so far but the real indicator is how it resonates with the skateboarding public. Something Scott Johnston is acutely aware of. “Post-release is a big moment to see the comments but I really like to see how it shows up in footage and how people are wearing our product. Giving life and personality to what we created is most important. And yes, the negative comments are well heard in the efforts for improvement in the future.” 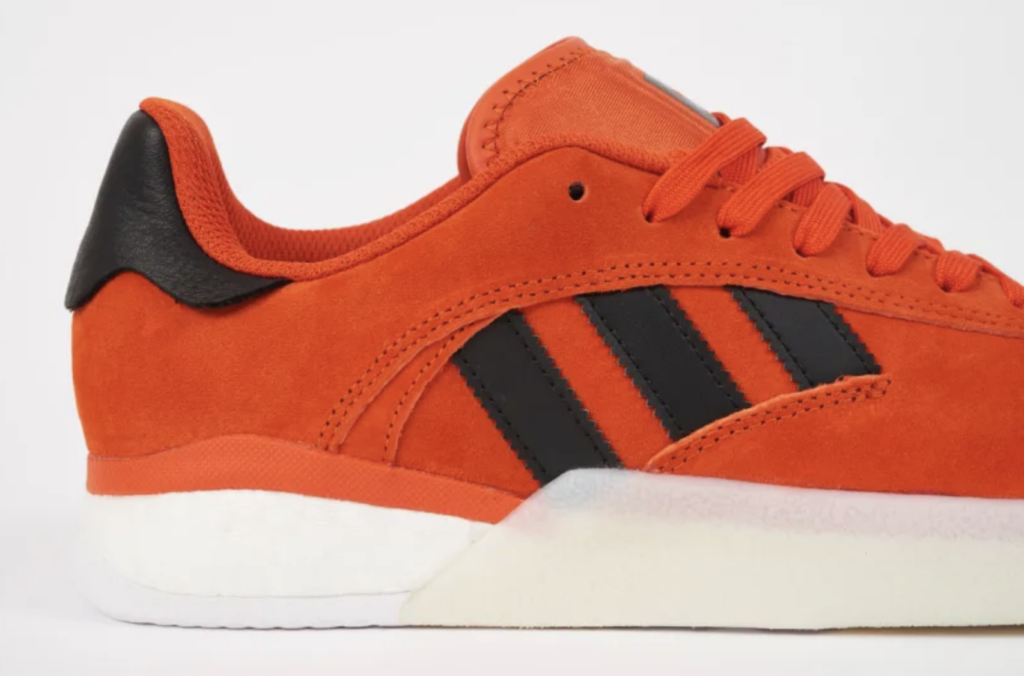 Almost simultaneously adidas released the 3ST.002, which stretched the imagination by being a laceless slip-on boot that challenged the norm of any previous skate shoe aesthetic. With skateboarders looking down at their feet in the vital last moments before popping any trick, they need supreme confidence in their footwear. Having a shoe that is also pleasing to the eye is essential to many professional skateboarders, maybe it’s mind games but it all plays a part.

adidas rider Na-Kel Smith was instantly drawn to this contrasting style of the .002. For him, it represented a lot of himself – challenge expectations and show no fear in the unknown. Looking at the subsequent release of the 3ST.003 and now the new 3ST.004 highlights just how much the .002 is a departure from the series. In a way, it was the most perfect 3ST product, pushing a design philosophy without too much concern for the commercial side. It’s something that is a delicate balance. “All skate shoes have different intentions in their design processes” adds Scott. Some shoes magically stick, such as the 10-year-old Busenitz Pro, which remains as popular as ever but this was never the primary objective of the 3ST project. It’s a serious hat-tip to adidas for running this creative and commercial risk.

Other learnings outside of design presented themselves throughout as Scott expands, “we learned to rethink what an introduction of this style of product needs to look like in the future. Maybe it’s more like seeing a concept car. You don’t quite know what it is you’re seeing.”

The latter half of the busy 2018 saw the introduction of the 3ST.003, which utilised a recurring theme. Scott continues: “This was based off soccer shoes, which is the footwear category we reference most for adidas skate shoes because the need to feel a ball or board are somewhat similar. It was for this reason the 3ST.004 combines performance indoor soccer with the style aspect of adidas Originals.” 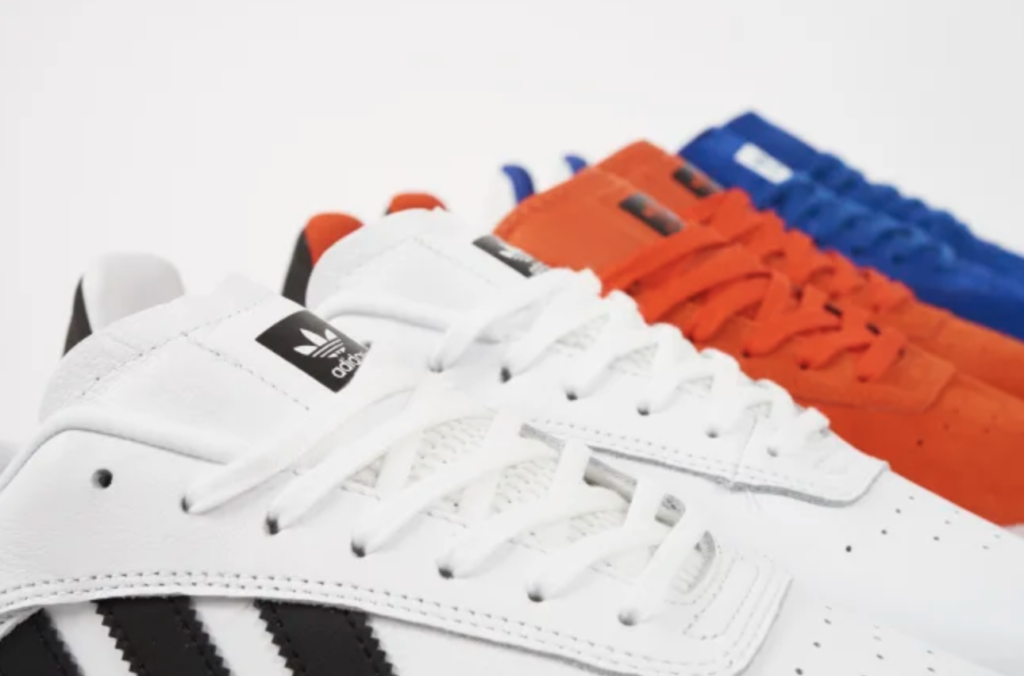 The adidas 3ST.004 is the most technical and inspired offering to date, featuring Boost technology to aid impact and comfort, it promises the most of any previous 3ST product. “I’m extremely happy with how the 3ST.004 came out. There is still so much we can do with colour and materials, I see a long life of energy and upgrades in this model alone” explains Scott. 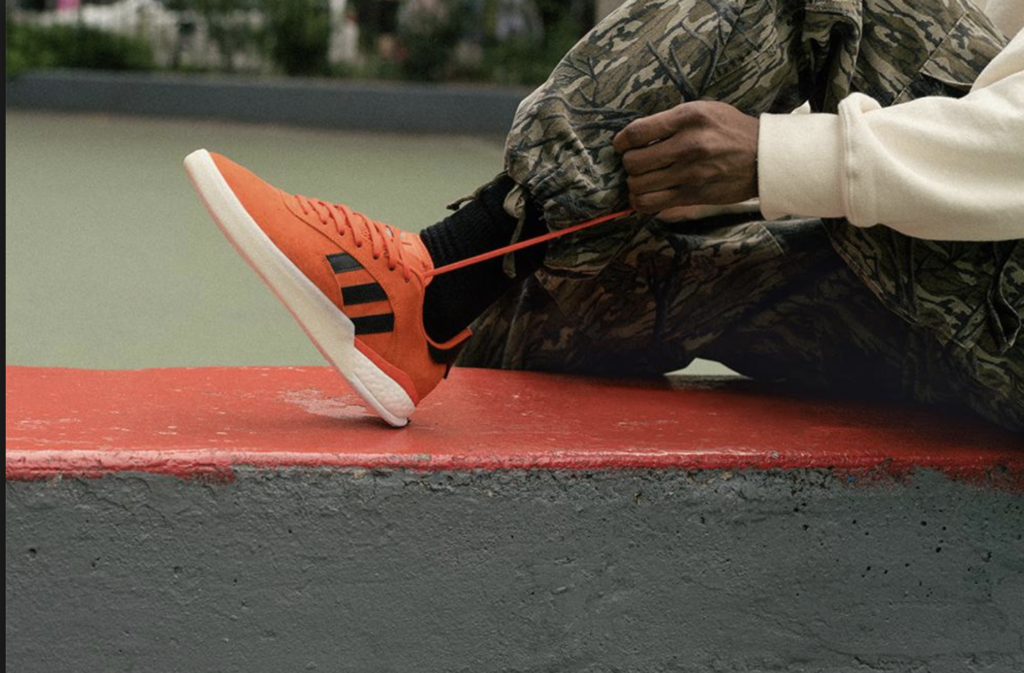 Pairing technicality with style is often considered to be the holy grail of skate shoes and this combination is not easy to achieve. Durability and resistance usually don’t mix with an underfoot feel of a simpler vulcanized or lightweight shoe. In order to achieve optimal board feel and control, a low profile sole is applied to the forefoot, while an s-curve heel lock holds in the rear. With the 3ST.004 really looking and feeling like an evolution of all the previous 3ST product, it holds a lot of promise. The .004 design direction was achieved more through process and learning rather than imagination. Hence taking only a small dose of outside inspiration from the extensive adidas archive, looking to the early 80s Kegler Super OG for is translucent grippy outsole.

While the .004 may be the finest 3ST product out of the workshop so far, it’s no final conclusion with Scott stating “a lot of new concept ideas will run through this filter, as 3ST is intended to be an open source workshop space for new ideas and concepts.”

You can shop the new 3ST.004 skate shoe and the accompanying track pant and top by searching 3ST on Parade or by visiting adidas Skateboarding in their brands section. 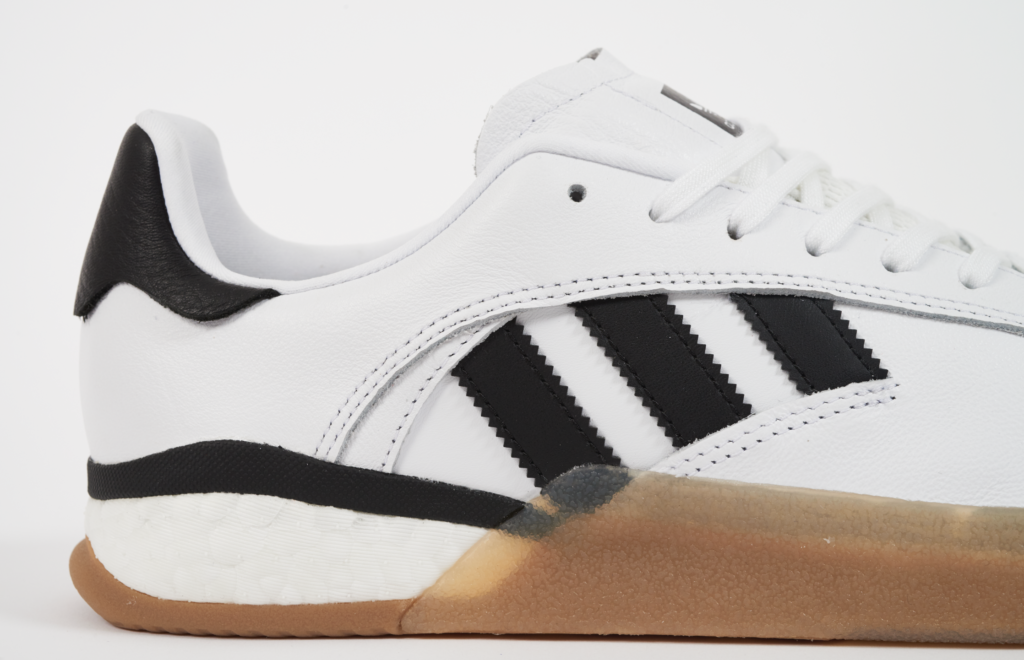 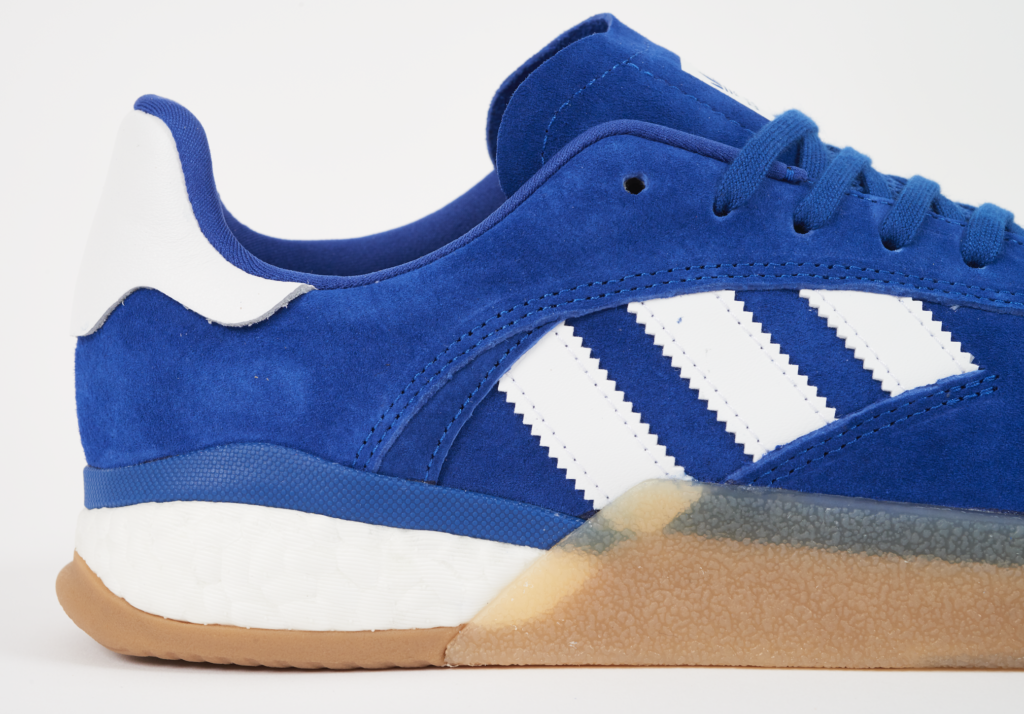 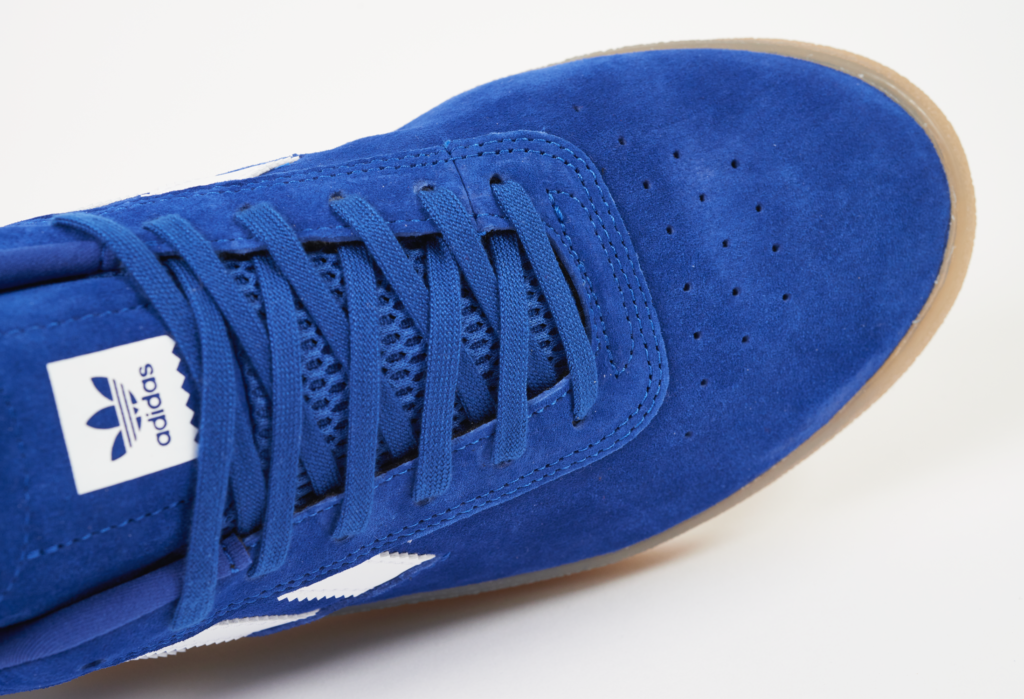