All we can say is, we can’t believe it took this long for Shane’s official pro model to finally come out. But with that statement, we’re also highlighting the fact that Shane is undoubtedly one of the best professional skateboarders out today, who has put in incredible work ethic into his skate career and is well deserved for a pro model. We’re talking about X Games and Street League contest, nollie-backside heelflipping Wallenberg, and elevating the technical ledge skating game with class. Not to mention, EVERY Shane O’Neill part has been memorable; from the soundtrack used, perfectly crafted no push lines, and insane rail, stairs, ledge bangers, Shane’s parts will go down in history as some of the most influential video parts of our generation. He’s also been going through a lot of career-defining team changes, first going pro for Skate Mental back in 2010, and then joining P-Rod’s heavy roster on Primitive Skateboarding in 2015. In 2019, it seems something ticked in his mind where he realized he could take the same creative control he has for piecing together intricate lines, and apply it to building a brand that exudes the same flawless style, with April Skateboards. All throughout this time, Shane’s only been spotted wearing Nike SB Stefan Janoskis. It might even be safe to say that he was one of the skaters that gave the Janoski it’s style and appeal back around the 2009 era. After wearing the Janoski for over a decade, Nike SB decided to give him a Pro Colorway, with higher side taping in 2017. It was a move that fans were excited about for Shane, but left some in awe that it wasn’t a new Pro model, only a colorway. Regardless, the part he put out, Nike SB „Levels“, was a testament to his drive, and reinforced his legacy in skateboarding. Now, when Shane teased his new shoe on social media, we knew we had to get our hands on a pair. If he’s been loyal to the Janoski for over 10 years, what does that mean for his new Pro model? Will there be features similar or even better? Knowing Shane’s attention to detail, we were excited to see how his input on different design features impacted the level of skating that could be endured. Read on below to see how the new Shane O’Neill performed in our weartest.

There are several factors that make a good durability on a skateboard shoe. The toe area, the midfoot area and the sole construction. The Shane has a one-pice toe cap that stretches all the way to the midfoot area. The suede in the toe area features a seamless construction and poses no threat for ripping, creating a very durable characteristic in the shoe. The upper is basically split into two pieces; a long toe-box is connected to the midfoot area, and another section that trickles into the heel element of the upper in follows. Although, the connection point seems to be at a rather critical Ollie-area, the Shane did not show any signs of ripped seams in our 10 hour test. The shoe featured a thick vulcanized sole construction in the toe-area, directing abuse away from the suede itself, and increasing the durability to help withstand all 10 hours of skating, with minimal wear. In addition, another positive feature in regards to the durability, is the lacing design, which helps shield the laces well without making the shoe’s design feature look abnormal. The only area that showed signs of wear was the heel collar. The material was destroyed quickly by the griptape, and the same goes for the top lateral part of the mesh tongue, which isn’t hidden under the laces. All in all, the durability of the Shane was excellent.

The shape of the Shane is a feature that’s well appreciated in a time where bulkier skate shoes are more common and cramped down by an overcompensation of technical design features. The shoebox shape is long, a bit slimmer, and well protected by a high taped vulcanized sole. The toe piece tapers off a bit, but rounds out well more than the toecaps of other shoes on the market. Moreover, the vulcanized construction is double layered so even when the first layer starts wears off a bit from griptape, there’s another layer underneath to maintain the structural shape of the shoe.

It’s difficult to create maximal boardfeel while upholding a high level of performance cushioning, for vulcanized shoes. The main cushioning element of the Shane is the insole, which is made from slightly thicker foam, and a Nike Zoom Air pocket in the heel of the sockliner. The cushioning was fair and not that noticeable.

As with most vulcanized models, boardfeel and grip are the highlights of the shoe. This was definitely the case with the Nike SB Shane O’Neill, which proved to have amazing grip throughout the 10 hour wear test, and had plenty of life in them for future sessions. The main technical feature of the shoe in terms of boardfeel is the thin vulcanized construction and deep groove sole pattern. Boardfeel of the shoe was great because the insole flattens out much more in the first third of the shoe and the midsole itself is fairly thin, which provided for a responsive board feel for the feet. In addition, the flexibility of the sole helps sink into the concave, creating close contact to the board and improving boardfeel and grip.

The comfort of a shoe is related to weight, fit, inner construction and breathability. The weight is average compared to other shoes, but when it comes to fit and inner construction the Shane O’Neill model creates an extremely comfortable feeling. The shoes fit very close to the feet and not stiff out of the box. The inner construction is clean and everything is held together by tongue centering straps, which secure the feet in place when it comes to flip tricks and heavy impact landings. One thing that was lacking in terms of comfort, was the absence of ventilation for hot air from the feet to escape from. After skating, those who get sweaty feet easily will find it hard to keep the shoes on for a long time since some of the sweat gets absorbed into the suede. The shoe’s stability is slightly above average. The shoe hugs the feet very well and creates a secure feeling of not slipping out even though the shoe is very low cut. However, due to it’s focus on boardfeel, the Shane O’Neill model has a minimum amount of padding and thus, the support is sacrificed. 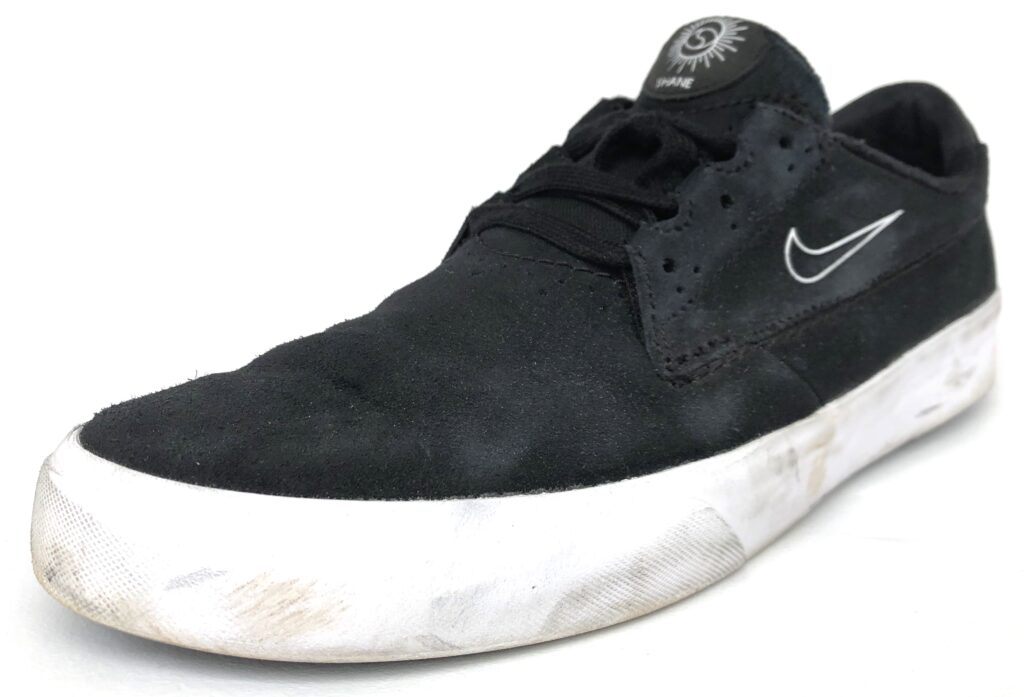 It was well worth the wait. The Shane model fulfills the expectations, also due to a similar design language as the Janoski shoe. The Shane shines when it comes to durability, boardfeel and comfort, in fact, its durability and boardfeel are benchmarks in 2020 for a skate shoe. The Shane especially has its advantage in terms of comfort over the Janoski since the shoe has a better balance of flexibility/stiffness right out of the box. Areas to improve are the stability and the cushioning, which are just a reflection of the focus on boardfeel in the shoe.