First time I was introduced to Rowan was through his old Shep Dawgs crew videos, where he blew onto the skate scene with a ponytail, funky last name, and an undeniable loose-but-in-control style of skating. Now only that, the whole crew was 100% skate rats and backed by Riley Hawk, Taylor Kirby and AJ Zavala; with Rowan as the youngest in the crew, you knew he had a lot to prove, and his technical switch game along with his ability to skate massive gaps and sets made him the all terrain skater. Since then, Rowan’s been on a rampage, letting the footage speak for itself. He’s become pro for Baker and Vans, with exceptional parts in Baker 4 and Vans Propeller, as well as features in the more recent Supreme Videos, alongside his Baker teammate Kader Sylla. As a skater who’s not always in the spotlight, it’s safe to say that Rowan’s footage speaks for himself, and when you put in the work ethic Rowan has, a Pro Model shoe from Vans only further certifies the industry’s recognition of your influence as a Pro skater. When we saw the new model, it seemed to feature a similar silhouette as most other Vans models, but when we researched a bit more, we found that the shoe features new technological improvements, and knew we had to put the shoe to the test. As an all-terrain ripper, Rowan and his input behind the key focal points oft he shoe’s design elements intrigued us to test the shoe in every way of skating possible. Read on below to see how the new Vans Rowan Pro fared in our 10-hour weartest.

The Rowan Pro has two major elements when it comes to durability, the sole and the upper. The sole is very thick in the forefoot area which not only increases the flick but also proves to be very durable. The thickness of the sole in the side area helps to protect the upper from wear. The upper elements are triple stitched which helps to keep the individual panels together structurally. With that said, even triple stitched uppers tend to rip as the suede wears down. Due to the thick sole construction and the low cut, the griptape from the board barely touches the suede upper. This was shown in our 10 hour test, in which the upper of the forefoot area shows only minor signs of wear. In addition, Vans used their established Duracap technology, which is a rubber layer of reinforcement below the suede, so even if the suede has a hole, there is an additional layer to protect and prolong durability. All in all, the durability of the Rowan was exceptional.

Typically, the Vans Pro Skate line uses Ultracush HD technology for cushioning. With the Vans Rowan Pro, they’ve introduced a new cushioning technology called PopCush. The sole is very thin, as usual for  vulcanized construction, and the PopCush is a thick insole foam. This helps keep the flexibility of the sole high while providing  foam cushioning elements. All in all, having a foam insole definitely has advantages for vulcanized soles and it is definitely proven with the Rowan Pro.

The Rowan has a slim silhouette and an almost mid-cut shape. The midfoot area goes almost parallel towards the toe area and ends up in a rather pointed end.

There are high expectations when it comes to boardfeel and grip for Vans shoes. As mentioned, the sole itself is very thin, and in combination with the wide sole thread pattern, the shoe is actually very flexible. The Rowan takes one to two sessions to break in, before providing the full capacity of the boardfeel. Once the full flexibility is given, the sole adapts well to the concave and increases the surface of the sole touching the griptape. Vans uses a new rubber compound called SickStick. Mainly focusing on increased durability, the Rowan Pro did not show too much of a difference to previous Vans models in regards to grip.

The Rowan has a very good stability but compromises on comfort. The higher cut in the heel area combined with the padding in the heel area secure the foot very well. Next to that, the midfoot and toe area have lots of layers which increase stability as well as the high taper vulcanized sole, which in turn makes the shoe very stable. A clean inner construction provides maximal comfort, however, it does compromise the breathablility of the shoe. It uses more mesh canvas material in the midsection and inner toe, and as a result, is one layer less thicker than the suede covering the outer toe and heel. This does help make it a bit more breathable, but the foot still stores a lot of heat. 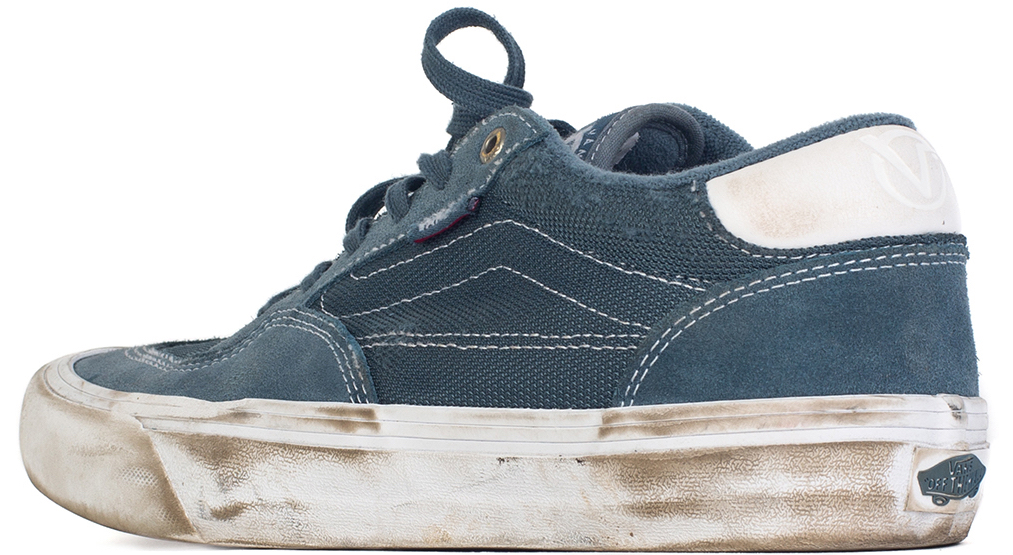 The Rowan is a solid addition to the Vans product line, as it features a clean silhouette backed by new technologies like SickStick and Popcush. The durability, cushioning and comfort were a hit, but boardfeel and grip could use a bit more attention and fine-tuning to ensure maximal performance right out the box.