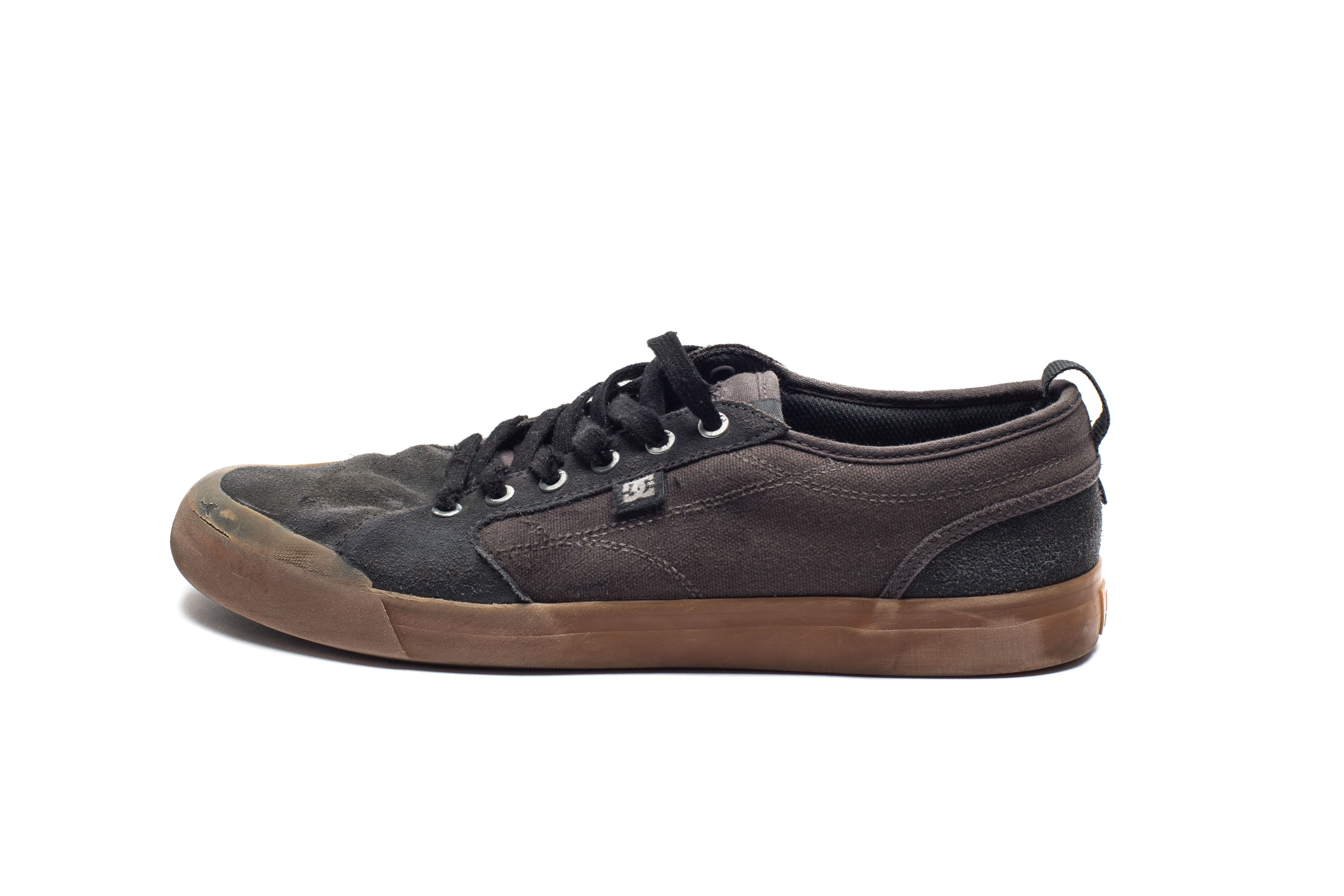 If you’ve seen any of Evan Smith’s parts you know that he’s got a very raw but finesseful approach to his skating. If you’ve read any of his interviews, or met him in person, you know that he’s the most down-to-earth, positive vibin’ free willing, hippy-esque skater to keep it real in the skate industry. In fact, he keeps it so real that during the design of his DC Evan Smith S Pro Model shoe, he had an internal conflict of using DC’s patented Super Suede because animal hides were being used and he didn’t want to be the one to benefit off the slaughtering of any animal in the controversial leather trade. At only 25 years old, Evan’s released countless of video parts that have securely established his skating in the pro ranks. But even more intriguing to the general audience is that this is a pro at 25 years of age, whose ideals and values are steadfast; he knows as a human how he wants to be interweaved into this world, he knows as a skater he wants to push the limits as far as possible, and as a DC pro, he knows how he wants his pro model to be designed. When asked about his approach to competing in Street League, he replied, “My goal is to fly as high and as far as possible and slam as hard as possible just to show them that that is part of skateboarding. If I have to get taken out by a fucking ambulance in an event in an arena then so be it. That’s why I do this.” Evan’s skating broadcasts these words loud and clear, and we here at Weartested could not pass up the opportunity to test out his new DC pro model shoe. Read on below to see if Evan’s pro model shoe successfully backs his skating. 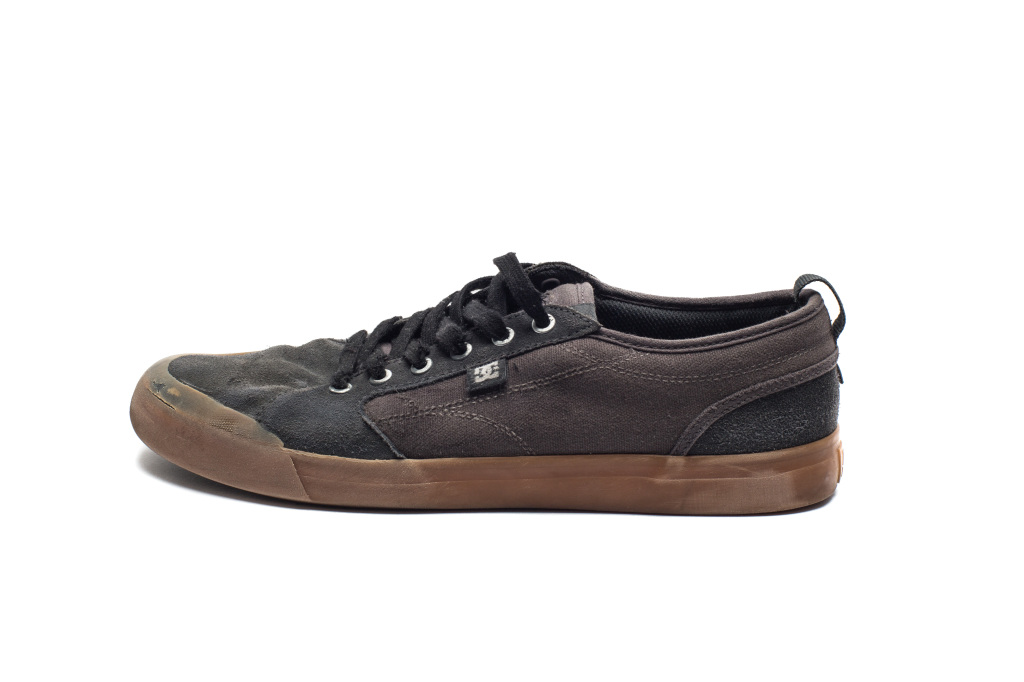 Evan Smith’s new pro model is also DC’s rendition of their first rubber toe-cap model to enter the product line. As we know, the durability with rubber toe caps is exceptional and this past year companies have realized that many skaters are moving away from technical models and instead gravitating towards slim profile vulcanized shoes with durable rubber toe caps. During our 10 hours of skating, the rubber toe cap itself held relatively well, but was found to wear thin much quicker than other models. With that in consideration, DC had also outfitted the shoe with their Super Suede and Super Canvas material, ensuring that even if the toe cap wears out, the shoe’s lifespan is still prolonged with an extra layer of suede underneath. The super suede material did not rip during our 10 hours of weartest, and the silhouette of the shoe seemed to drive abrasion more towards the toe cap itself and away from the ollie-hole area. Overall, durability was favorable and held up well during our 10 hours of weartest. 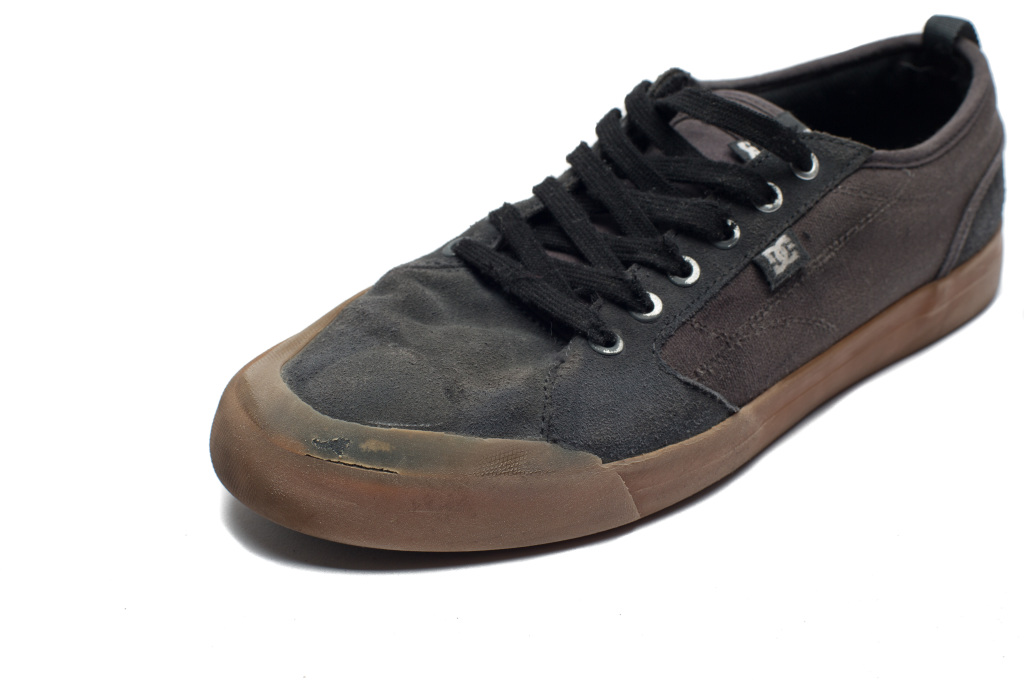 Initially, when looking at the shoe’s insole, it did not seem like there would be much to be done for cushioning. Only 7mm thick of Ortholite, the insole seems ridiculously thin to most other insoles on the market nowadays. But that is exactly where there is more than meets the eye. DC has marketed this shoe with Impact – I technology, where they’ve added cone shaped impressions into the sole to absorb and disperse impacts from landings. When wearing the shoe, the cushioning is quite surprising. It’s well padded, and the heel of the shoe has larger cone impressions that absorb medium impact landings very well. As you run closer to the toe, the cone shaped impressions are much smaller and shallower, allowing more boardfeel for the shoe. Overall, the cushioning of the shoe was quite satisfactory for low to medium impact skating. 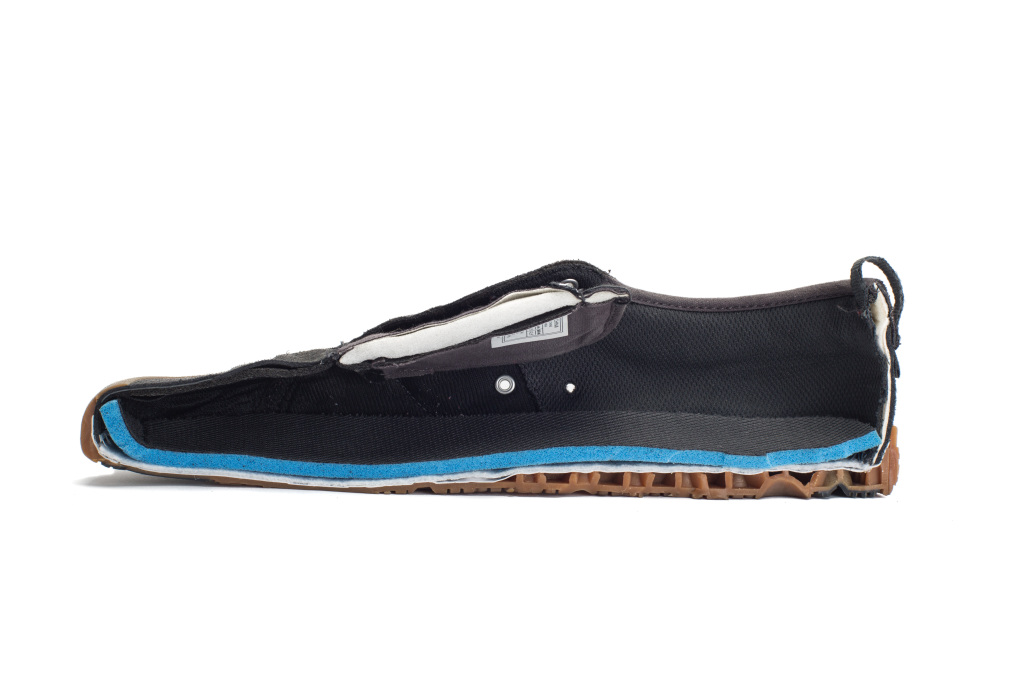 As a rubber to cap model, the toebox of the shoe held up very well, and it’s structure held up fine the whole time skating. As a low-profile vulcanized model, there wasn’t much added support in the heel and/or side panels of the shoe to hold structure after 10 hours of skating. Initially, the shoe’s structure was quite sturdy out of the box, but with more skating, the sidewalls and the toebox got much more flimsy since there was a lot of moisture from heat that couldn’t escape from the shoe. As is the case with the Evan Smith, shoes that don’t have a one piece toe-cap have a tongue that directly travels down to connect with the top of the toe-cap piece. This can cause waves in the suede either from tying your shoe laces a bit tighter than usual, or if sweat from your feet gets soaked up into the suede. In this case, waves appeared in the frontal part of the shoe and affected the rigidity of the shoe when flexing. 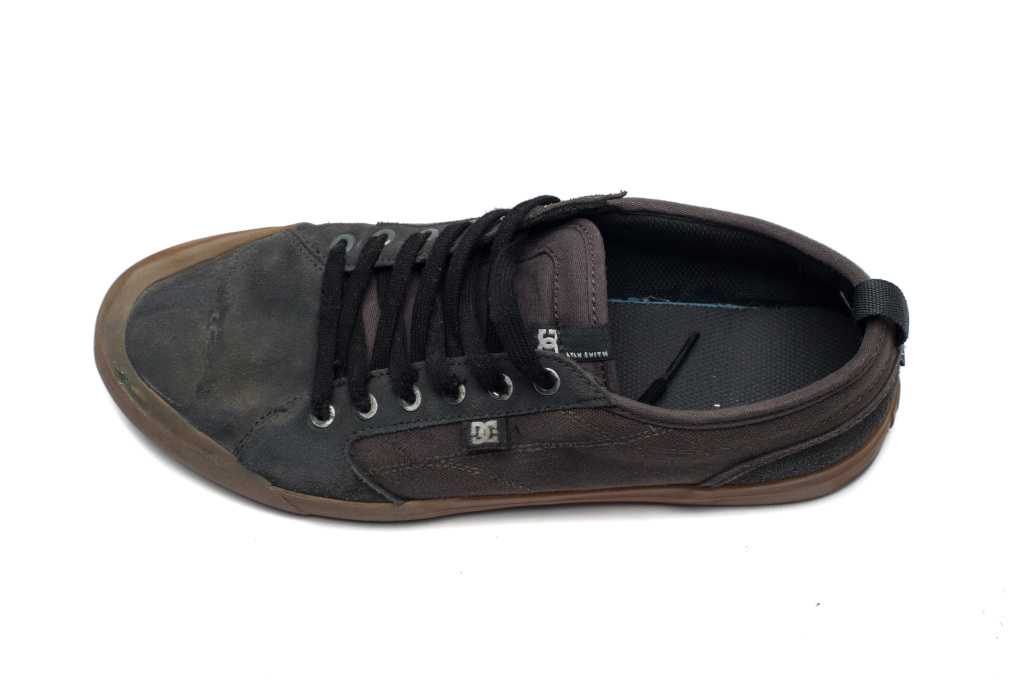 The boardfeel of this shoe was exceptional. As stated earlier, The Impact – I technology has larger and deeper cone impressions in the heel area, but as it moves on towards the toe area, the cone impressions get smaller and more shallow. In fact, it is around the midfoot area of the sole, where close contact boardfeel starts. The grip of the shoe was also extremely impressive. A lot of rubber toe-cap shoe models cover a larger amount of surface area of the toe, with the rubber toe cap almost covering up to half of the front area’s surface. Those models take a much longer time of skating to reach optimal grip, somewhere in between brand new and 2 sessions of skating. However, with this model, the rubber toe cap’s grip felt well-proportioned, optimal and well adjusted to skate right out of the box. Because the heel area had a lot of cone impressions, there was less surface area for the back part of the shoe to provide grip, and instead, more abrasion was directed towards the frontal part of the shoe’s sole. As a result, the sole of the shoe proved to wear out very easily after a few sessions. 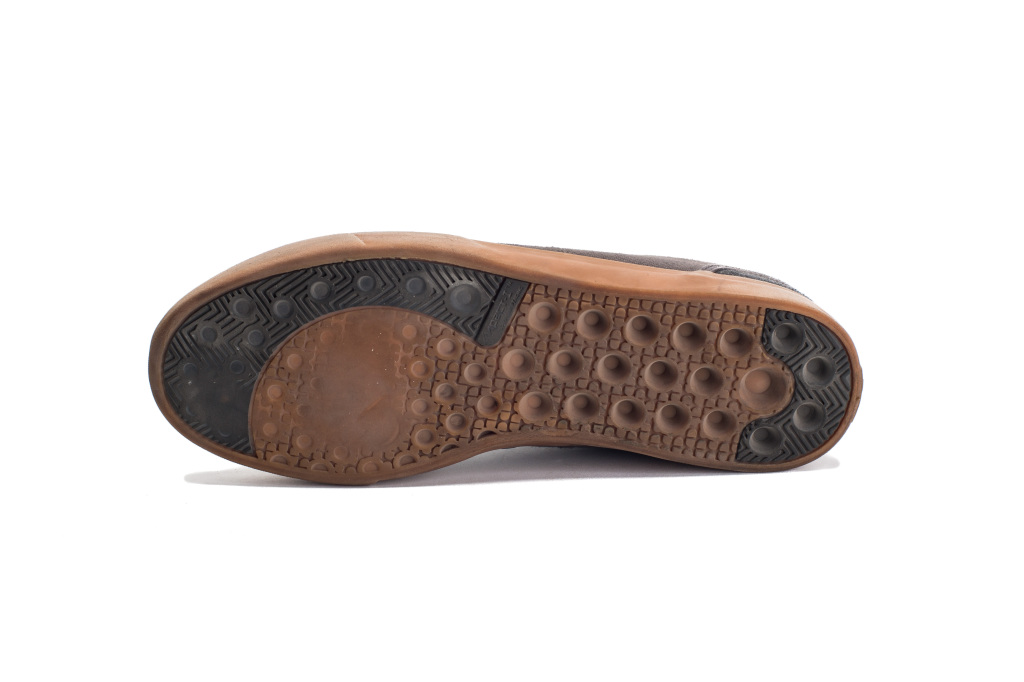 With comfort, cushioning and grip in mind, the DC Evan Smith S was ready to skate right out of the box. The shoe was very flexible and the rubber toe cap was at optimal grip after an hour of skating. The Impact-I technology along with the Ortholiner cushioning was extremely surprising for the feet, making the after-session experience less sore. One thing there was not very comfortable was the limited breathability in the design of the shoe. There were only two holes on the inner side panel of each shoe to allow for air flow to exit through. The metal eyelets around these holes also proved to be very easy to rub off and destroy, which rubbed the inside of the foot a bit during skating. There wasn’t much support for the sock collar, with very minimal padding added around the area. Moreover, the tongue of the shoe would easily move around, since there were no lock in straps or bands inside the shoe to stabilize the tongue. The sidewalls of the model were made of Super Canvas, and held up fine during the 10 hours of skating. 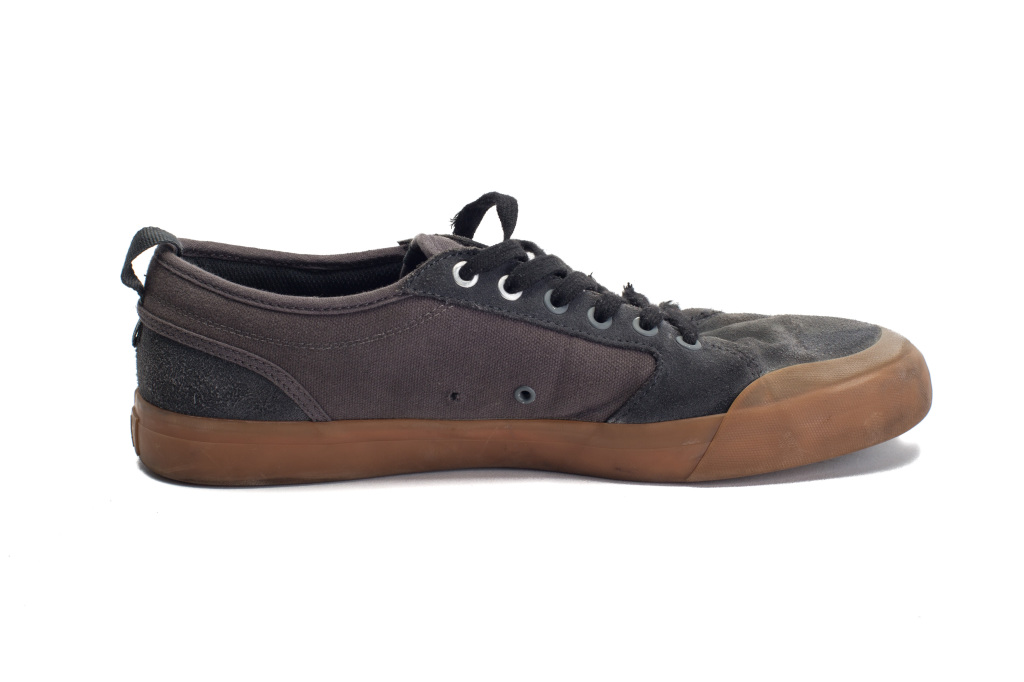 The Evan Smith S is DC’s rendition of a rubber toe cap model, and besides grip, it performs exceptionally well when it comes to boardfeel, cushioning and right out of the box comfort. With that said, the grip of the sole could be improved and the limited breathability affected the shape and comfort of the shoe after a few sessions.