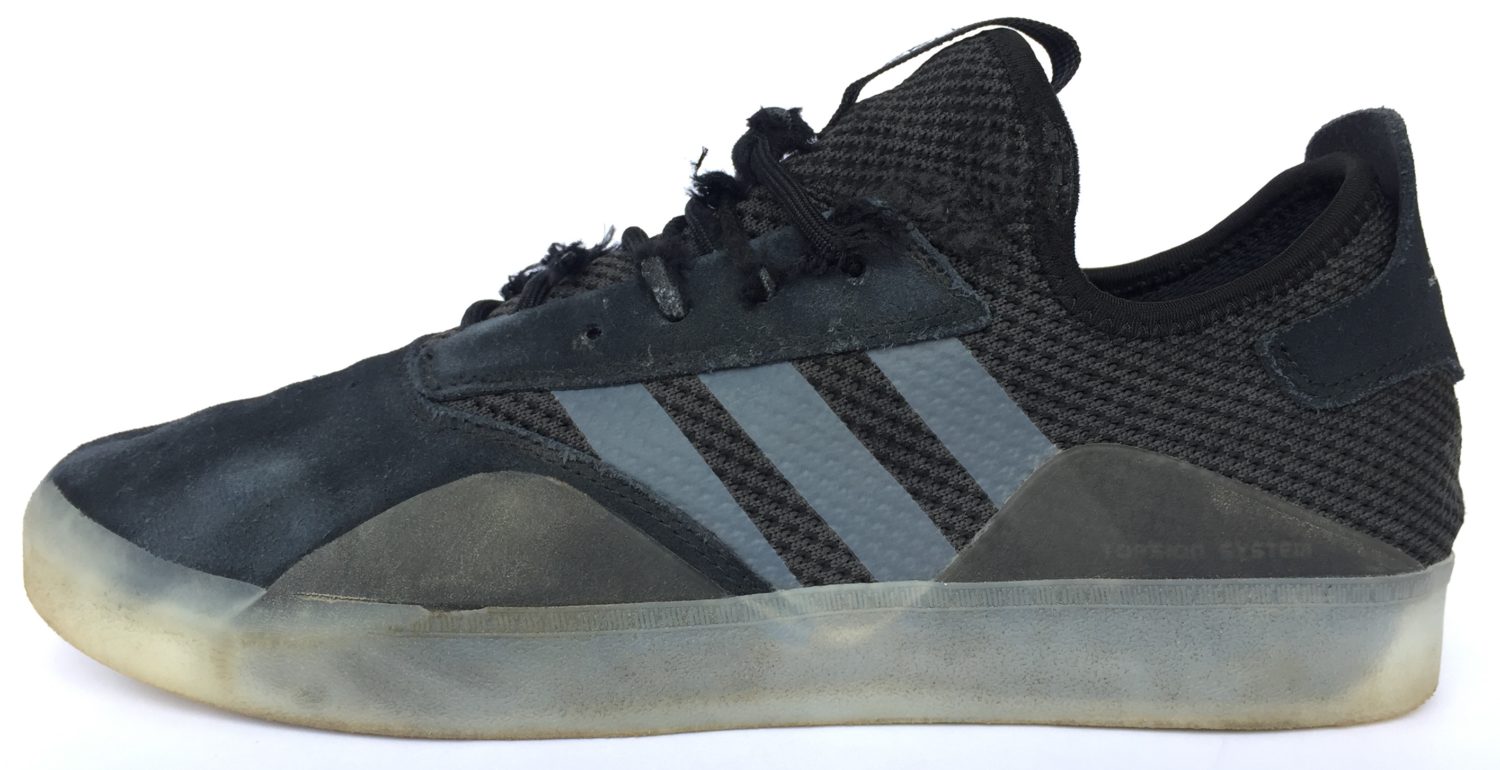 “There was a time in skating when skate shoes had their own design language. Now everything is starting to overlap, and a lot of shoes look similar.” These are the words spoken from adidas’ senior footwear designer Scott Johnston that have defined the design mantra behind the newest adidas 3ST line. For those who aren’t familiar with the name, Scott Johnston is an established veteran in the skate world. He skated heavily with teammate Karl Watson back in the Mad Circle days and became pro for Chocolate in the early 2000’s. But he eventually made the switch from Professional skater to footwear designer by joining the Lakai footwear design team in 2007. He’s had a first hand experience with the ins and outs between skate generations and their most iconic footwear designs, and now at adidas, he’s earned the opportunity to push skate footwear design to a higher performance level. The all-new 3ST line was introduced in April with two silhouettes: the 3ST.001 with laces, and the lace-less 3ST.002. The 3ST.002 greeted the general public with a Fucking Awesome collaboration and the whole 3ST line was introduced through a promotional video featuring Nakel Smith & Diego Najera. Other than this, the 3ST line snuck into the skate world’s radar with smooth and swift tactics; no elaborate over the top promotional events or tours were needed and no quirky out of context advertisements were released to over hype the shoe. Re-designing a vulcanized shoe is a challenge many designers would brush off, but the 3ST line conceptualized by Scott Johnston was carefully tested over time and cuts straight to the point: this is a technical vulc shoe adapted from historical design, and is consumer-ready for high-performance skateboarding. At Weartested, we took one look at the silhouettes and were instantly hooked on skating a pair to the very end of its lifespan. Read on below to see how our pair of the 3ST.001 performed during our initial 10-hour weartest. 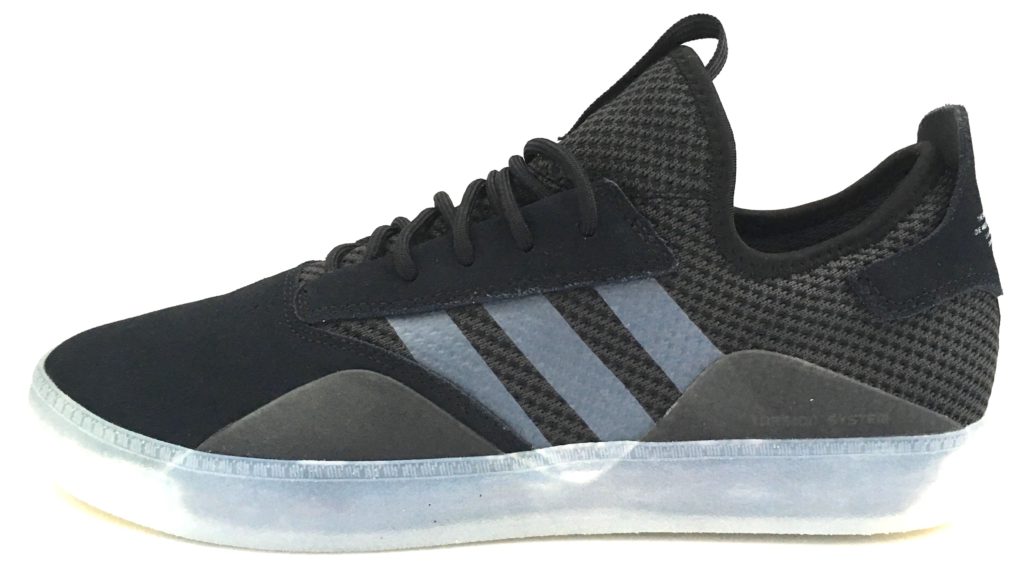 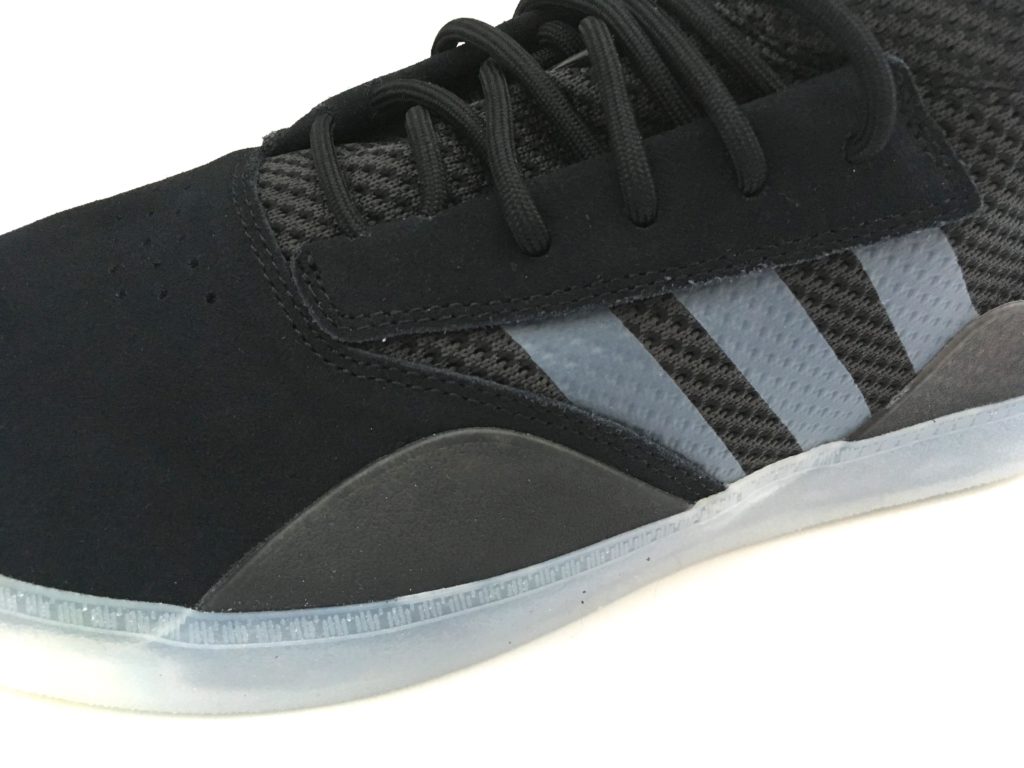 The durability of the Adidas 3ST.001 was quite good, with three main points that helped prolong the entire lifespan of the shoe. For starters, the quality of the materials used in the shoe proved to be very high-performance quality, in this case, you absolutely get what you pay for. In our 10 hours of skating for previous adidas skateboarding models, the shoe’s vulc and suede would wear out and rip through fast, but in the case of the 3ST.001, the vulcanized rubber outsole and suede was quite resilient to griptape abuse. Another aspect of the shoe was the positioning of seams around the toecap. As you can see from the pictures, the iconic knitted sock piece was positioned more towards the back of the shoe, while the critical area for the sewn edge of the toecap was placed much further from the Ollie hole area. This is a critical point of contact for griptape and by positioning the seams further back helps to prevent any seams that hold the toe cap together from ripping apart to negatively affect the structure or durability of the shoe.  In addition, the noticeable TPU triangular rubber pads on the lateral side of the shoe proved to be a great first line of defense against griptape abuse, which in turn, effectively helped to increase the durability. The combination of these three elements proved to sustain the adidas 3ST.001’s durability well during the first 10 hours of skating. However, a weak spot found after skating the model was the extremely limited durability of the laces. Although this is a tough characteristic of the shoe to design against wear, the shoe’s laces were completely worn through several times during the test period, especially in the upper area. Another flaw of the shoe is the knitted collar; the material used for the collar gets shredded up very quickly from the griptape, and the same goes for the top part of the mesh tongue, which isn’t hidden under the laces. Neither of these affect the overall performance of the shoe, but they do make the shoe look a bit untidy and as if the shoe has been skated for a really long time. 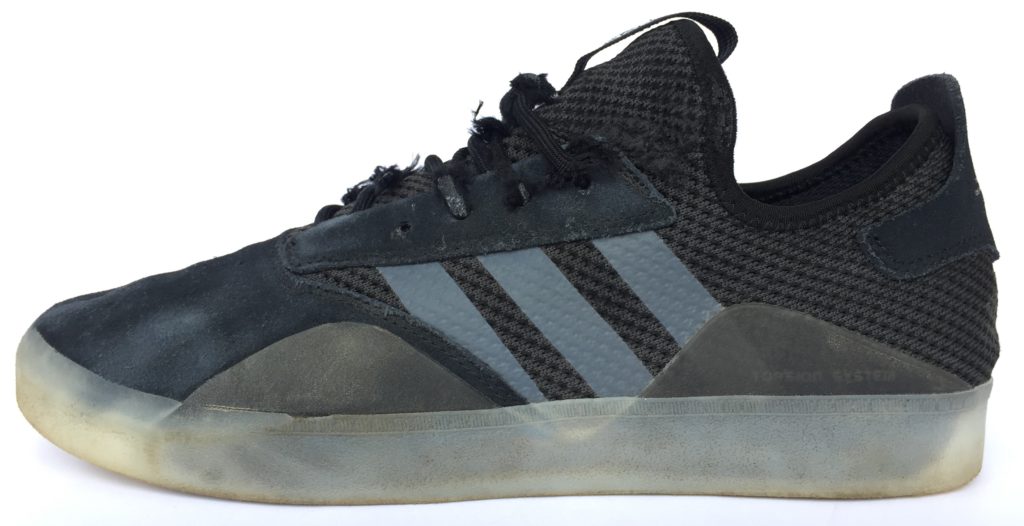 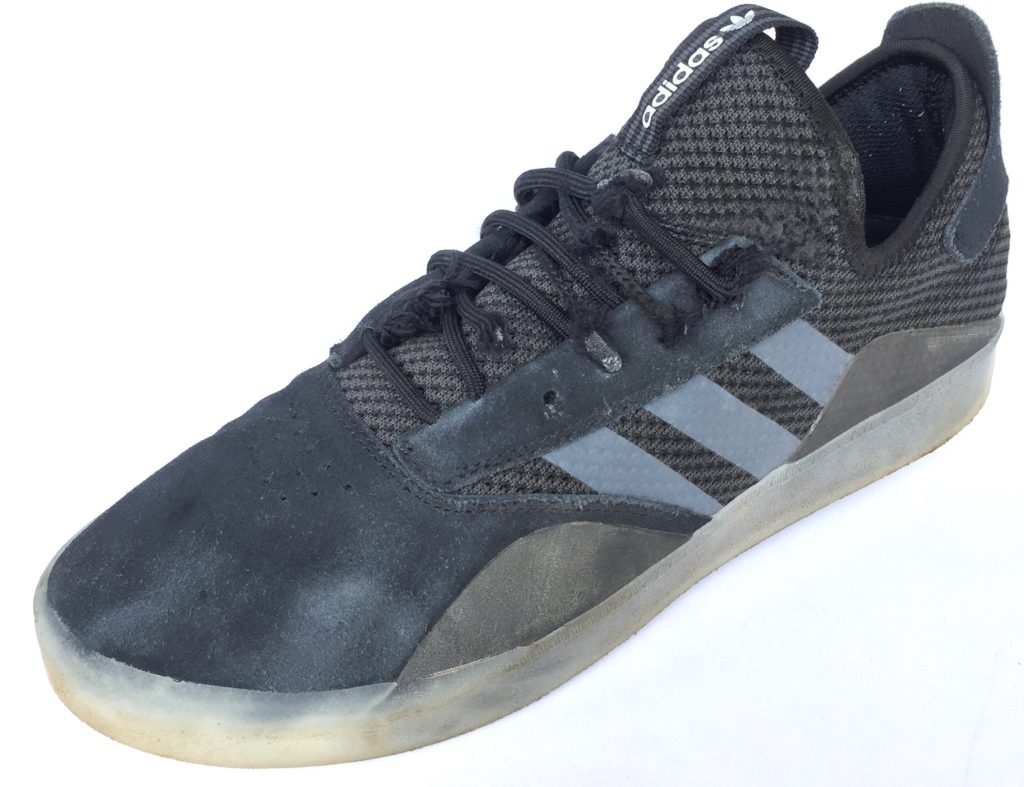 Overall, the shape of the shoe tapers off into a sleek and relatively narrow silhouette, with the heel to the midfoot area of the shoe quite compact to prevent any slippage. Moreover, the shoe’s knitted construction is found on the lateral side and heel of the shoe, which help to hold the foot very tightly against the shoe. Another aspect of the shoe’s shape that was highly favored was the thinly padded heel area, which offered a wide range of motion for the ankle but still offered a strong ankle stability.

The adidas 3ST.001 cushioning elements left us with mixed feelings. In this model, there’s no doubt that adidas worked hard to modernize their vulcanized sole. Although the crafted midsole construction has the goal of adding protective cushioning, the feeling of the sole construction is a bit too direct to the feet, and only offered average cushioning. The sole can absorb regular impacts, but nothing more and nothing less. It is a vulcanized sole with typical vulcanized cushioning, but possesses the advantages of a cupsole with regards to the stable support of the feet. The midsole is way thicker in the heel area compared to the toe area, and has the aim of offering a softer feeling of cushioning for the heel.

As aforementioned, the cushioning of the 3ST 001 was good but not exceptional, and as we all know, minimal cushioning often correlates to maximal boardfeel, which is exactly what the adidas 3ST.001 performed best in. The boardfeel of the shoe was extremely good. The vulcanized sole was quite thin, which paved a close gap between the foot and the board, and allowed for more foot control when it came to pop and flip tricks. The toe area was the best part, where the sole was the thinnest and boardfeel was amazing. Moreover, adidas used the small hexagonal pattern for the sole, which was quite soft, and only after a few sessions, broke in nicely to adapt to the concave of your feet and board. This, in the end, proved to be very effective, and helped immensely with flip tricks and flat ground. The outsole’s tread design provided consistent grip and didn’t reveal any blow out spots during the wear test.

The adidas 3ST.001 will set a standard when it comes to a skate shoe’s comfort and fit. The internal fit system has the feeling of a slip-on but the design of a regular shoe with laces. The fit system, built like a thin sock, helps to keep the shoe really close to the feet and improves security. However, since the shoe is very thin and slim, it might be a problem for skaters with wider feet. The weight of the shoe is comparable to industry standard and left a good impression while the breathability can be described only as average. Since the 3ST.001 is very comfortable and fits very close to the feet it in turn, provided exceptional stability. The lateral TPU pieces on the inner and outer side support the rather soft knit very well and leave a secure and stable feeling for the feet underneath. One highlight of the shoe is the adidas patented Torsion system, which is a supportive platform in the midfoot and has the ability to allow your forefoot and rear foot flex independently. Although this isn’t new technology, it is the first time adidas has adapted this torsion system into their skate footwear and can help combat improper flexing of your foot’s arch…which in skate terms mean a decrease in probable heel bruising, hot pockets and ankle twists. 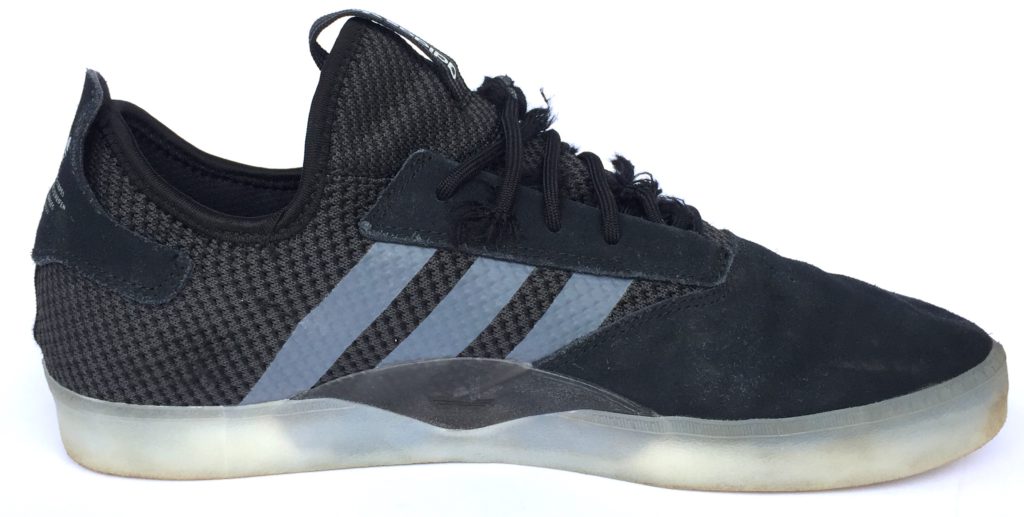 The introduction of the 3ST line from adidas has set a completely new high performance standard for vulcanized skate shoe models. From the technical elements tested in our 10 hours, the stability, comfort, boardfeel and grip were absolute highlights of the shoe. However, the cushioning, as expected from most vulcanized models, needed more support, and the durability of the material around the knitted collar needs an improvement.