A continuation of the evolving product line-up, the Last Resort AB VM003 was released earlier this year in January, in a clean and minimal low cut silhouette featured in canvas.  After trying out and reviewing the first two models that were dropped, our team was excited to get our hands on the newest model to see what additions and hidden perks were designed into the seemingly simple design. Interestingly enough, the model was highlighted by an “All Vegan” tag, which is definitely a step in the right direction as more brands are trying to take measures to ensure sustainable practices in their design, choice of materials and manufacturing. For larger brands, it may be even harder (and more time consuming) to switch factories and change an already existing procedure, just to have a slight change towards sustainable practices. But this does show that for the third model released by Last Resort AB, they were able to get hands on and ensure their product was modified with their best intentions at heart. Since the release of this model, Last Resort AB has been busy, with opening a channel into the US market, adding rider Paul Grund to the team, and also filming a new video that will hopefully drop sometime this year. They’ve also been releasing incredible adverts and beautifully shot trick photos, so we can’t wait to see the final video with creative skating from the likes of Chris Milic, Jesse Alba, and also David Stenström. But until then, read on below to see how the much anticipated Last Resort AB VM003 performed in our wear test!

The shoe fits lightly bigger so we recommend going half a size down.

Last Resort simplified their previous model VM002 and introduced the VM003, without the toe cap and in canvas. Both features are important in helping increase durability so this section of the review was particularly important to see how the VM003 performed in the 10 hour wear test. In summary, the VM003, for a canvas vulcanized model has pretty solid durability. The areas which showed most signs of wear was the sidewall area and the frontal part of the shoe, where a hole in the canvas appeared. More often than not, skating a canvas shoe usually leads to holes, rips through the sock and leads to bleeding feet. When it came to the VM003, there was an additional material layer under the canvas, which was made out of a durable and soft material that helped increase the lifespan of the shoe. The VM003 also kept its shape and protected the seams of the shoe, thanks to the very stable vulcanized construction and high foxing tape. This feature also helped protect the shoe’s upper from abrasion; the height of the sole and the foxing tape helped to withstand all 10 hours of skating with plenty of life left in it. The eyelets for the laces are also positioned higher up and closer to each other, minimizing the surface area of contact, which helped protect the laces well.

When talking about the Last Resort AB shoes, Pontus Alv recently mentioned in an interview in Solo Skateboard Magazine that “these shoes are not constructed to jump down big gaps”. At least he’s honest. With that said, the cushioning abilities of the Last Resort AB VM003 model were definitely average. The sole itself is very thin, which decreases its cushioning abilities. The picture of the shoe’s profile shows a glued in insole  (all Last Resort models’ insole are glued in) that is higher in the heel and lower in the toe area. This slightly thicker molded PU insole is made out of two foam hardness which creates a nice step-in and walking feeling, but it still can’t keep up with skating big gaps.

Shape is an important design element of the VM003. The shoe is very slim, tight and functionally designed to protect the laces. When first worn, the shoe feels extremely flexible. The heel and midfoot area run parallel and the shape starts narrowing in the toe area to end in a nice pointy toebox. One important thing to mention that was specifically noticed on the VM003 is the comparison of the first step in and how the shoe developed after 2-3 sessions: at the beginning the model may feel a bit loose on the foot, but don’ trust that first feeling! Once broken in, the comfort and the shape really adapt to the feet and the shape of the shoe hugs the feet closely.

Since the shoe features basic cushioning qualities, the boardfeel is excellent. Last Resort AB emphasized a lot on the sole pattern design, with the pattern running rather wide to avoid small stones getting stuck in the sole, which is also complemented by a finer sole pattern in the area where grip is most needed. The sole throughout the whole toebox and frontal area is really thin, which leads to great contact with the board. Grip did not decrease throughout our 10-hour weartest and it performed very well with a lot of life left in them for future sessions. Boardfeel of the shoe was good; the thin insole flattens out much more in the first third of the shoe and the midsole itself is fairly thin, which provided for a responsive board feel for the feet.

As a canvas model, the VM003 features adequate stability, but still can’t be compared to stability of a vulcanized suede or even a cupsole model. Since the shoe is slim and has a rather low cut, it fits to your foot very well after two to three sessions. The shoe does not have many elements of support, so it is quite soft but feels also broken in from the beginning. The heel is quite soft, but the material choice for the heel construction grips the ankle, preventing the feeling of slippage when skating and walking. The inner construction is very simple, almost no overlaying materials which helps reduces the risk of pressure points. 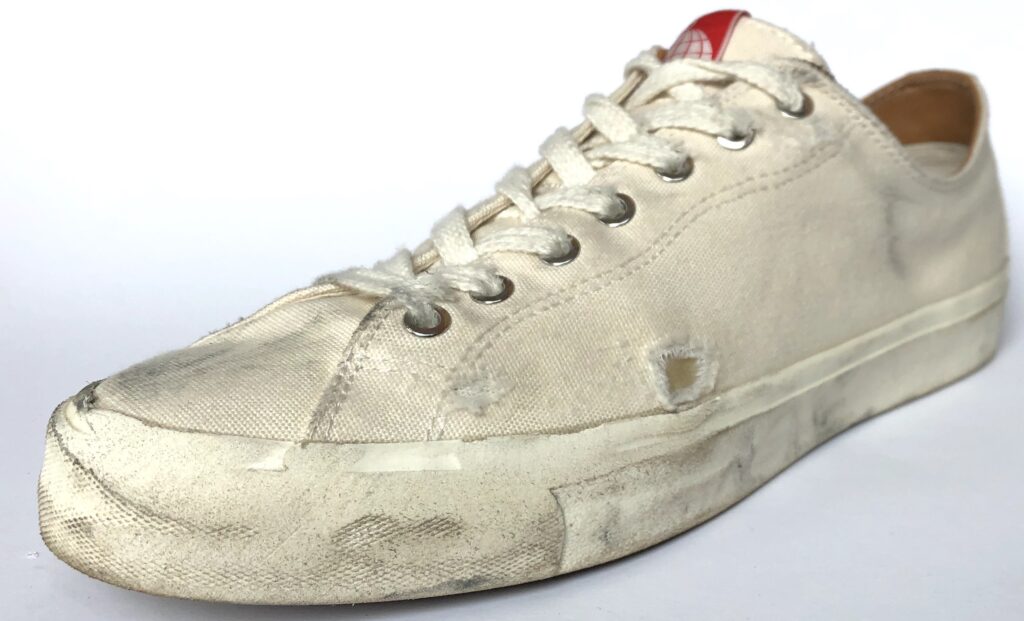 The Last Resort AB VM003 is the most simple silhouette offered from their three models. With that, the shoe features incredible boardfeel and grip, as well as solid durability, for a vulcanized canvas model. The only flaw noticed were the shoe’s cushioning features and the stability. Overall, the VM003 is designed for the skaters who like the close feel of their board and a well balanced grip!