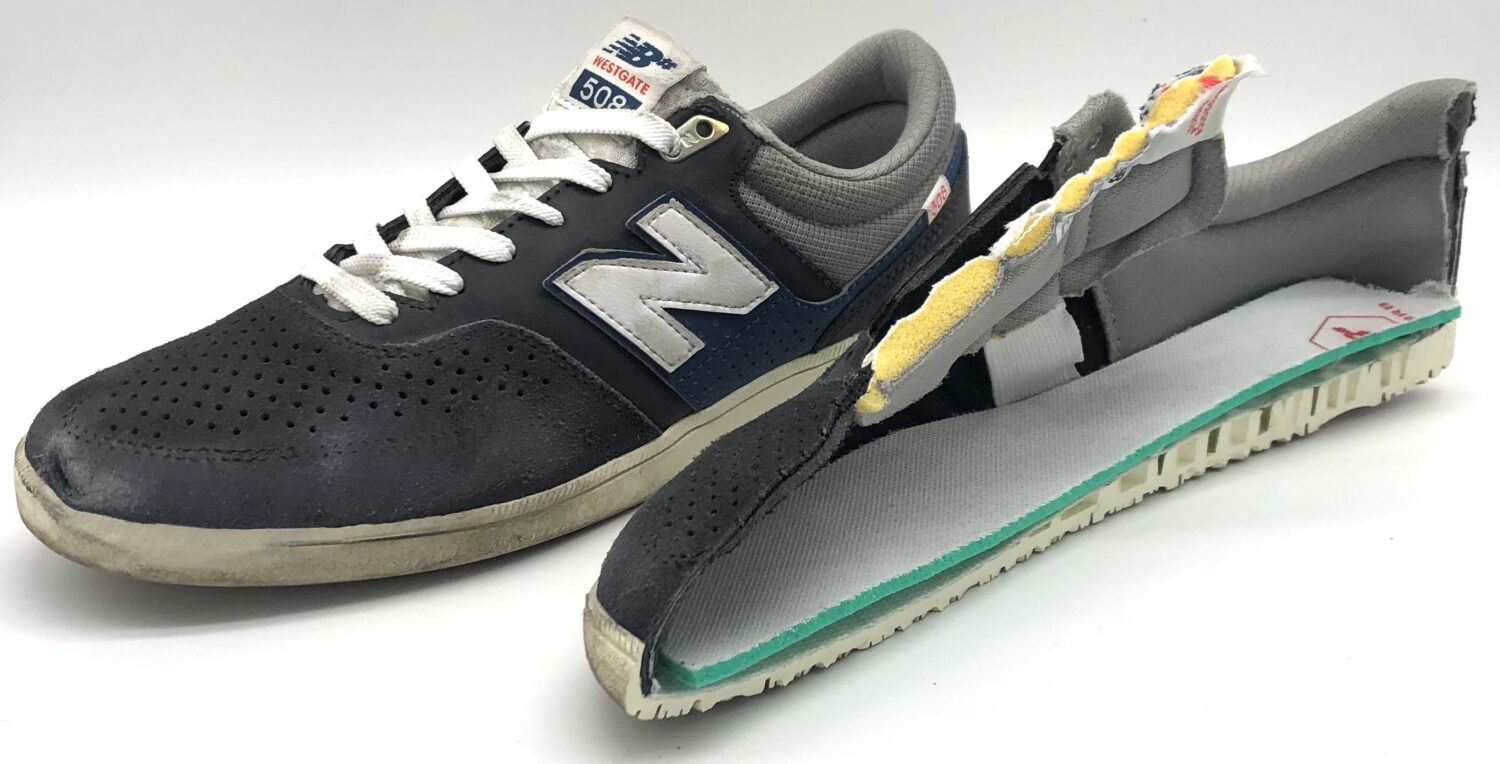 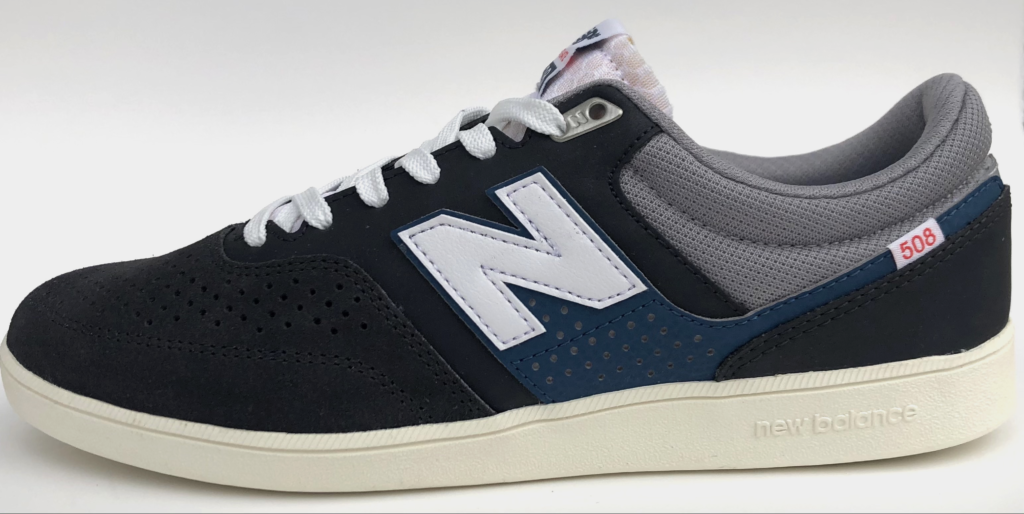 The New Balance 508 runs a half size bigger; we recommend going a half size smaller than what you usually wear.

The three main areas to evaluate the durability of a skate shoe include the toe area, the mid foot area, and the outsole. Starting with the toe area, the Westgate 508 features a durable suede one pice toe cap. The most noticeable signs of wear are in the kick flip area, but the suede was holding our 10 hour test strongly but with a small appearing hole. The second area, the midfoot, didn’t show much sign of wear. Although some seams that connected the toe pieces with the sidewall piece ripped, this didn’t affect the overall performance. Lastly, the third aspect of evaluating the durability of a shoe is the shoe’s outsole. The side areas of the outsole helped protect the toe area and the durability was good. The bottom of the outsole showed very slight signs of wear, but to conclude, the durability of the Westgate 508 was really good. 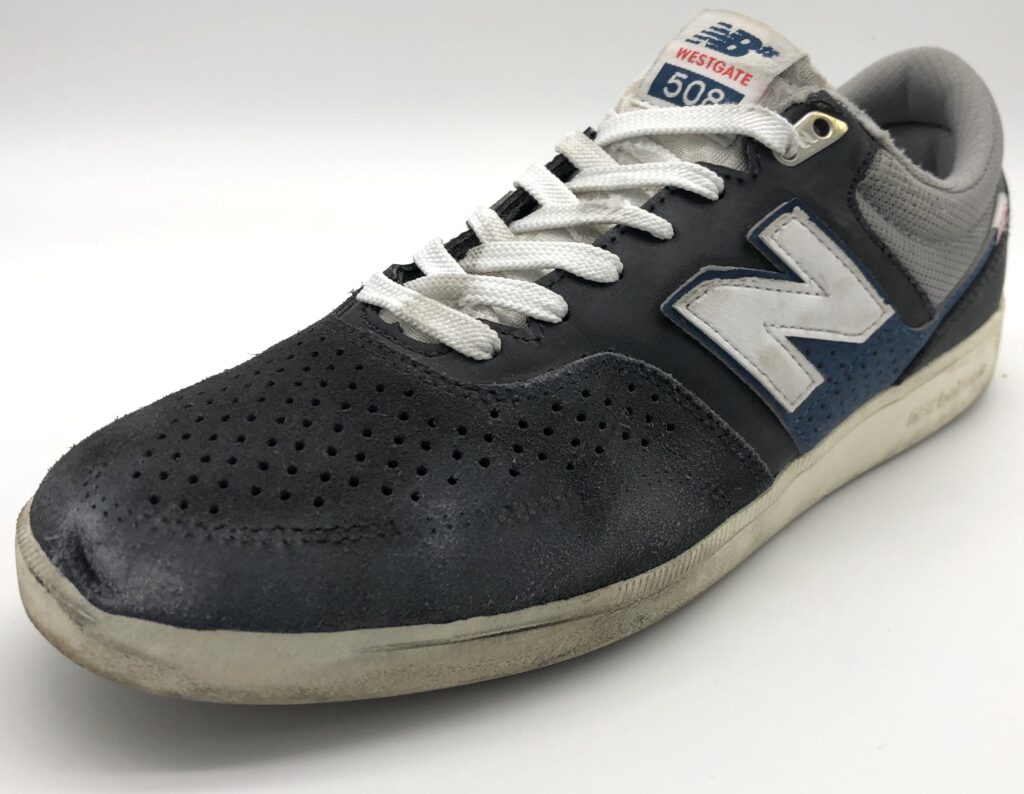 The cushioning of the 508 is solid; the insole is thin and minimal, which sacrificed a bit of cushioning in exchange for more boardfeel. This is especially the case in the first third of the toe area, where the sole was the thinnest. In the second third medial area, the cushioning area increases and the impact from five-right stairs was still fairly absorbed by the insole. The area with the most amount of cushioning was the heel area, where the midsole has a honey comb construction which helped to absorb and disperse the impact from landings evenly. In the end, it was clear that the focus of the Westgate 508 was to offer a minimally padded shoe that felt great on the feet and had excellent boardfeel.

Just from looking at the aesthetic of the shoe, you’ll instantly be wondering how the shoe fits on foot and skates. When we first tried them on, the shoe felt quite narrow; the shape of the Westgate 508 feels like it tapers from the midfoot to the toe, and ends into a nice rounded toe area. The heel, midfoot and toe area, whoever, felt quite snug on the feet.

As aforementioned, the cushioning of the New Balance Westgate 508 was minimal, which is a characteristic that lends to maximizing boardfeel. This is exactly what the Westgate 508 excelled in. The boardfeel was exceptional; the sole itself is quite thin, which minimizes the space between the foot and the board, and allows for more control for flip tricks and pop. The toe area was the best part, where the sole was the thinnest and boardfeel was amazing. Moreover, the pattern of the sole itself is quite soft, and after a few sessions, broke in nicely to adapt and form to the concaves of your feet and board. This in the end proved to be very effective, and helped immensely with flip tricks and flatground. The outsole features a fine tread pattern that provided consistent grip and didn’t reveal any blow out spots during the weartest.

The Westgate 508 is a comfortable shoe. The selection of material chosen for the upper was a mix between high quality suede, synthetic materials and mesh. When designing the shoe, NB# made sure that the materials were positioned in areas where they performed best, which increased durability and comfort. In addition, the shoe’s breathability was great, which we feel is always a highlight when it comes to comfort. The stability of the Westgate 508 is average, with the mid foot area providing the best stability. Several layers of synthetic material help keep the area stable and the cut in that area is allows for the foot to be well stabilized. The heel area featured some constructional elements to provide stability, but it is more average. 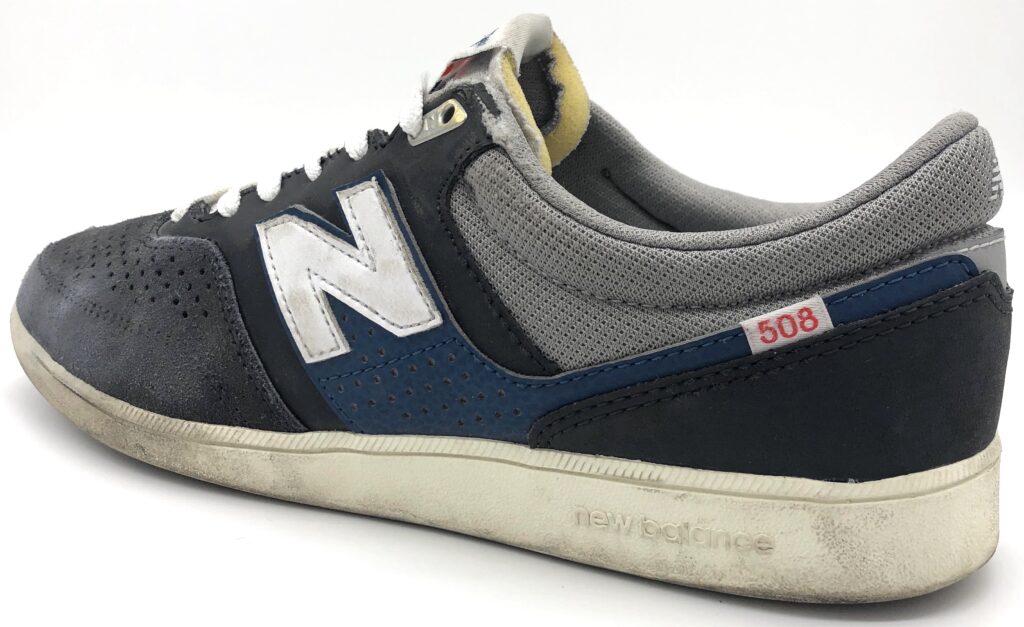 Brandon Westgate’s first New Balance Numeric pro model was an extremely technical shoe offering; his sequel, the Westgate 508, went for a more simple approach and exceeded our expectations with highlights in boardfeel, grip, and durability. With that said, both heel stability and cushioning could be improved.