We’re starting 2017 off with a banger; New Balance Numeric hooked us up with a pair of their most technical models to weartest, the NB Numeric 868. Any mention of the New Balance Numeric team, an immediate thought pops into our heads, “Holy shit, this team is stacked”. This thought is only further reinforced with the visual masterpieces they put out each year. Since our last New Balance Numeric review of the Brighton 344, NB Numeric’s program has been steadily churning out content from their riders; grabbing our attention by putting out “Tinto de Verano” on Thrasher, and following it with a “Rooks of Hazard” tour video on Transworld. At first glance, you may be turned off by the 868 and dismiss it as a skate shoe due to it’s running shoe inspired silhouette. But the 868 is no joke. Running at 110 bucks, it is a direct product of intensive research from NB’s sports research lab and is equipped from heel to toe with New Balance’s patented technology to make skating in the shoe more resistant to wear and tear. There’s been a numerous amount of shoe models to come out that try to win the “technical battle”, and the 868 is New Balance Numeric’s take on it. Read on below to see how the 868 did in our weartest, and whether or not New Balance Numeric’s most technical shoe proves worthy for your feet. 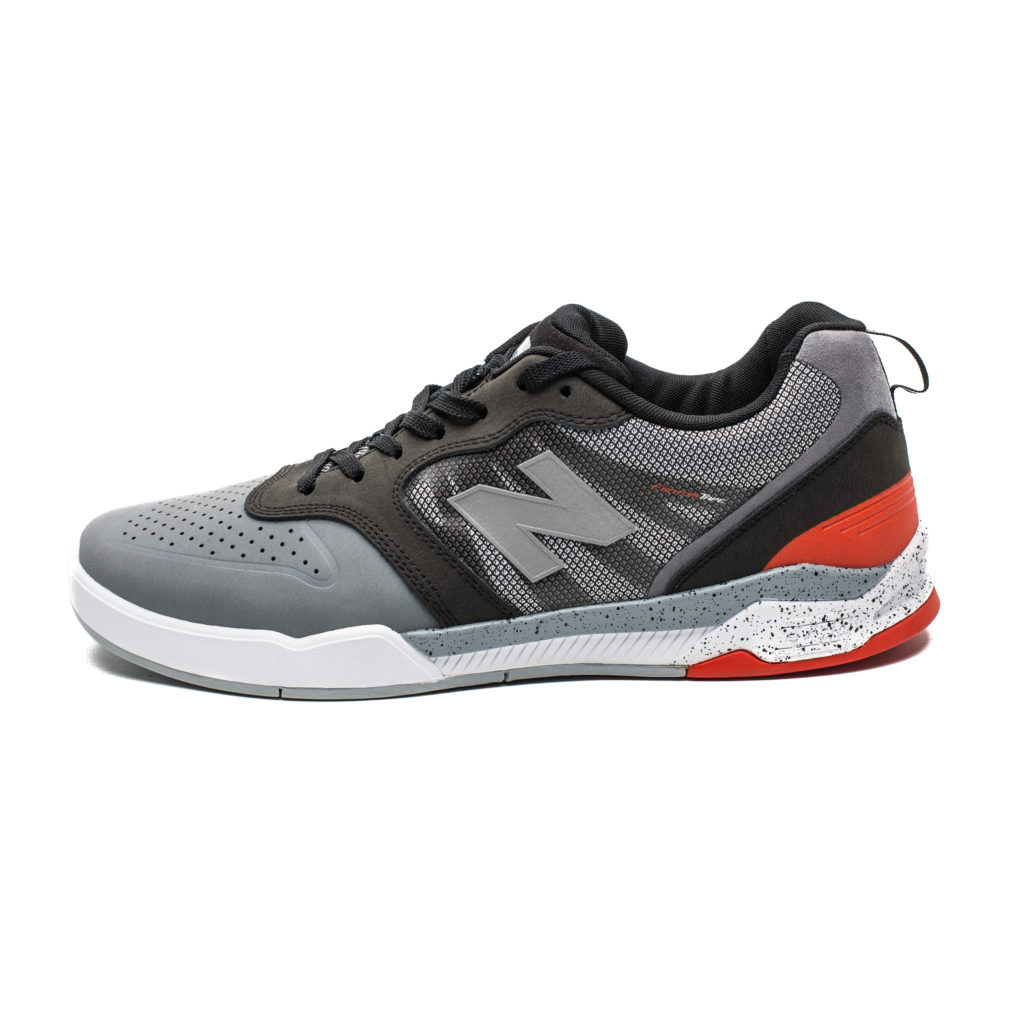 The New Balance Numeric 868 runs a half size small, we recommend going a half size bigger than what you usually wear.

If there’s one thing we want to get right into about how the shoe performed, it would be the durability test. This shoe was impressive. Impressive in the sense that most shoes we weartest have holes in the toe or kickflip area after 10 hours, or have a limited lifespan left after the weartest. The 868 however, had zero holes come out, had a lot more sessions left in them, and the durability didn’t falter even as the shoe was introduced to strenous wear and tear. The upper of the shoe uses New Balance’s Fantom Fit technology, which is a skeletally designed upper that fuses two extremely thin materials together via high temperatures to create an upper that is lightweight, structured, and in skateboarding’s case, durable. When skating, the first layer of durability is the grey upper that you see in the pictures; this first layer of defense is made out of a synthetic leather material that coats the shoe, and is fused to another thicker layer of high quality suede underneath. Although the first layer is thin, don’t underestimate it’s strength. The consistent griptape abrasion against the shoe’s upper only wore the upper down to a few patches here and there, and at most, revealed the second layer of suede underneath, but was far from tearing open. The added bonus was that it was a seamless construction on the upper, so no bumming out on ripped seams leading to open patches. Lastly, the second layer of suede was not only a defense mechanism, but also a point of structure and stability; the area where kickflips and ollies take the most abuse was well structured and further reinforced the points of contact, whereas other shoes’ uppers may start getting flimsy and reveal more vulnerable points of abrasion to wear out faster. 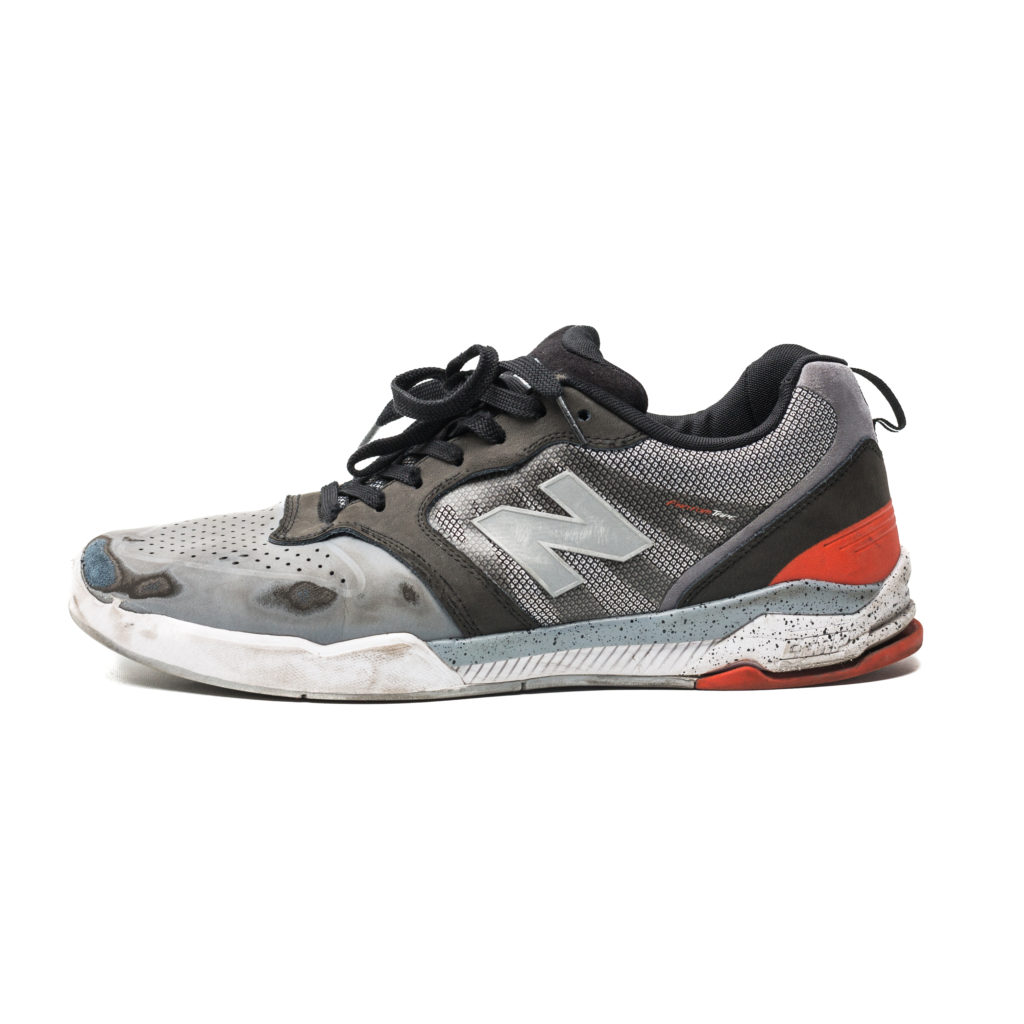 The 868 has 2 NB Numeric patented technologies and a polyurethane insole that attribute to the cushioning of the model and work together towards shock absorption. The shoe’s main cushioning feature is their C-Cap midsole, which is a dual density foam composite that is thicker and stiffer from the midfoot to the heel to be focsed more on shock absorption, and thinner from the midfoot to the toe, which allows for more boardfeel. In the heel of the midsole, lies New Balance’s second patented technology, a neon colored underfoot material that is low to the ground and works with the C-Cap midsole to provide additional support to prevent heel bruises. Lying on top of this midsole construction is a closed cell PU insole that consists of tiny gas bubbles that are trapped within the insole that help with the structure and cushioning of the insole. While all these cushioning elements contribute to a 3 part shock absorption system, the cushioning of the shoe itself was only ok. In fact, the C-Cap midsole and the closed cell PU insole turned out to be quite stiff, and although much better than most shoe models on the market, it wasn’t the highlight of the shoe. 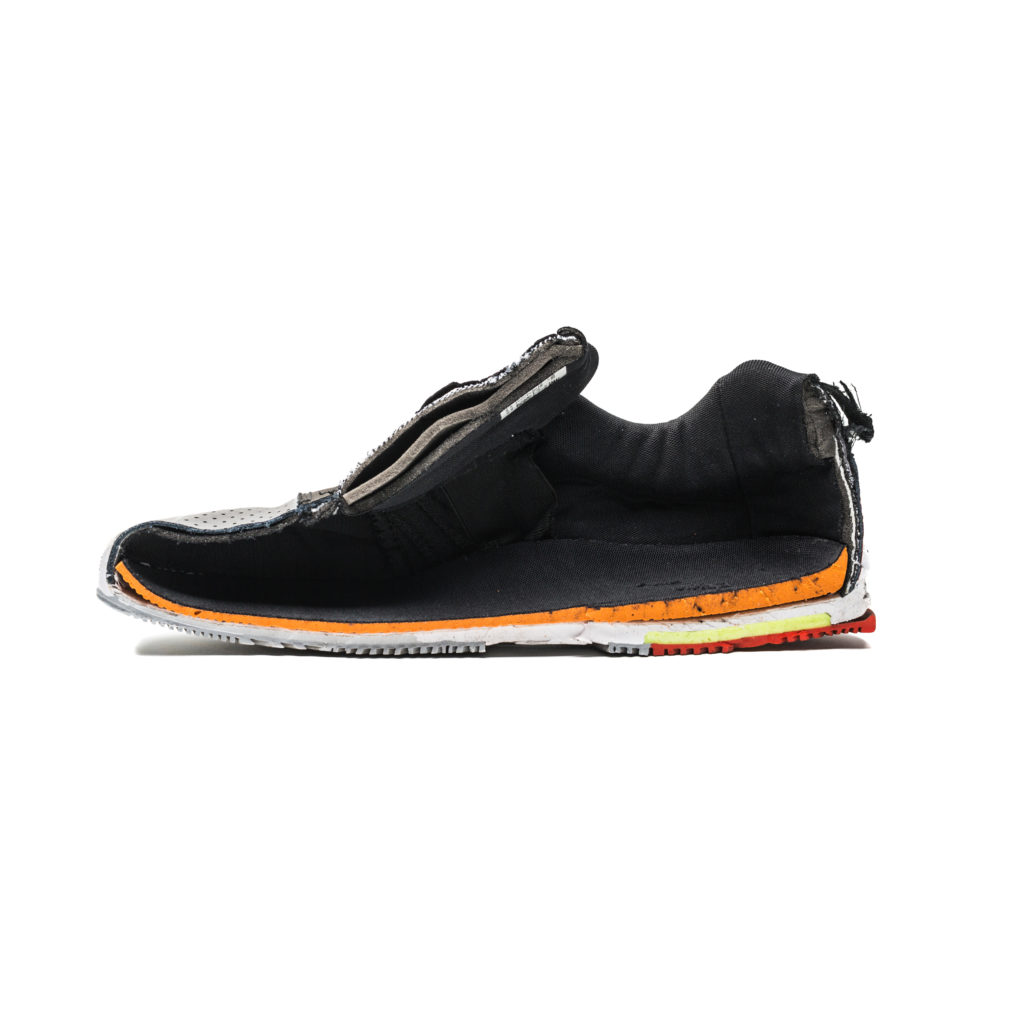 Just looking at the running shoe inspired sihoulette of the shoe will lead you to wonder how the shoe fits and skates. Upon first impression, the shoe feels quite narrow and short. The shape of the shoe itself feels like it tapers from the midfoot to the toe, only to flatten and round out in the front, instead of becoming a pointed tip. Moreover, the shoe itself looks a bit bulky, but doesn’t feel like that when worn and skated. As aformentioned, the upper’s Fantom Fit helped reinforce the upper of the shoe, which didn’t make the upper sink inwards and helped maintain the shape of the toe. All in all, the shape of the shoe was different, took time getting used to, but turned out to be effective. 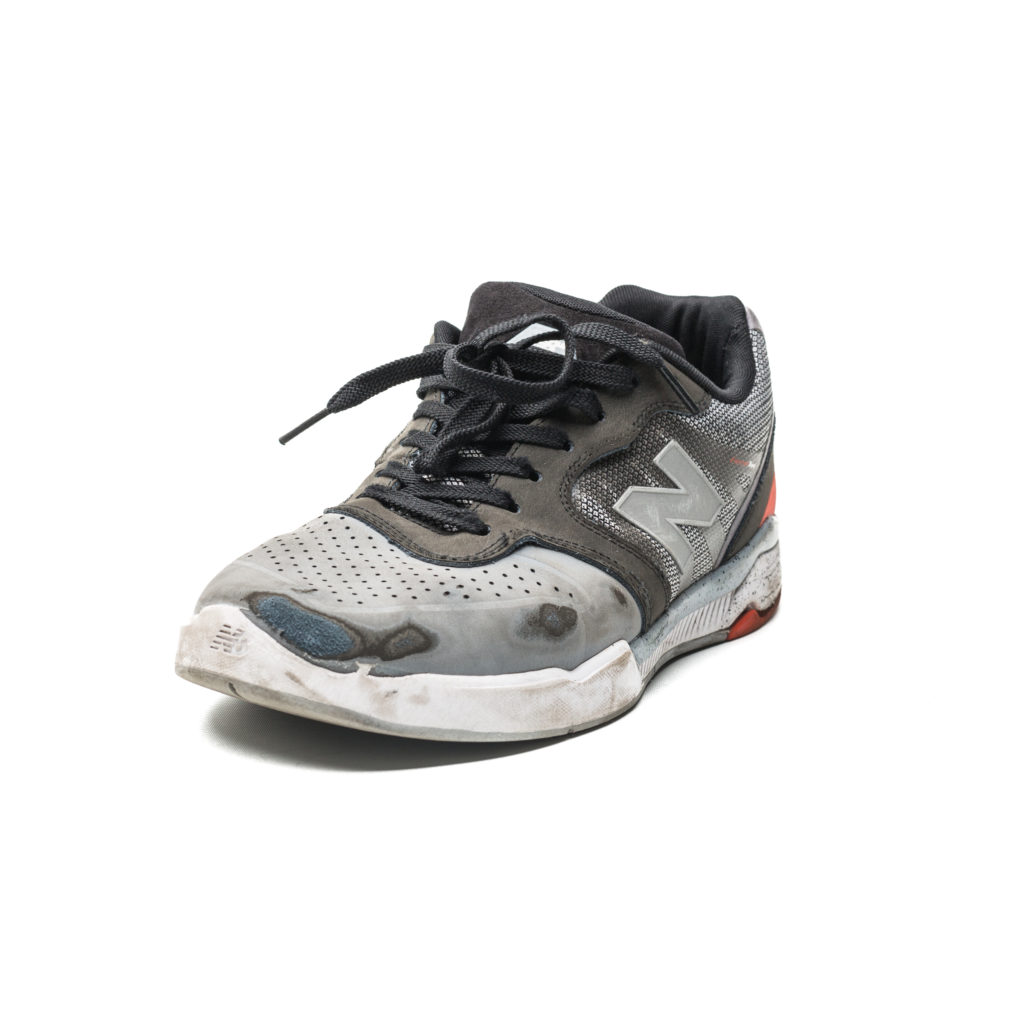 The boardfeel of the New Balance 868 took some time getting used to. As a cupsole model, initially the C-Cap midsole in the first third of the shoe proved to be quite stiff and inflexible. However, after a few sessions the sole and midsole of the shoe broke in and the boardfeel greatly enhanced. One downside was that after a few hours of skating, the glue on the heel of the sole came apart and became a loose flap as seen in the pictures. With that said, the grip of the sole was exceptional; New Balance used their patented Ndurance rubber compound for the tread of the sole, and it was extremely grippy, with absolutely no blow out spots on the sole. Not to mention, the overall outsole of the shoe was also made out of this compound and proved to be extremely durable and grippy.

Another highlight of the shoe was it’s stability. The shoe itself is a snug fit, with a few different factors working together to ensure a tight and compacted fit for the feet. For starters, the shoe’s heel collar consists of a high quality breathable mesh stuffed with a foam composite that stabilizes the ankle and heel into a deep pocket. The tongue of the shoe is made of the same material, but is held in place by two flexible straps that work to stabilize the superior surface of the feet. The sidewalls of the shoe really highlight the comfort and stability of the shoe; each lateral sidewall is made of an extremely breatheable mesh panel that is held up by a seamless imprinted overlay called Fantom Tape. This allows maximum breathability without sacrificing structural support and leaving seams vulnerable to abrasion. The feet were completely stabilized within the shoe, which eliminated slippage and helped with the consistency of flick tricks. During the whole weartest, breathability was exceptional which made the shoes quite comfortable to wear. The high quality materials used in the 868 really do show a difference and help wick away moisture rather than trapping it. Often times, good stability of a shoe is overlooked and not really focused on, but when it came to the 868, it was an excellent surprise. 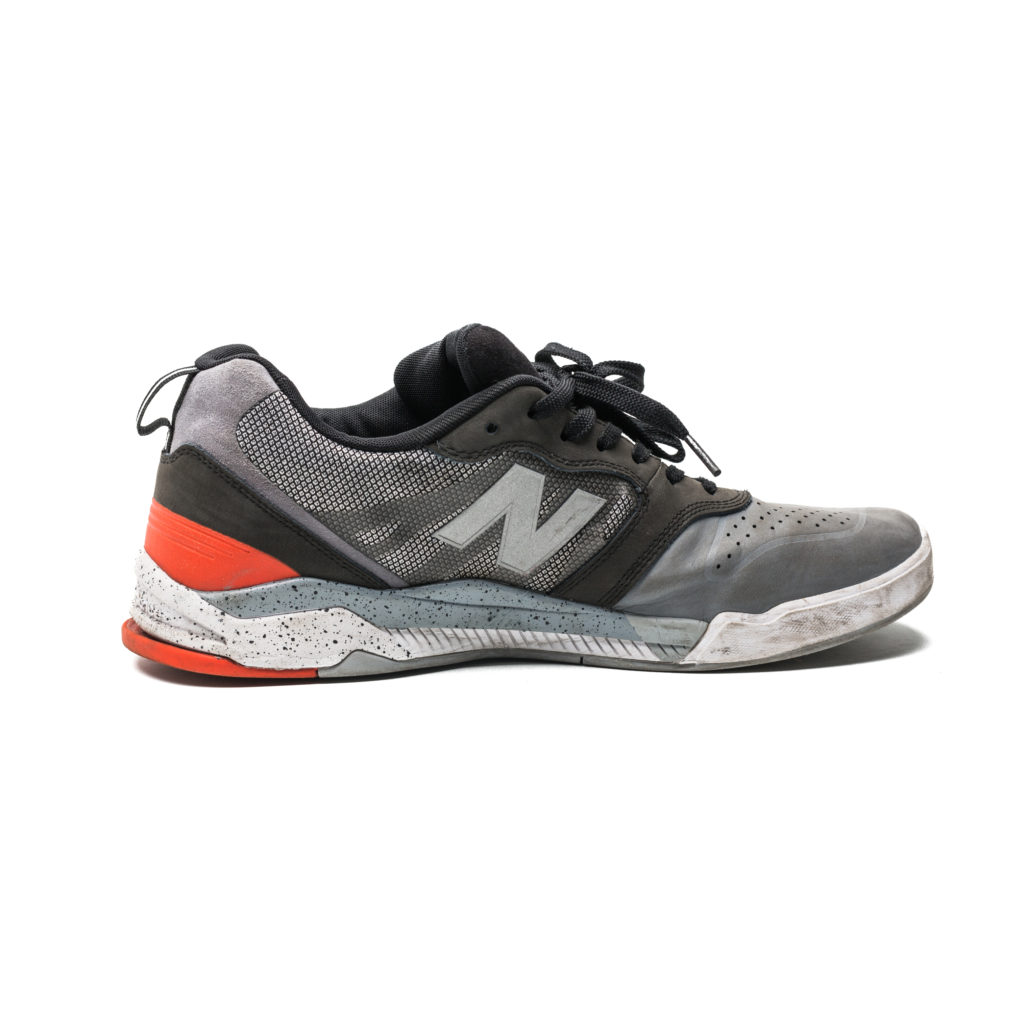 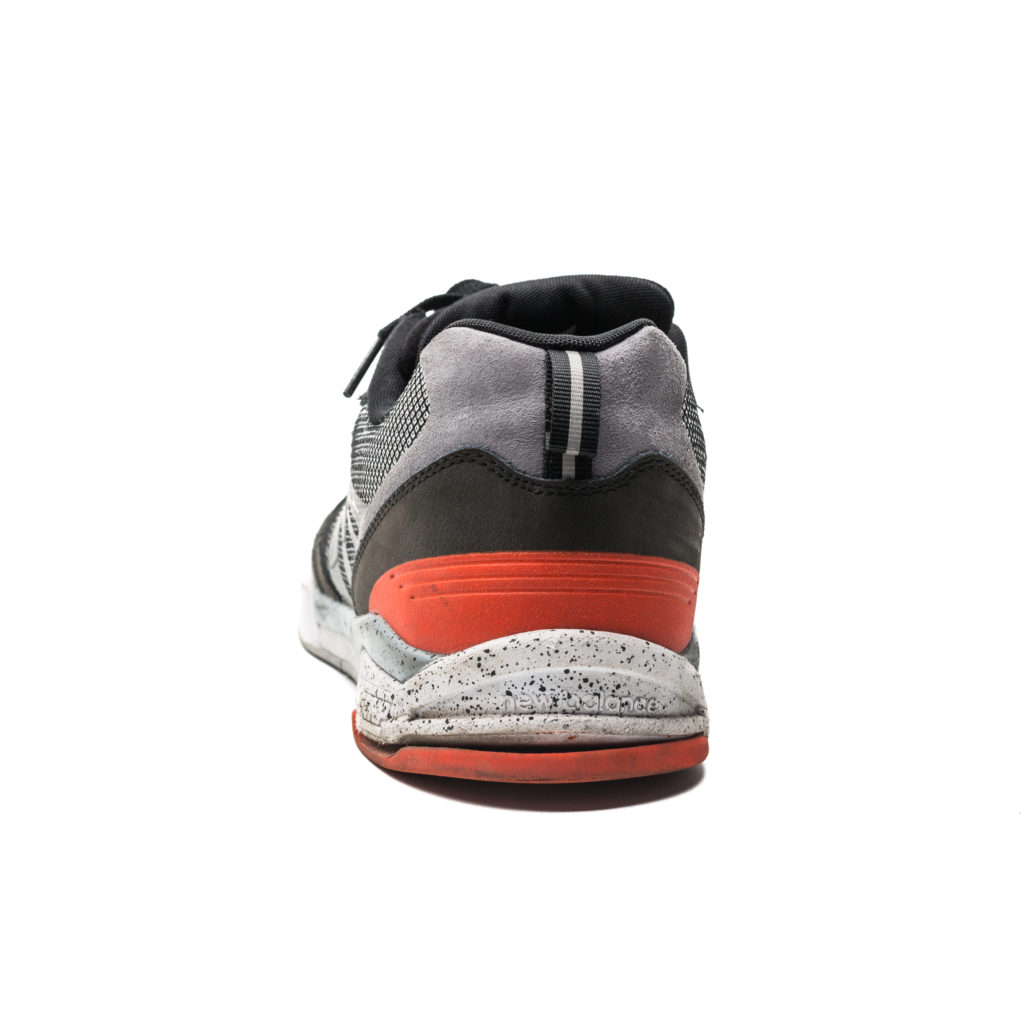 The New Balance Numeric 868’s running inspired silhouette may seem unsettling at first, but the skate adapted shoe was full of pleasant surprises. Durability, comfort and stability were the highlights of the shoe, while boardfeel and stiffness could be improved. For those who are curious, these shoes are definitely worth trying out. You won’t be disappointed.