Jon Dickson reminds me of a silent beast, motivated by danger and humbled by gnarly bails over the course of his skate career. He skates with incredible speed, charging at a spot with the intention to stomp the bolts of his board when he lands. The style, grace and attitude that follow are undeniably natural; just watch his first line in the Deathwish video if you need a reference. Over the years, Jon was picked up by Deathwish, skating with the original squad including Erik Ellington, Brian “Slash Hansen”, Lizard King, and Seen Williams. Emerica soon started sending him shoes, and officially joined the team with a breakout part in Emerica’s Made Chapter Two. Since then, the amazing parts kept coming, both for Deathwish and Emerica, with the recent one being Emerica’s “Green” video released two months back. When Emerica’s Wino model came out, Jon was a strong advocate of the shoe, highlighting his taste for durable shoes featuring a clean cut design. Earlier this March, Emerica announced the release of the new Dickson pro model shoe, and the silhouette of the shoe strongly reminded us of the WIno G6 that was tested last year. We noticed it was a bit more beefed up with new technology, with technical and design input from Jon himself. In the days of overcompensation in the skate footwear, it was refreshing for us to get our hands on a pair of the Dickson’s, read on below to see how Emerica’s in-house technology performed in our 10-hour weartest.

The clean-cut design of the Dickson is the true highlight for the overall shoe’s durability; but don’t mistake simplicity as a weakness, Emerica has also added a bunch of hidden technical features to further improve the shoe’s performance and lifespan. The most notable feature of the shoe is the one piece vamp in the forefoot area, which is well constructed by design as the panels stretch far back to the midfoot, which prevented redirected a lot of griptape contact away from the double seams in the ollie zone. Most abuse from skating is happening in the forefoot area, so Emerica took matters into their own hands, and added an additional thin rubber underlay beneath the suede, called Flick Shield. In our 10-hour test, the suede did not rip at all, so the Flick Shield didn’t show (you can see it in the half cut picture) but the addition of this Flick Shield technology not only provides more rigidity and structure to the toe cap area, but will serve as a second layer of defense and definitely make the shoe skate longer once the suede is ripped. Also, the shoe featured a double wrapped vulcanized construction which made the shoe’s outsole much thicker and helped withstand all 10 hours of skating, with minimal wear on the suede. Although overall the durability of the Dickson is very good, the laces did not last the first session due to its wide placement construction, and the lining of the heel collar did show signs of wear within the first 3 hours of skating.

The G6 cushioning has been in the product line for quite some time now and most Emerica signature models will feature this high-impact protective cushioning. G6 is made of an impact resistant Polyurethane foam. Emerica basically made a very thin vulcanized construction to have good boardfeel and flexibility of the sole while the G6 insole has the job of protecting from impact. This is a rather typical construction for vulc shoes. With that said, the impact filters through the midsole a bit, but ultimately hits directly to the feet through the G6 insole. If you take the Emerica Wino for example, it was originally an after-session chilling shoe, and the addition of the G6 helped it handle small to medium impact, proving the performance capabilities. All in all, the cushioning was fair for the Emerica Dickson.

The shape of the Dickson is a feature that’s well appreciated in a time where skate shoes are often either bulked up, cramped down, with an overcompensation of technical design features. The Dickson is long, a bit slimmer, and its weight of padding is evenly distributed which helps for a responsive flick. The toe piece tapers off a bit, but rounds out well. Moreover, the vulcanized construction is double layered so even when the first layer starts diagonally from griptape wear, there’s another layer there to maintain the shape of the shoe.

As with most vulcanized models, boardfeel and grip are the highlights of the shoe. This was definitely the case with the Dickson, which proved to have amazing grip throughout the 10 hour weartest, and had a lot of life in them for future sessions. The main technical feature of the shoe in terms of grip was the double vulcanized construction. It’s a classic design that many vulcanized skate shoes implement, however shoes do vary between the quality of materials used for the actual vulcanized rubber. As can be seen in the pictures, the rubber of the shoe worn down to a black layer, showing that there is another layer of protection underneath. This made the shoe’s grip stable and didn’t falter despite it getting worn down. The grip of the sole was good too; it features the triangle tread pattern and no blowout spots occurred through our weartest. Boardfeel of the shoe was good; the G6 insole flattens out much more in the first third of the shoe and the midsole itself is fairly thin, which provided for a responsive board feel for the feet.

The comfort of a skateboard shoe is mainly influenced by its inner construction, weight and breathability. The inner construction of the Dickson is well designed for a comfortable fit, and the tongue is also held in position with big centering straps. With that said, the weight and breathability of the shoe do leave a negative impression after skating on a hot day. The shoe is heavy and does not leave much room for moisture to ventilate out of the shoe. The stability is influenced by how the shoe is keeping its shape as well as how the shoe hugs the foot. Both were positive features of the Dickson, resulting in a good comfort. The step-in area is well designed and the feeling is well supported by a stiffening element which helps to have a secure feeling. 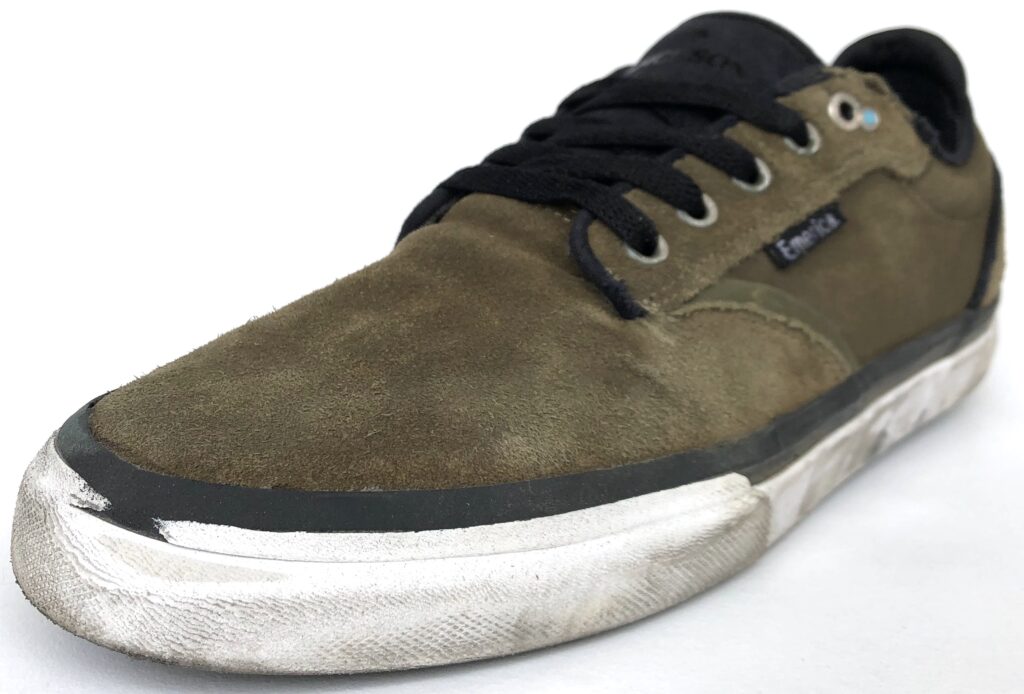 The Emerica Dickson stands out due its great durability, boardfeel and grip, solidifying it’s status as one of the top vulcanized skateboard shoes on the market. The flaws noticed was the shoe’s weight and the breathability.

Check out Parade.com to get a pair.