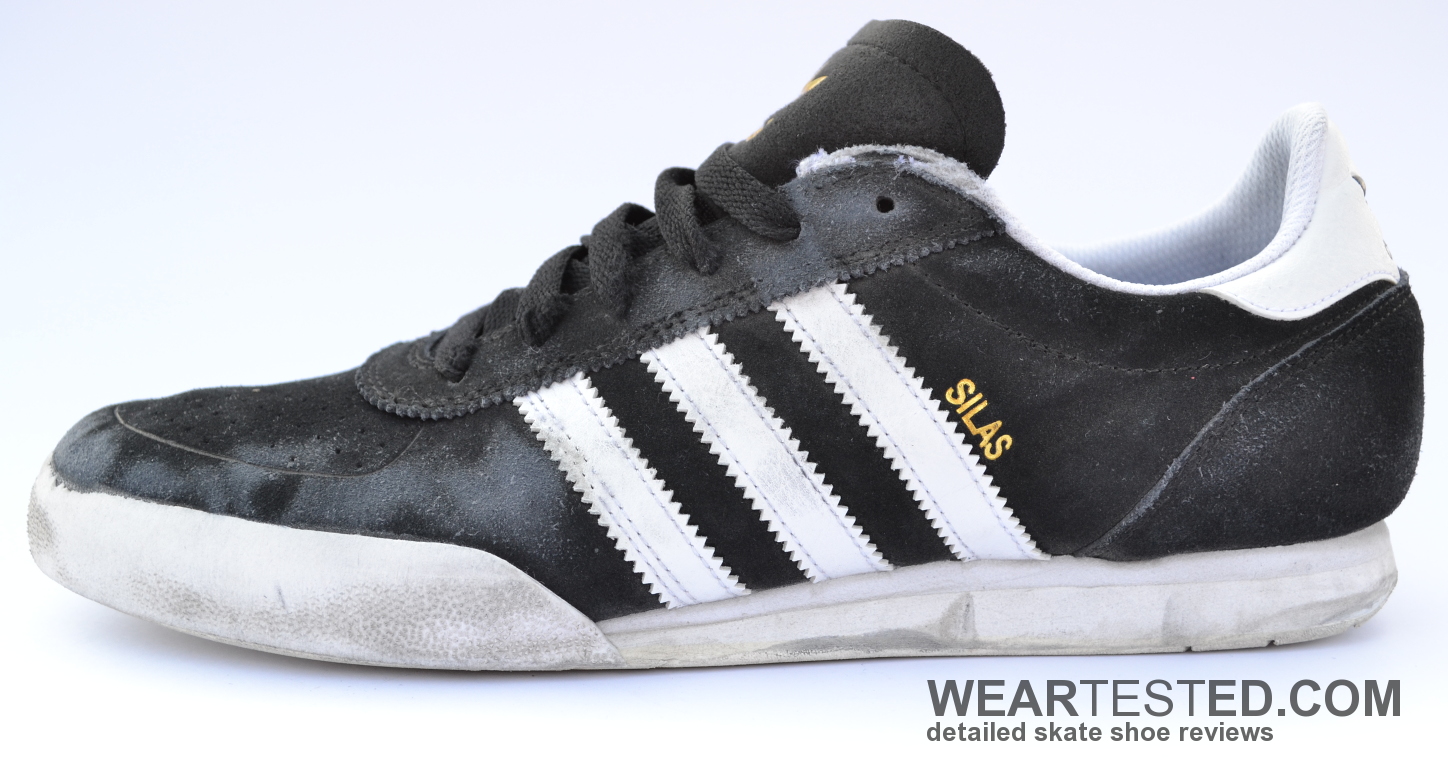 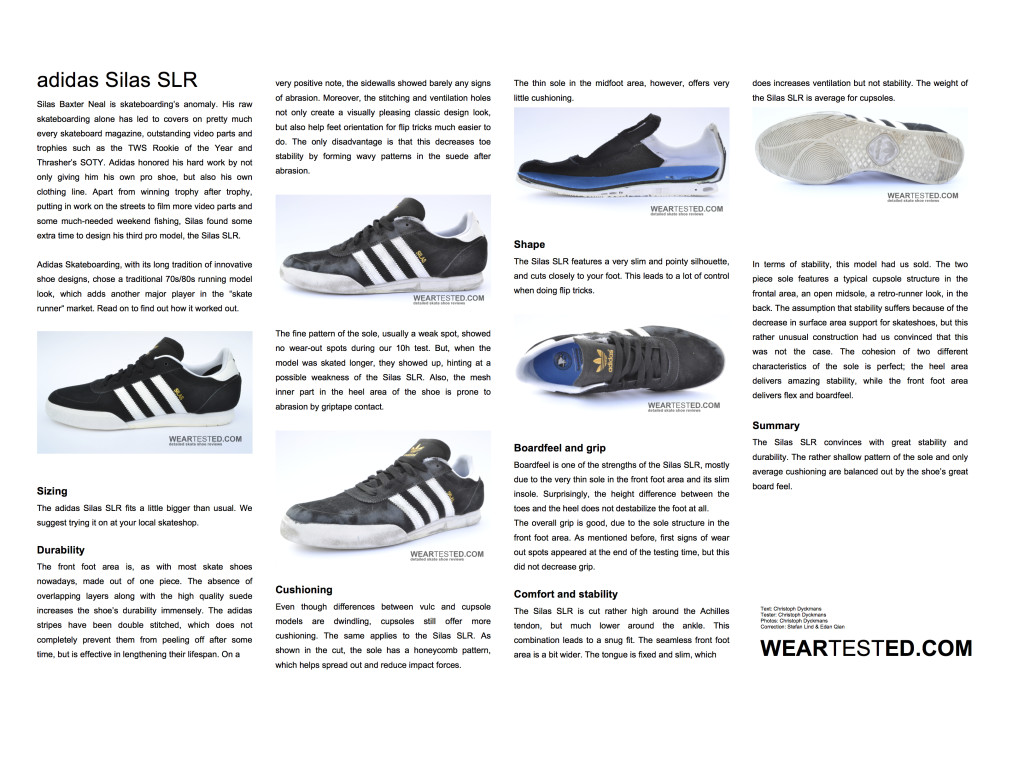 Silas Baxter Neal is skateboarding’s anomaly. His raw skateboarding alone has led to covers on pretty much every skateboard magazine, outstanding video parts and trophies such as the TWS Rookie of the Year and Thrasher’s SOTY. Adidas honored his hard work by not only giving him his own pro shoe, but also his own clothing line. Apart from winning trophy after trophy, putting in work on the streets to film more video parts and some much-needed weekend fishing, Silas found some extra time to design his third pro model, the Silas SLR.

Adidas Skateboarding, with its long tradition of innovative shoe designs, chose a traditional 70s/80s running model look, which adds another major player in the “skate runner“ market. Read on to find out how it worked out. 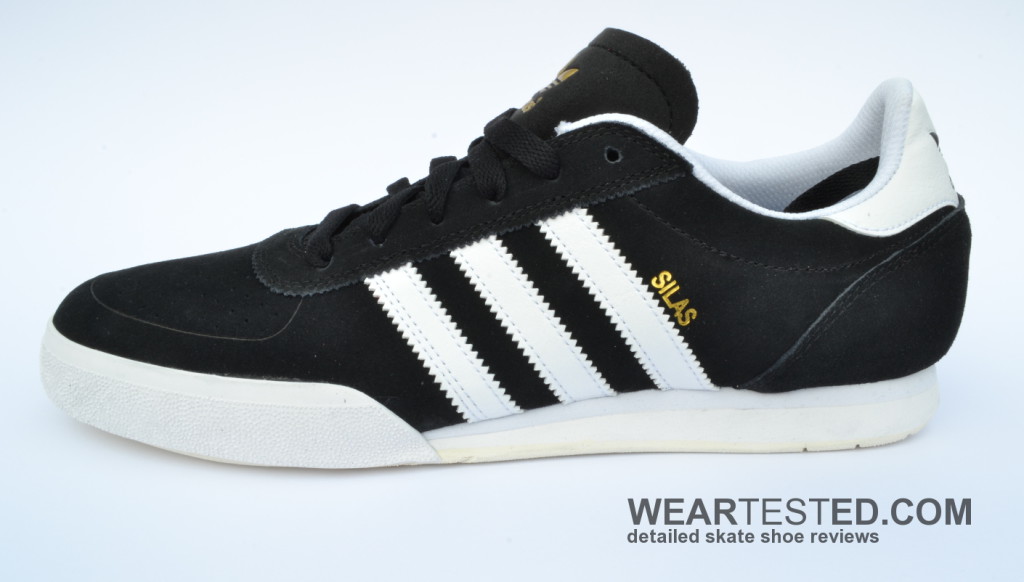 The adidas Silas SLR fits a little bigger than usual. We suggest trying it on at your local skateshop.

The front foot area is, as with most skate shoes nowadays, made out of one piece. The absence of overlapping layers along with the high quality suede increases the shoe’s durability immensely. The adidas stripes have been double stitched, which does not completely prevent them from peeling off after some time, but is effective in lengthening their lifespan. On a very positive note, the sidewalls showed barely any signs of abrasion. Moreover, the stitching and ventilation holes not only create a visually pleasing classic design look, but also help feet orientation for flip tricks much easier to do. The only disadvantage is that this decreases toe stability by forming wavy patterns in the suede. 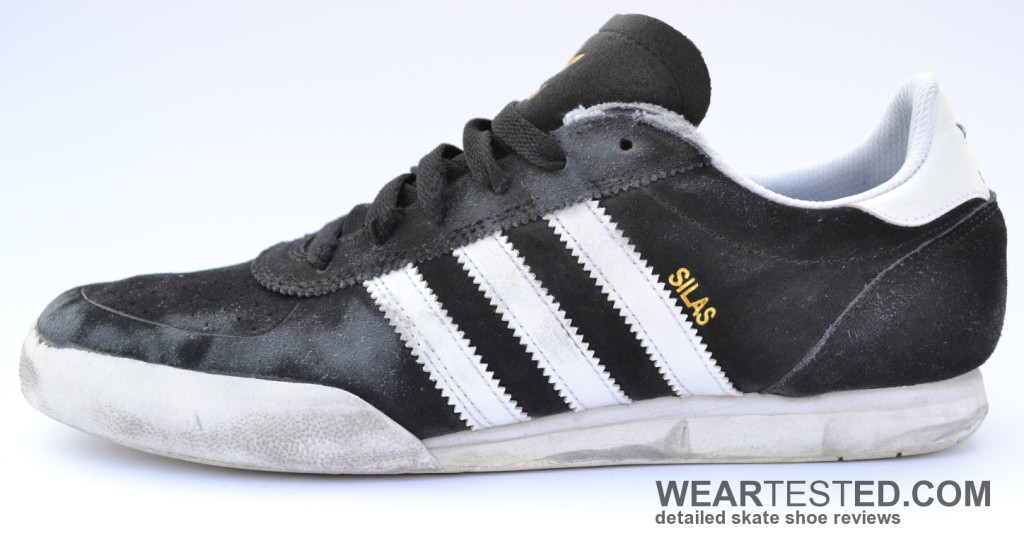 The fine pattern of the sole, usually a weak spot, showed no wear-out spots during our 10h test. But, when the model was skated longer, they showed up, hinting at a possible weakness of the Silas SLR. A minor flaw of the design is the mesh collar, which frays out quickly and doesn’t look appealing within hours. 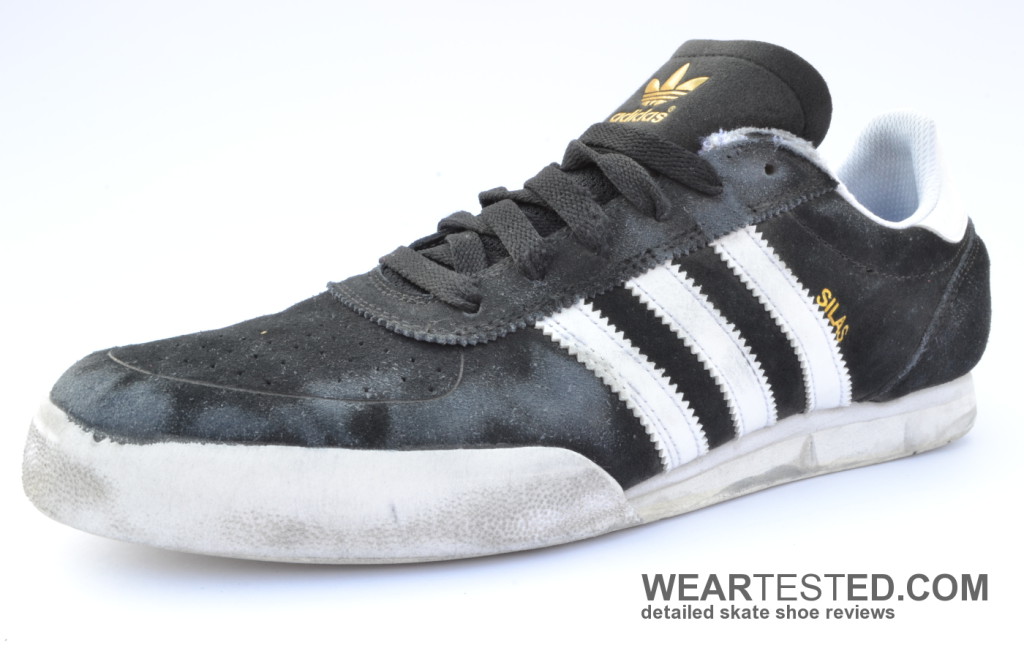 Even though differences between vulc and cupsole models are dwindling, cupsoles still offer more cushioning. The same applies to the Silas SLR. As shown in the cut, the sole has a honeycomb pattern, which helps spread out and reduce impact forces. The thin sole in the midfoot area, however, offers very little cushioning. 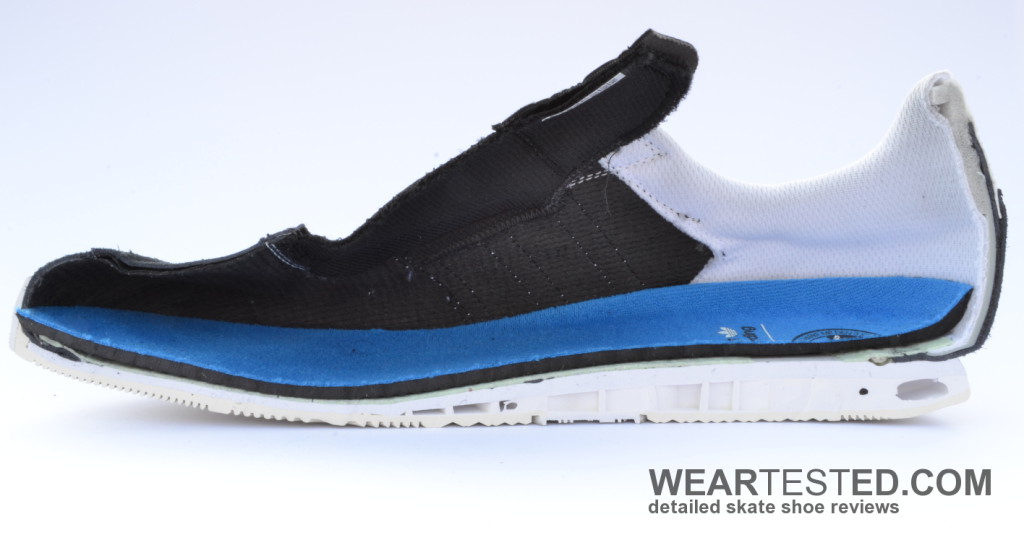 The Silas SLR features a very slim and pointy silhouette, and cuts closely to your foot. This leads to a lot of control when doing flip tricks.

Boardfeel is one of the strengths of the Silas SLR, mostly due to the very thin sole in the front foot area and its slim insole. Surprisingly, the height difference between the toes and the heel does not destabilize the foot at all. The overall grip is good, due to the sole structure in the front foot area. As mentioned before, first signs of wear out spots appeared at the end of the testing time, but this did not decrease grip.

The Silas SLR is cut rather high around the Achilles tendon, but much lower around the ankle. This combination leads to a snug fit. The seamless front foot area is a bit wider. The tongue is fixed and slim, which does increases ventilation but not stability. The weight of the Silas SLR is average for cupsoles. In terms of stability, this model had us sold. The two piece sole features a typical cupsole structure in the frontal area, an open midsole, a retro-runner look, in the back. The assumption that stability suffers because of the decrease in surface area support for skateshoes, but this rather unusual construction had us convinced that this was not the case. The cohesion of two different characteristics of the sole is perfect; the heel area delivers amazing stability, while the front foot area delivers flex and boardfeel.

The Silas SLR convinces with great stability and durability. The rather shallow pattern of the sole and only average cushioning are balanced out by the shoe’s great board feel.